“We got a baseline,” Bourdais told the IndyCar Radio Network. “We didn’t test here because we only have one test day left at Gateway. We pretty much through the kitchen sink at it and the guys did a real good job. The car is real close, I think.”

Here’s your top 10 after our first practice session at @Mid_Ohio 🏎💨#INDYCAR // #Honda200 pic.twitter.com/8F8HJaWHsi 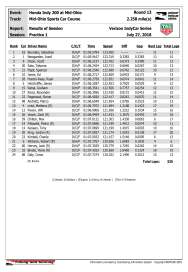 Of note during the session:

* Takuma Sato went off the track briefly with about 30 minutes left in the session, but was able to recover and continue on without incurring any damage.

* Matheus Leist slid off the track entering Turn 5 in the hairpin turn, bringing out a brief red flag practice stoppage. Leist did not hit anything and was able to get his car back on-track.

* Robert Wickens pulled his car off the track after a puff of smoke came out of the rear of his No. 6 Schmidt Peterson Motorsports Honda, bringing out a brief flag.

Another one. We’re red after @robertwickens pulls off track with smoke trailing from his car.#INDYCAR // #Honda200 pic.twitter.com/V0nG1w6Fdo

* With just over three minutes to go in the session, Zach Veach looped his car, didn’t hit anything and was able to continue on.

“I was coming with a big head of steam on hot tires, and by the time I turned in and saw the yellow, the 14 was backing up because he had a little clearer vision,” Kimball said. “I feel bad about getting into the 14. Hopefully, it didn’t do too much damage to him and us.”

Added Power, “It was pretty hectic. I was worried that I spun at the crest of hill and nobody could see you. The car isn’t that bad. We’re creeping up on it, understanding what we need.”

There will be one more practice session today at 2:30 p.m. ET, followed by a session Saturday morning before qualifying takes place early in the afternoon to set the field for Sunday’s race.

* Conor Daly is back for a second straight race in the No. 88 for Harding Racing. Daly replaced Gabby Chaves at Toronto, finished 13th.

This is determination. @PiFitti scoots out to pit lane for his first race weekend since his crash three months ago at SPA where he broke both bones in his left leg and right ankle. pic.twitter.com/tNVmP1SdPg