Rossi led 66 of the race’s 90 laps, including the final 34 laps, capturing his second win of the 2018 season (also won at Long Beach). He finished a commanding 12.8285 seconds ahead of runner-up Robert Wickens to capture the fourth win of his IndyCar career. 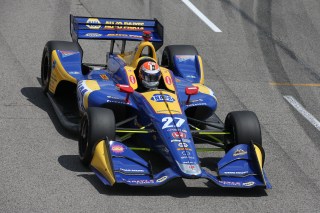 It’s also the first time in Rossi’s three-season IndyCar career that he’s won more than one race in a season – and there are still four more races remaining for the Andretti Autosport driver to add to his 2018 wins mark.

“It’s what we needed,” Rossi told CNBC. “We said coming into this weekend that we had to execute for five weekends in a row. This is the start of that, hopefully.

“It was great strategy early today. We knew we could two-stop if we committed early and that’s what we did.”

Ironically, while doing a celebratory burnout, Rossi spun into the frontstretch grass and got stuck. He had to wait to be pulled out so he could move on to victory lane.

This year’s Indianapolis 500 winner, Will Power, finished third, leaving him still winless in his career at the 2.2-mile permanent road course in north-central Ohio.

Dixon came into Sunday’s race with a commanding 62-point lead in the Verizon IndyCar Series standings over Newgarden and a 70-point lead over Rossi.

After Sunday’s race, Dixon leads Rossi by 46 points and has a 60-point edge over Newgarden.

“We’re thinking about (the championship), but we’re also focused on just race wins,” Rossi said. “We’ll take a very well-deserved break before Pocono (the next IndyCar race on August 19), we’ve been strong there the last two years and just try to do what we did today.”

Added Newgarden, “We did what we could to try and cover our bases with Scott and some of the other championship runners and it didn’t work out. For the most part, it just didn’t fall the way we needed it to. … It’s IndyCar racing. You can’t predict these perfectly every time.

“You make the best bet possible and sometimes it works out and sometimes it doesn’t. It was an okay day. We gained some ground on Scott, which is good, and it tightens up the battle a little bit, but we need to make up more ground in the next race.”

Sebastien Bourdais rallied from the back of the field to finish sixth, followed by Ryan Hunter-Reay, Simon Pagenaud, Graham Rahal and Ohio native and IndyCar rookie Zach Veach.

Rossi regained the lead on Lap 50. By Lap 58, he had built a one-lap lead over Wickens and Newgarden. Rossi made his final pit stop on Lap 60, turning the lead over to Wickens, who still had one more pit stop himself.

Rossi finally regained the lead for the final time when Wickens pitted on Lap 66. 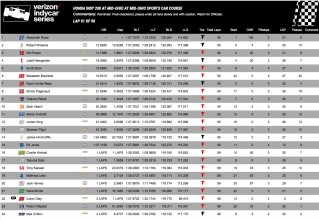 Among incidents in the race:

* While there were numerous incidents during the three practices and qualifying Friday and Saturday that brought about red flag stoppages, there were zero yellow caution flags in today’s race, a rarity.

* Pole-sitter Alexander Rossi almost caused a huge crash on the opening lap when appeared to he brake-check the field heading into Turn 1. Race Control officials reviewed the incident but chose not to penalize Rossi.

* Max Chilton, who started with a career-best sixth position, was sent to the back of the field after being assessed a drive-through penalty for tapping Takuma Sato. Sato did a 360-degree spun but did not hit any other car or wall at the end of the front straight in the Lap 2 incident.

Chilton went off-strategy and pitted on Lap 11 and suffered additional time when his team struggled on the pit stop wit a defective air gun to take his left side tires off.

All that combined led to Chilton falling to last in the 24-car field, where he finished.

* Déjà vu: Josef Newgarden passed Will Power at the end of the back stretch to win last year’s race, and then did it again Sunday to take the lead from Rossi on Lap 27. However, the lead was short-lived as Newgarden quickly came into the pits on the following lap. Rossi regained the lead, choosing to stay out for two more laps, hoping to make the finish on just two pit stops.

* Shortly after Rossi finally pitted, Robert Wickens took the lead on Lap 30 and quickly built up a 13-plus second lead over Will Power. Wickens pitted on Lap 40, turning over the lead to Power. 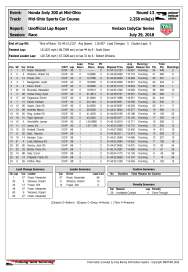 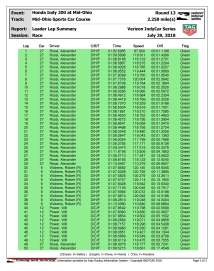 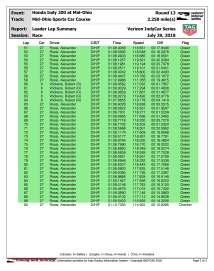