Alexander Rossi drafted by pole sitter Will Power on a Lap 6 restart, and then proceeded to utterly dominate Sunday’s ABC Supply 500. The Andretti Autosport driver led 180 of 200 laps and withstood a second-half charge from Power, who even briefly took the lead on lap 138 following a round of green flag pit stops, and gapped Power by as much as eight seconds in the final stint on his way to winning by over four seconds.

Power tried keeping Rossi honest, but his challenge was thwarted when he caught the lapped car of Max Chilton in Turn 3 just before making his final stop on Lap 171. Power drifted high, costing him valuable time and allowing Rossi to easily clear him to re-assume the lead, which Rossi never surrendered from there.

Of their Lap 138 battle, Rossi allused to traffic as the cause of him briefly losing the lead, but credited the Andretti Autosport with giving him a fast enough car to get back around. However, he was subdued in Victory Lane given the serious accident earlier in the race involving Ryan Hunter-Reay, Robert Wickens, James Hinchcliffe, and others.

“We came out in some traffic. It was really, really hard to be behind cars for some reason today. But, the No. 27 Napa Auto Parts Honda was better than everyone else. So, it’s an exceptional day, but right now Rob, James, and everyone involved in that, are in our thoughts and it’s really tough to celebrate after what happened,” Rossi said in Victory Lane to NBCSN’s Kevin Lee.

Rossi credited his teammates as well, particularly Zach Veach Marco Andretti, who allowed Rossi by late in the race as he worked through traffic.

“It’s a team, man. I have amazing teammates. Speaking of them, Zach (Veach) and Marco (Andretti) really helped me out there in traffic so I owe them a beer or a case of beers or something like that,” Rossi quipped. “But, it’s just been leaning on Ryan and Michael and Bryan ever since Day 1 to help me really overcome the challenge that is super speedways. And you can’t do any of this without an amazing team. So, very thankful to be on Andretti Autosport have this great group of people.”

Power detailed that a combination of lapped traffic cost him the lead to Rossi, and then more lapped traffic and misfortune on his out lap cost him a chance to challenge Rossi in the final stint.

“Just got a couple of bad runs out of Turn 1, to be honest,” Power said in discussing how Rossi got back by him during the post-race press conference. “Kind of beside me going into Turn 2. Yeah, that was that. Then in the last pit stop, we had a great shot at getting him again. I caught Max Chilton at the worst possible spot in Turn 3, washed right up into the marbles, almost got into the wall.”

Power added, “On the out lap (after the last stop), got a mid shift in second. Lost a second in that whole exchange. That was our only shot to close the gap to him. If we didn’t jump him in that exchange, it was going to be very difficult to get him.”

Rossi and Power were by far the two fastest drivers on the day, and finished ahead of third place runner Scott Dixon by nearly a full lap. Dixon ultimately drove a quiet, but strong race to round out the podium, with Sebastien Bourdais finishing fourth – he was also the final car on the lead lap at race’s end.

Sunday’s race was delayed nearly two hours for a frightening wreck triggered by contact between Ryan Hunter-Reay and Robert Wickens in Turn 2, with Wickens launching into the catchfence. James Hinchcliffe, Takuma Sato, and Pietro Fittipaldi were also collected.

Hunter-Reay, Hinchcliffe, Fittipaldi, and Sato were all checked, cleared and released, while Wickens was airlifted to Lehigh Valley Hospital Cedar Crest, though he was reported as being awake and alert following the crash. Further updates on Wickens’ conditon will be forthcoming.

The race also got off to a somewhat clumsy start, with Graham Rahal and Spencer Pigot spinning after the field jammed up prior to the green flag.

Remarkably, though, the remainder of Sunday’s 500-mile race was completed without a caution.

Of note: Tony Kanaan dropped out on Lap 15 with a broken throttle sensor. It ended a weekend that began with promise – Kanaan was sixth fastest in Saturday morning practice – and continued a frustrating season in which his best finish is sixth at the Honda Indy Toronto.

Also: Despite being far back from Rossi and Power, Dixon, Bourdais, Newgarden, Veach, and Andretti engaged in a closely fought battle for third during the entire race.

Andretti had worked his way into third during the first half of the race, but needed start conserving fuel around the halfway point, which Dixon and the others to close in. Andretti was also consistently the first driver to pit during cycles of stops, and doing so ultimately cost him dearly, as he fell from third to sixth during one cycle before falling to seventh at race’s end.

Veach, meanwhile, had his best race since the Toyota Grand Prix of Long Beach, where he finished fourth. The Andretti Autosport rookie qualified a solid seventh and ran in the top six for most of the day, eventually making a late pass on his teammate Marco Andretti to secure sixth place.

Results are below. The victory is Rossi’s third of the 2018 Verizon IndyCar Series season, and his second in a row – he won the Honda Indy 200 at Mid-Ohio, the race preceding Pocono. 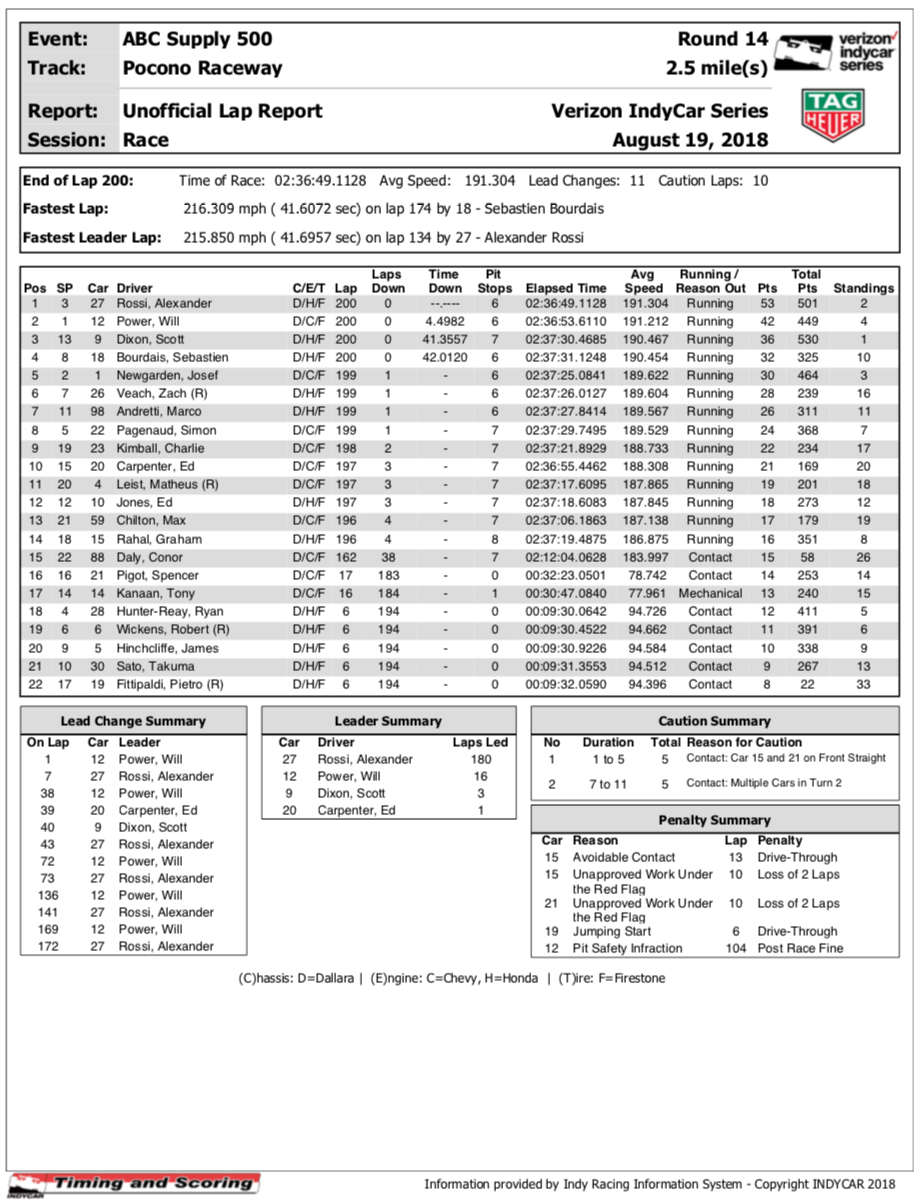