UPDATED (6:33 p.m.): IndyCar officials have decided to forego qualifying tonight due to rain, per a tweet from the series.

As a result, the starting grid for Saturday’s Bommarito Automotive Group 500 at Gateway Motorsports Park will be set by entrant points in the Verizon IndyCar Series point standings.

That means series points leader Scott Dixon will start Saturday’s race from the pole, with No. 2 in the points, Alexander Rossi, on the outside pole.

Due to today's 🌧️🌧️, tomorrow's starting grid will be determined by entrant points.

Final practice has been extended (7:30-9 CT). We'll see you under the lights!#INDYCAR // #Bommarito500 // @GatewayMSP pic.twitter.com/JrV1wZH9GR

Alexander Rossi and Scott Dixon were fastest in Friday’s first IndyCar practice session at Gateway Motorsports Park – but the rain was faster.

The practice session was originally slated to go off at 1:15 p.m. ET, but was postponed for rain and then additional drying of the race track.

Then, just as things got underway shortly after 4 p.m. ET, Marco Andretti brought out a red flag stoppage when the gearbox on his Andretti Autosport Honda failed on-track. Cars returned to the track for about 20 minutes before rain returned in a heavy sprinkle with about six minutes left in the session, cutting things short on the 1.250-mile oval.

Dixon holds a 29-point edge over Rossi in the Verizon IndyCar Series point standings. Newgarden is 66 points back and his Team Penske teammate Will Power is 81 points back, with three races remaining on the 2018 schedule.

Saturday night’s race is slated to take the green flag at 8:30 p.m. ET. However, there is an 80 percent chance of rain in the forecast for that evening. 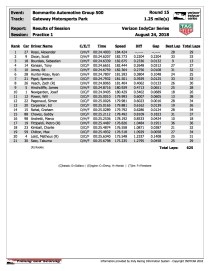