Perhaps leaving the best for last, Alexander Rossi roared to the top of the speed chart in the final two minutes of Friday night’s final practice for Saturday’s Bommarito Automotive Group 500 at Gateway Motorsports Park (8 pm ET on NBCSN).

And, just like in the first practice earlier in the day, Rossi once again was No. 1, and Scott Dixon also waited until the last minute before he grabbed the second-fastest spot again in the second session at 183.022 mph (at 24.5872).

Arguably the biggest surprise of the session was rookie IndyCar driver Pietro Fittipaldi, driver of the Dale Coyne Racing No. 19 Paysafe Honda.

Pietro – the grandson of two-time F1 champion, as well as USAC and CART champion Emerson Fittipaldi – put down a very solid top lap at 182.294 mph at 24.6854 seconds to give him third-fastest speed of the session.

“Obviously I’m happy, the car has a lot of performance,” Fittipaldi told the IndyCar Radio Network. “This is practice, it’s disappointing I’ll have to start from the back tomorrow since qualifying was cancelled (due to rain).

“I know we have a strong car and we’ll do our best tomorrow.” 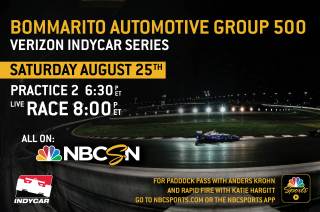 Because rain impacted part of the day’s first practice session, which ultimately ended about six minutes early due to the wet stuff, IndyCar officials subsequently cancelled qualifying and then extended the final practice from a scheduled 60 minutes to 90 minutes.

There was one minor incident in the session. With about 40 minutes left, defending race winner and reigning Verizon IndyCar Series champion Josef Newgarden grazed the Turn 4 wall.

While the contact looked slight, it obviously had a big impact on Newgarden’s Chevrolet-powered ride, as he ultimately parked it with about 23 minutes left in the session after 61 laps around the 1.250-mile oval. Newgarden’s best lap speed was 180.584 mph at 24.9192 seconds, good for 12th-fastest among the 21-driver field

“I made a mistake there and we’re not 100 percent sure with it, but something’s not right with the right rear,” Newgarden told the IndyCar Radio Network. “We just didn’t have enough time to fix it.

“We lost a little bit of track time but I still think we have a good car for tomorrow.”

Dixon holds a 29-point edge over Rossi in the Verizon IndyCar Series point standings. Newgarden is 66 points back and his Team Penske teammate Will Power is 81 points back, with three races remaining on the 2018 schedule. 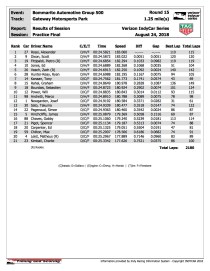 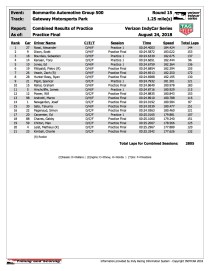