While the rest of the IndyCar world is on the verge of wrapping up the 2018 season, Jack Harvey is just getting started.

Harvey will compete in his fifth and sixth races of the season – this weekend at Portland (Oregon) International Raceway, and two weeks later for the season finale at Sonoma Raceway north of San Francisco.

But he’s not looking at it as the end to the 2018 season. Rather, the 25-year-old driver from Bassingham, England, is hoping to do well in the final two races and use them to build momentum for Meyer Shank Racing going forward into 2019.

“The nice thing for us with these two races back-to-back is hopefully we can build some momentum at Portland and have a good result, and then jump straight into Sonoma. That’s been the hard thing this year, every time we start to build a little bit of momentum and some good rhythm, then we stop with the car for a decent amount of time, where everybody else is either getting rhythm or learning more or just executing well themselves.” 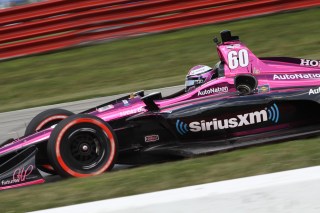 There’s a lot riding on the line for the the first-year Meyer Shank team — which is partners with the veteran Schmidt Peterson Motorsports organization — at Portland and Sonoma.

First, it obviously wants to earn the two best finishes of the season and go into the offseason with momentum in hand. In the four races he’s competed in thus far, Harvey has finished 12th at Long Beach, 16th in the Indy 500, 20th at Mid-Ohio and 23rd in the season opener at St. Petersburg, Florida.

“I think the nice thing for us right now – and this is the goal – is to go out and make sure Portland and Sonoma are our best results of the year because then it does give us some momentum for the off-season,” Harvey said.

Second, the team hopes to increase the number of races it runs in 2019 to 10, perhaps even 12. Strong finishes in the last two races could potentially help attract additional sponsorship that could directly impact how many more races it can compete in.

“It gives us a stronger case to go back to some of our partners and go, ‘hey, the races that were closer together, this is what we achieved and this is what we think we can achieve in a whole season,” Harvey said. “Let’s try to get closer to that.

“If we have a good Portland and Sonoma, that makes our case just a little bit stronger.”

While Harvey and the No. 60 team have their own goals and gameplan in mind heading into this weekend at Portland, one thing they don’t want to do is impact the IndyCar championship battle between Scott Dixon, Alexander Rossi, Will Power and defending Verizon IndyCar Series champion Josef Newgarden.

“I’ve been conscious of that, even back at Mid-Ohio,” Harvey said. “You don’t want to do anything that’s going to swing it one way or other. We just want to go about our day the best way we can, frankly.

“Now, if it just happens we beat someone who didn’t get the points they needed, that’s different. We don’t want to be the person that gets in any silly tangles at the start of any races or any penalties for blocking.

“Honestly, if something is going on on-track, I’m not just going to let people push me around. But like at Mid-Ohio at one point, we were a lap down and I wasn’t fighting for anything, and at that point I moved out of the way (of potential championship contenders).

“If we’re talking about racing hard and there’s an opportunity for us to get on the podium, but it’s a championship contender, if the opportunity is there to overtake them cleanly without any problems, we’re absolutely going to go for it. If it’s 50-50 on the last lap, we don’t want to be ‘that guy’ (that could cost one or more of the four remaining championship-eligible drivers valuable points).”

Speaking of the championship, Harvey was asked who he thinks will take the 2018 title.

“Alexander Rossi has had some momentum with him this year,” he said. “Honestly, he’s had it since St. Pete. He’s been one of those guys every weekend who looks like he can win, which is incredibly difficult to do in a series like this.

“And then you’ve got the Ice Man (Scott Dixon). He’s absolutely named so. It’s hard to write him off. People regard him as one of the best ever.

“So, I think it’s an interesting dynamic you’ve got, momentum and desire for never having won a championship is with Alexander, but I know Scott and I know how badly he wants to keep winning. Plus he’s had the experience and has been there and done it. You have people coming at it from different sides. I don’t know who you’d put your money on but I think it’s interesting the way the season is shaping up.”

And even though they’re 68 and 78 points behind Dixon, respectively, don’t count out Power and Newgarden.

“I think right now, it’s been spoken about that it’s a two-horse race between Alexander and Scott,” Harvey said. “But I’ve seen IndyCar massively shift in the last few races.

“If you’re mathematically still with a chance within a reason, you absolutely have a chance. I think it’ll be really interesting to see what happens in Portland and Sonoma.”

As for what Harvey wants? “We’re going to go and do the best we can. And if we hit our goals and objectives, then happy days!”