While Practice 1 for Sunday’s Grand Prix of Portland (2:30 p.m. ET, NBCSN), Practice 2 was a bit more frantic as several drivers had varying degrees of off-course excursions during the session.

However, Team Penske’s Will Power kept things clean and turned the fastest lap of Practice 2 at 57.4053 seconds. Power topped Andretti Autosport’s Marco Andretti by roughly six hundredths of a second, with Andretti’s quick lap standing at 57.4668.

Santino Ferrucci, on his return to the Verizon IndyCar Series this weekend in the No. 39 Cly-Del Honda for Dale Coyne Racing, was an impressive third in Practice 2. Scott Dixon and Jack Harvey rounded out the top five.

Among the drivers who were visibly pushing the limits of the track was championship contender Alexander Rossi, who enters the weekend 26 points behind leader Scott Dixon. Notably, Rossi was particularly aggressive in Turns 10, 11, and 12, even going wide on the exit of Turn 12 on more than one occasion due to brake lockup or understeer.

However, while he always managed to gather it back up and continue on without incident, two other drivers were not quite as lucky.

Both Takuma Sato and Simon Pagenaud nosed into the Turn 12 barrier in separate incidents during Practice 2 – Sato’s came 22 minutes into the session, while Pagenaud’s incident came at the 40-minute mark.

Ouch. @TakumaSatoRacer gets into the tires here at @portlandraceway. After a brief yellow flag, we've got 30 minutes left in Practice 2.

Another red flag waves as @simonpagenaud gets into the wall in Turn 11.

The session was red-flagged for both incidents, though both Sato and Pagenaud only suffered front wing damage and were able to drive back into the pits for repairs – both continued on during practice.

Of note: Rossi was 23rd quickest Practice 2, while Pagenaud and Sato ended up 13th and 21st respectively.

Other notables include Sebastien Bourdais (10th, after leading Practice 1), Carlos Munoz (16th), and Pietro Fittipaldi, (19th, after missing Practice 1 due to a brake issue). 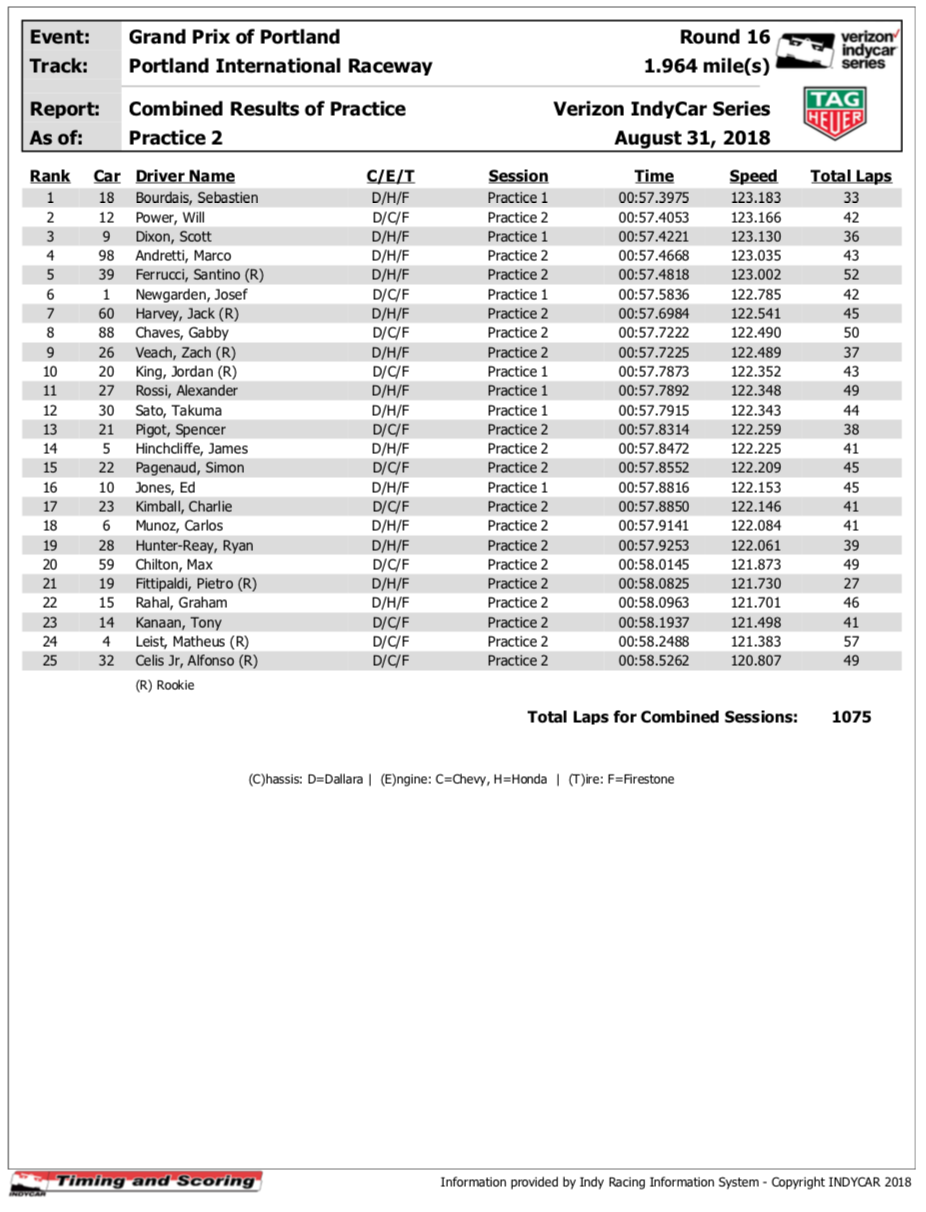