Verizon IndyCar Series driver Robert Wickens, seriously injured in a crash during a race at Pocono Raceway nearly two weeks ago, has been transferred to Indiana University Health Methodist Hospital in Indianapolis for further treatment of his injuries, according to a statement released this morning by his team, Schmidt Peterson Motorsports. 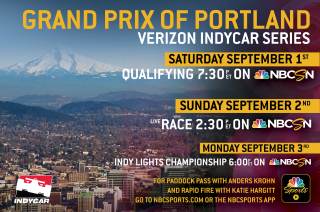 Wickens had been hospitalized at Lehigh Valley Hospital — Cedar Crest in Allentown, Pennsylvania, since suffering injuries to his spinal cord and column, lower extremities and right arm in a violent crash during the ABC Supply 500. His car made contact with the car of Ryan Hunter-Reay, sending Wickens airborne and into a catch fence, spun several times in mid-air and came to rest along the inside retaining wall on the Lap 8 incident.

Last weekend, the team issued another statement that Wickens was breathing on his own without assistance and is able to talk.

MORE: IndyCar rallies together in wake of Robert Wickens accident

Here is the update statement on Wickens’ condition, tweeted out by the team this morning: