PORTLAND, Oregon – Race car drivers are like elephants: they have incredible memories and never forget, be it a good race, a bad race – or a run-in with an opponent.

Sebastien Bourdais is definitely in that category – the good side, that is.

While the majority of Verizon IndyCar Series drivers are making their maiden voyage around Portland International Raceway this weekend, Bourdais is the most seasoned and successful driver at PIR in the field for Sunday’s Grand Prix of Portland.

Even though he last raced – and won – at PIR in 2007, there’s no debating his career mark there.

His only bad outcome was 14th in his first start there in 2003, when he suffered mechanical failure to his rear wing with nine laps remaining in the race.

And going back to the drivers-never-forget theme, Bourdais proved during Friday’s first practice that he hasn’t lost his touch around PIR. 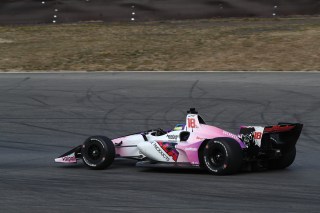 Behind the wheel of the Dale Coyne Racing with Vasser-Sullivan No. 18 Gorilla Automotive Products Honda, Bourdais was the fastest around the track of the 25 drivers entered in the race at 123.183 mph at 57.3975 seconds, both new track records.

It was a good indicator of potential things to come for this weekend, albeit there is still one more practice Friday afternoon and another Saturday before qualifying.

Still, Bourdais has to feel encouraged, especially after the way he made a quick exit following a first-lap crash last Saturday at Gateway Motorsports Park.

Portland will be the 187th IndyCar start for Bourdais, now in his 13th season in the series. He comes into this weekend with 37 career wins (31 in CART/Champ Car, including four consecutive championships from 2004-2007, as well as six wins in IndyCar), which is sixth on the overall all-time open-wheel wins list in the U.S.

While he looked like he hadn’t missed a step in Friday’s first practice, Bourdais admits PIR has changed a lot.

“It’s very different,” Bourdais told MotorSportsTalk. “The curbing situation makes the track very different. Turn 7 is reconfigured. There’s actually not really much that transfers over. The car feels very different. Everything’s changed so much, the pavement has changed. … It’s almost like it’s a different place.

“Overall, I think our road course setup has been pretty good and competitive. We’ve qualified third twice, we should have won Barber. With the aero package, we find the setup that suits me. Things line up and I have good conditions. It was sprinkling all morning and it wasn’t when i did my laps, so that could be some factor. It’s really, really tricky.

“Still, it’s a good start. It was a pretty good day yesterday during the test here. Hopefully, we can carry on.”

While Bourdais is out of the championship battle (he’s currently 10th in the standings with 334 points), he still has plenty of incentive to race for both this weekend as well as the season finale at Sonoma Raceway.

With four top-five finishes in the first 15 races (fourth at Indy Grand Prix and Pocono, and fifth at Birmingham) two other top-10 showings, Bourdais would love to bookend the 2018 campaign, beginning with a win in the season opener at St. Petersburg with wins at Portland and Sonoma.

“I am looking forward to going back to Portland,” Bourdais said. “The track is challenging, the fans are knowledgeable and the atmosphere at the track was always fun.

“I’ve had some success there and I guess I am the longest defending champion ever since I won the last time we raced there in 2007.”

Bourdais is glad to see the series back in the Pacific Northwest. Fans are, too, as the reserved seats at PIR have been sold out for the last month and there’s been talk that the grandstands could make it sellout on Sunday.

“There were a lot of attempts over the years to come back here, but they just never materialized,” Bourdais said. “Now we’re getting some recognition, and there was a lot of public awareness, a lot of people wanted us back, there was a big push from the city and community. Finally, we got enough of it that could make it happen. I think everybody’s pretty excited.”

Then, Bourdais adds, “I just hope it (his success at PIR) repeats itself.”

While Thursday’s two test sessions and this weekend’s three practice sessions will be a big help, Bourdais — who was only 10th fastest in Friday’s second practice (there’s one more on Saturday morning before qualifying) has his eyes set in another area.

“Qualifying, as it is on any road course will be important,” Bourdais said. “Fortunately, we got to test there on Thursday so that is good.

“I’m just looking forward to getting back on a road course and hopefully having a good race for our sponsor Gorilla Automotive Products.”

Not only has the Le Mans, France native been proficient in racing at PIR, he also has qualified top-five in his five previous starts there, including a pole in 2004 and a pair of third-place starts in 2006 and 2007.