PORTLAND, Oregon – Using a combination of adept fuel mileage and sharp strategy, Takuma Sato was the surprise winner in IndyCar’s return to Portland on Sunday.

The Rahal Letterman Lanigan Racing driver captured his third career IndyCar win, following up his previous win in the 2017 Indianapolis 500.

“This is big,” Sato said. “Fantastic weekend. Obviously, with the couple of hard, physical weekends, especially at St. Louis (Gateway), we did save fuel and it didn’t work, but you have to keep on going and this time I think the fuel strategy worked really well.

“Most importantly, the No. 30 Mi-Jack / Panasonic car had pace so I could commit. Looking at the fans here in Portland, so enthusiastic, I think this is one of the most beautiful days in my life again.”

Prior to Sunday’s Grand Prix of Portland at Portland International Raceway, Sato’s best finish this season was third at Iowa, followed by fourth at Road America and fifth in Belle Isle 1.

“We gave that one away,” Hunter-Reay said. “The DHL car was the car to beat today. We had the right fuel, but we had some miscommunication on pit lane. I was saving fuel as Takuma came out of the pit lane and so I didn’t attack.

“That miscommunication probably cost us the race. I’m pretty bummed right now. I know we had a car to win and all day long. I tried really hard to save that fuel and made the fuel mileage the stand was requesting, but couldn’t pay off for it in the end.”

Sato has now won races on a street course (Long Beach 2013), an oval superspeedway (Indianapolis 2017) and now on a permanent road course at Long Beach. He hopes to add a short track oval win to his resume next season.

Dixon had fallen as much as 14 points behind top championship challenger Alexander Rossi early in the race, but battled back to not only regain the lead, he also finished higher in the race as Rossi finished eighth. Dixon leads Rossi by 29 points heading into the season finale at Sonoma Raceway on Sept. 16.

The other two championship contenders, race pole sitter Will Power and teammate and defending series champ Josef Newgarden, are still mathematically in the championship battle, but the odds are long for both going to Sonoma. Power, who finished 21st, is 87 points behind Dixon, while Newgarden, who finished 10th, is also 511 points back. With a maximum of 108 points available at Sonoma, it will be very difficult for Team Penske to earn its third consecutive IndyCar title.

Things got off to a big bang on the opening lap when Zach Veach made contact with James Hinchcliffe, triggering a six-car wreck that left Marco Andretti’s car nearly upside down.

Rescue workers quickly righted Andretti’s car and he was uninjured. He even was able to get back into the race.

Graham Rahal and Ed Jones were also collected. Rahal and Hinchcliffe rejoined the fight to pick up positions, though Rahal soon pulled off after making up two spots and was credited with 23rd. Hinchcliffe ran the remainder of the race, though he finished 29 laps off the lead in 22nd.

Dixon was also hit in the rear, dropping him to 21st position. His car suffered minor damage and after a quick pit stop for repairs, was back on-track.

Then, on Lap 8, pole sitter Will Power suffered a mechanical issue – he appeared to lose the use of first gear – dropping him from the front of the field to 12th. He later nosed into the Turn 11 tire barrier on Lap 43, but was able to return to the pits.

However, Power soon reported that he couldn’t shift gears at all in his No. 12 Verizon Team Penske Chevrolet, and he dropped as many as eight laps off the lead while the team made repairs.

Alexander Rossi and Josef Newgarden looked like they were headed for strong days in the first half of the race – Rossi led most of the opening stint after Power’s trouble, while Newgarden briefly led after passing Rossi on Lap 49.

However, a Lap 56 caution – Zach Veach spun off course in Turns 10 and 11 – ruined their strategy, as each was looking to to make three pit stops. The ill-timed caution forced them to pit, and they dropped to 16th (Newgarden) and 17th (Rossi) at the time.

At the checkered, Rossi could only work his way up to eighth, while Newgarden could do no better than 10th.

As a result, Dixon leads Rossi by 29 points entering the season-ending INDYCAR Grand Prix of Sonoma. Power and Newgarden and tied for third, 87 points back of Dixon, but long shots for the championship now.

“It was a huge day for the team today and feels like a win for us,” Dixon said. “The points, whatever it is, is not a huge amount. I couldn’t see anything once I got off in the dirt at the start, it was just dust everywhere.

“Then I kept getting hit and hit and thought, ‘Oh, this isn’t going to be good.’ Luckily, we were able to keep the PNC Bank car running, back up from the incident and continue. What a crazy day.” 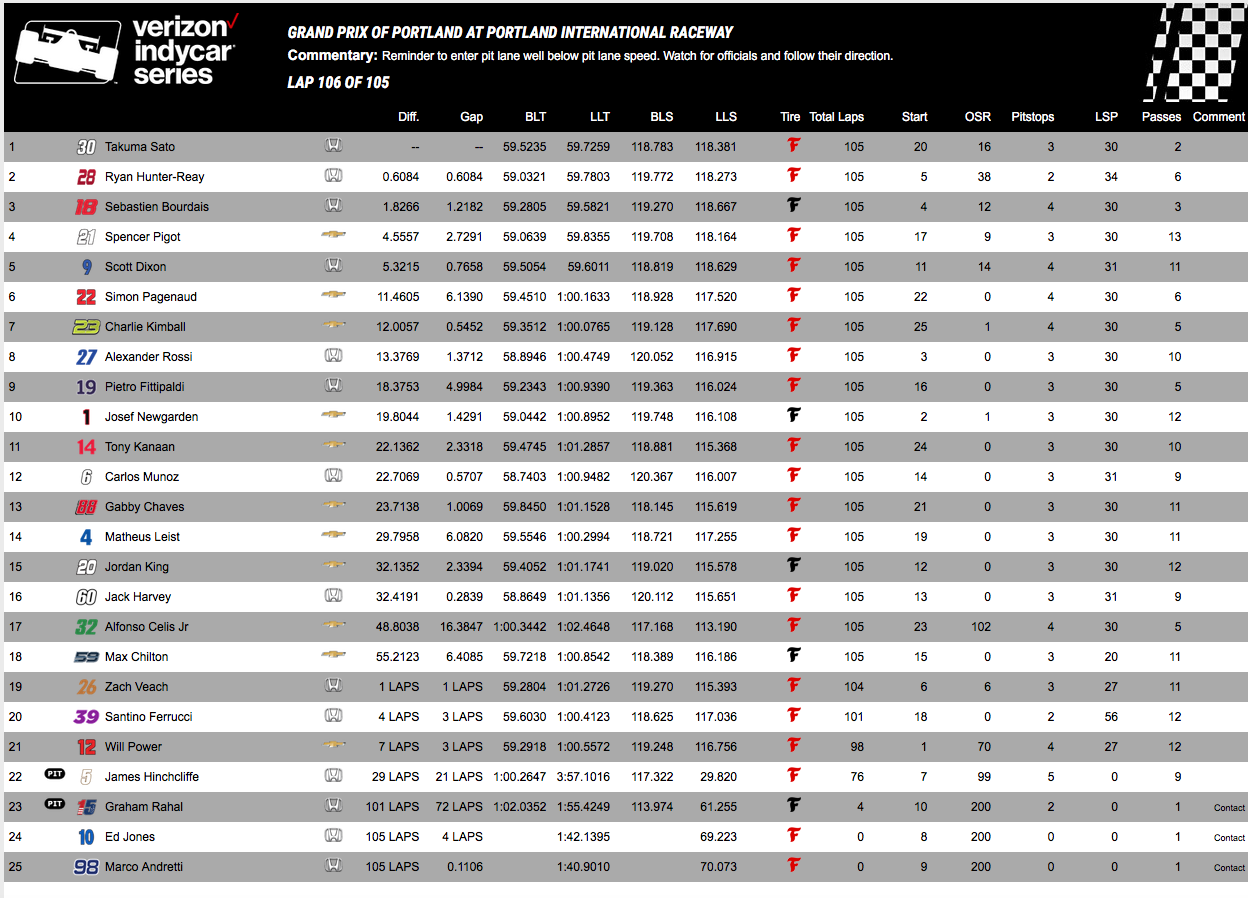