There’s no question that Scott Robert Dixon is also rightly included in that select group of the greatest race car drivers that the Indy car world has ever known.

The soft-spoken, humble native of Auckland, New Zealand has been the greatest and winningest driver on the American open-wheel scene over the last 15 years – and likely with many more years and even greater success still to come. 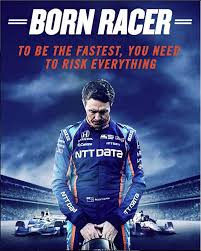 With 44 career IndyCar wins as a foundation, Dixon has built a career that potentially could see him earn a fifth Indy car championship (which would be second-most behind A.J. Foyt’s seven titles) in Sunday’s 2018 season-ending and championship-deciding Grand Prix of Sonoma at Sonoma Raceway.

Because he’s so unassuming and modest, the 38-year-old Dixon isn’t always immediately recognized for the outstanding accomplishments he’s achieved behind the wheel, driving the last 16 years of his 18-year IndyCar career for team owner Chip Ganassi.

That’s why “Born Racer,” the new documentary about Dixon, his life, his team, his family and the sport is eagerly being anticipated. The powerful and inspirational biopic is to be released Oct. 2 in the U.S.

A press release for “Born Racer” aptly describes Dixon and his life story this way:

“A powerful and inspirational story of dedication, danger, fear, and the rare ‘will’ some of us have to defy all personal limitations. It’s about desire for success and accomplishment and the search for ultimate meaning, purpose in life; a narrative on the unforgiving world of professional racing and the unique individuals who inhabit it.”

The all-access film gives race fans – from the casual to the most avid – a rare behind-the-scenes view of Dixon not just in his four-wheeled, 220-plus mph rolling office, it also delves deep into why race car drivers like Dixon flirt with danger and risk their lives in order to win.

“Born Racer” also takes a very intimate and up-close look at Dixon and his two families: his life with wife Emma and their children Tilly and Poppy, as well as Scott’s other family, his co-workers and teammates at Chip Ganassi Racing.

With its compelling and breath-taking action footage of the world’s fastest and most diverse racing series, “Born Racer” (www.bornracermovie.com) is destined to be not only the authoritative story of what makes Dixon the true champion he is, but also the outstanding human being he is, as well.

“Born Racer” will be available on DVD and digital download.

Here’s the trailer for “Born Racer”: