SONOMA, California — Ryan Hunter-Reay was fastest in the first of two practices for the Verizon IndyCar Series Friday morning.

Of note, Newgarden did not even take to the track during the entire practice as the team worked on what reportedly was a possible fuel pressure issue in his race car.

On top of that, Newgarden is battling what he called food poisoning, but hopes to be much better by Saturday.

There were three incidents of note during the 45-minute session:

* About 15 minutes in, championship contender Alexander Rossi spun in Turn 5, but was able to continue on.

* With about 20 minutes left in the session, James Hinchcliffe spun in Turn 2, winding up in the tire wall. Damage was minimal, he brought his car into the pits, repairs were made and he was back on-track for the final 8 minutes.

Ouch. @Hinchtown into the wall.

* Hinchcliffe spun again in Turn 7 (the hairpin) as time expired in the session.

There was almost an incident when Dixon almost ran into Spencer Pigot of Ed Carpenter Racing late in the session, as well. 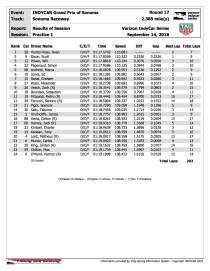 A little 👋 from @scottdixon9 👀

One race. One champion. Who will it be?

An @indycar champ will be crowned in Sonoma Sunday on @NBCSN! pic.twitter.com/gstrb3NqYg