SONOMA, California – Scott Dixon concluded an outstanding season marked by uncanny consistency and a bit of luck when he needed it, capturing his fifth career IndyCar championship in Sunday’s season-ending Grand Prix of Sonoma.

“Man, this is so awesome, I can’t believe it that it’s actually happened,” Dixon said after the race to NBCSN. “I don’t know, you always doubt these situations, that it’s never going to happen.

“I can’t thank everyone enough, my wife Emma, the team, my teammate (Ed Jones), everybody involved. This doesn’t come without a lot of hard work. We had a lot of grit, had a lot of things that could have gone wrong today.

“I have to thank the other teams we fought hard with this year, Penske and Andretti, this season. Rossi did a hell of a job all year. He’s been pushing so hard this year. He’s a huge talent and one that is going to win a lot of championships in his career.”

Dixon becomes only the second driver to capture five Indy car championships and the first to do it in 51 years. The other five-time winner – actually, he went on to win seven titles – is the legendary A.J. Foyt. It’s also the 12th career IndyCar championship for team owner Chip Ganassi.

Rossi gave it everything he could, but he was behind the 8-ball for most of the race, starting with inadvertent contact on Turn 3 of the opening lap, running into the back end of Andretti Autosport teammate Marco Andretti.

The wreck damaged the right front wing of Rossi, as well as caused a flat right tire, forcing him to drive around the entire 12-turn, 2.52-mile track before he was able to pit for service, and he played catch-up from that point on.

“I got a good start and don’t know if he lifted or I misjudged it or whatever, but it is what it is,” Rossi said of his contact with Andretti. “It was going to be a tough day to beat Scott anyways. It’s unfortunate to go out like that.

“It was just two cars going for the same spot. … I wish I could replay that a million more times. At the end of the day, we have to look at 2018 and be pretty happy with it.

“Obviously, it’s disappointing to come away second and the first loser, but we have lots to work on and improve for next year.

“I’m happy about (finishing second in the championship), but I expect a lot out of myself and the people around me. There’s points in the year that I definitely made some mistakes and didn’t have things go our way, so we’ll look to improve upon that and be even better for Year 4 and hopefully come out of the box and lead it the whole way.

“Huge congratulations to Scott. He’s a five-time champion for a reason and it was a pleasure to race him all year, and we’ll try to one-up him in September 2019 (the final race at WeatherTech Laguna Seca Raceway).”

Rossi also made contact with Jordan King during the first half of the race when they tapped tires, but both drivers were able to continue on.

The rest of the top-5 in the race were Will Power in third, followed by teammate Simon Pagenaud, who won the previous two races at Sonoma, and Marco Andretti.

Hunter-Reay dedicated his win to fellow IndyCar driver Robert Wickens, who was seriously injured in a crash that included Hunter-Reay nearly a month ago at Pocono Raceway. It was also a good birthday present for Hunter-Reay’s wife, Becky. 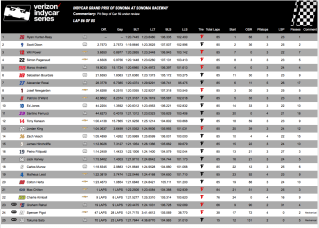 As for other teams, it was a tough day for Rahal Letterman Lanigan Racing.

Takuma Sato, who won two weeks ago at Portland, saw his hopes of making it two wins in a row go up in smoke as the motor on his Rahal Letterman Lanigan Racing blew up just 16 laps into the race.

Sato’s teammate, Graham Rahal, brought out a yellow caution flag on Lap 43 when he lost power in his car. His team took the car back to the garage, swapped batteries and returned to the race 15 laps down.

On Lap 50, several drivers were involved in a multi-car spin in the Turn 11 hairpin including James Hinchcliffe and Jordan King. But there was no caution flag thrown as all of the cars involved continued on.

Matheus Leist and Carlos Munoz were both penalized for failure to avoid contact.

We’ll be back with more shortly. Please check back soon.

Notes: Tony Kanaan finished 12th in his 300th consecutive start as an Indy car driver (also the 360th overall start of his career). … Team owner Roger Penske captured the 500th win of his tenure as a multi-faceted motorsport team owner, including IndyCar and NASCAR. Driver Brad Keselowski, who gave Penske his first NASCAR Cup championship in 2011, won Sunday’s race at Las Vegas to make it 500 wins for “the Captain.”