INDIANAPOLIS – Monday night’s debut of “Born Racer,” the documentary about Scott Dixon, his life and his 2017 IndyCar season, can best be described in one word:

The nearly 90-minute biopic was so well done that it will likely raise the bar even higher on sports documentaries, and give future documentaries an even higher ladder to climb when it comes to accessibility, story telling and excellent editing.

“Born Racer” covered Dixon’s evolution as a race car driver, starting back when he was a young lad racing go-karts in his native New Zealand, to where he is today: the new 2018 IndyCar champion and only the second driver in Indy car history to earn five Indy car championships in a career (A.J. Foyt is the other, with seven titles).

We're almost to the finish line! The cast & crew of #BornRacerMovie gathered today in Indianapolis to celebrate the world premiere. Follow a year in the life of #Dixon9 on Digital and DVD October 2. #IndyCar #DixonDay pic.twitter.com/VoUGPQDF3Z

Produced by fellow New Zealander Matthew Metcalfe, who also brought to the screen “McLaren,” the story of another New Zealander, Bruce McLaren, and his legendary racing teams, “Born Racer” does great justice to Dixon on so many levels.

MORE: ‘Born Racer’: The compelling and inspirational story of Scott Dixon to be released Oct. 2

The film’s cameras are brought into some of the most private parts of Dixon’s life, from his marriage to wife Emma, his devotion to daughters Poppy and Tilly, his quiet determination and confidence behind the wheel, how he tunes out the rest of the world and displays steel-edged focus in the hours before a race, how Chip Ganassi Racing is Dixon’s extended family and so much more.

There are so many cross-sections that intersect throughout the movie. Some will make you smile if not outright laugh. But there are also parts where you’ll likely tear up, like the recollection of the death of Dan Wheldon during a race at Las Vegas on Oct. 16, 2011.

Dixon, his wife, and team owner Chip Ganassi gave extraordinary access to Metcalfe and director Bryn Evans, as well as countless cameras that dutifully recorded so much behind the scenes action, truly giving race fans one of the most personal and in-depth looks at what goes on in the IndyCar paddock, on pit road and of course the race track – not to mention their home and motor coach, their home away from home on race weekends.

The timing and pace/flow of the film was also spot-on. For example, shortly after segments about the start of the 2017 season and flashbacks to Dixon’s racing days as a youth, the movie trumpeted Dixon winning the pole for the 2017 Indianapolis 500 (his only pole of the season).

While there were plenty of smiles and jubilation after earning the pole and then starting the actual race a week later, suddenly and without warning, cameras rolled at countless angles capturing when Dixon – with nowhere to go at 230-plus mph – crashed into the car of Jay Howard late in the 500, prompting Dixon’s to fly several feet into the air, hit the SAFER Barrier head-on and disintegrated around him (including the engine block being sheared completely in half).

And yet Dixon was able to exit the wreckage under his own power, was checked out and cleared at the track medical center (although he did suffer a broken left tibia that left him in a walking boot and on crutches for the following few weeks), and continued his season the following week at Belle Isle.

Let’s face it, motor racing – particularly IndyCar – is a very proprietary sport. Teams don’t want other teams to know what they’re doing or what their secrets are.

Yet Metcalfe’s and Evans’ cameras were seemingly ever-present when they needed to be at the most significant times, catching not only the public, but also the private and even a few secrets.

Going along with motorsports being a proprietary thing, it’s unlikely many – if any – team owners other than Ganassi would have allowed such unprecedented access to a film crew that didn’t hesitate to show the bad along with the good, the tears along with the laughter. 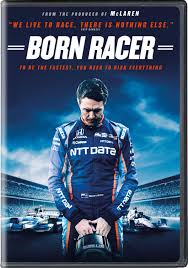 Speaking of Ganassi, a side of him is also conveyed that isn’t as readily seen at the racetrack. He not only is the team’s leader and owner, he also is a fountain of inspiration, has a no-nonsense way of conveying his message of winning each and every race, and also displays an inspirational tone of a deep-thinking and motivation where he comes off as kind of the Vince Lombardi of IndyCar, where winning isn’t everything, it’s the only thing.

The movie ended with two bits of irony:

1) Emma Dixon conceded that although her 38-year-old husband gave it all he could, Josef Newgarden was not to be denied the 2017 championship. Scott Dixon would finish third, 21 points back.

2) But, that being said, comes the other irony: Emma Dixon also believed that for as good as her husband did in 2017, she had a “very good feeling that 2018 was going to be something really special.”

And how prophetic Emma Dixon, herself a world-class athlete (running), proved to be.

While the movie culminated with scenes of the 2017 championship at Sonoma Raceway, a last-minute scene was added to the conclusion, proudly stating that Dixon did go on to have “something really special” in 2018 by winning the championship over Alexander Rossi, Newgarden and Will Power.

“Born Racer” will go on sale on DVD and digital download on October 2nd. If you’re an IndyCar fan or a motorsports fan in general – even if you root for a driver other than Dixon – his story is definitely something that should be in your collection.

It’s one of the most defining pieces ever about what IndyCar is, what it’s made up of, as well as the people like Scott Dixon that make it up.

To pay homage to the late, great Roger Ebert, “Born Racer” is definitely a two thumbs up story.