On the heels of his $1 million win and triple crown championship, Eli Tomac is already anticipating the 2019 Monster Energy AMA Supercross season. The 17-race season drew more than one million fans in 2018.

“We’re really looking forward to defending the Triple Crown Championship in 2019,” Tomac said in a press release. “The team was excited to take home the inaugural championship last year, and the three Main Event format is the same as the Monster Energy Cup, which we just recently won. Of course, the goal is always to win the overall Supercross Championship, but these races should be fun for the fans because they are short, fast and intense.” 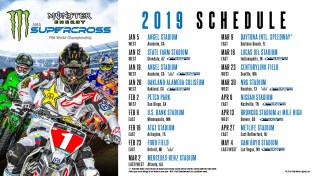 In 2019, the three cities to host the Triple Crown will Anaheim, California at Angel Stadium, Detroit’s Ford Field, and Houston’s NRG Stadium.

Anaheim’s race will run on January 19 in conjunction with the third race on the schedule. Detroit will be held February 23 and Houston will run on March 30.

During these weekends, three Main Events will be run instead of the typical one. Qualification races will advance 22 riders into the mains in each class. Olympic-style scoring will allow contribute to the riders’ overall position, which in turn will award championship points.

I addition, two 250SX class East/West Showdown races are part of the schedule. On March 2 at Mercedes-Benz Stadium in Atlanta and May 4 at Sam Boyd Stadium in Las Vegas. The fastest 22 riders from both regions will get a rare opportunity to race head-to-head in these events.

“I think the East/West showdowns are really cool and a fun change in the schedule, especially for the fans,” said Christian Craig of GEICO Honda. “The best part is probably finding out which coast is more dominant or if they are pretty even.”

The 2019 season will also feature the highly anticipated runs of four rookies in the premier class. Joey Savatgy, Justin Hill, Zach Osborne and Aaron Plessinger will all debut on 450s January 5 at Angel Stadium.