For diehard fans of sports car racing, the countdown has begun. The 2019 Rolex 24 Hours of Daytona — the 50th anniversary, no less — is 50 days away and will be seen in its entirety on NBCSN and the NBC Sports App.

Complete details and a full schedule can be found at IMSA.com.

Race day coverage begins on Saturday, January 26 at 1 p.m. ET with a preview of the upcoming race on NBCSN that will originally air on Thursday, January 24 at 2 p.m. 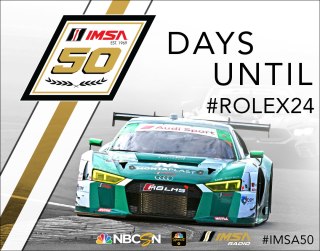 Stay tuned to NBCSN at 2 p.m. for the countdown to green and the opening stage of the twice around the clock classic.

From 5-9 p.m., coverage shifts to the NBC Sports app before returning to NBCSN from 9 p.m. until 3 a.m. Sunday morning.

Make the switch back to the NBC Sports from 3-6 a.m. and then return to NBCSN from 6 a.m. until the checkered flag waves and post-race is concluded at 3 pm.

Before race day activities begin, tune into NBCSN on Thursday, January 24 for qualification from 3-5 p.m.