American teen race car driver Jaden Conwright is looking forward to what’s next for his career after an outstanding rookie season in the Asian F3 series.

Conwright earned five podiums – including one win and two poles – en route to finishing third in the championship standings in the series’ inaugural season.

That was quite an achievement, given that Conwright sat out the previous 20 months, his last race being the 2016 Italian F4 championship.

Now after his Asian F3 debut for Absolute Racing – which included finishing outside the top-six just twice in 15 races – it’s time for the 19-year-old Fremont, California native to put his career into the next gear.

“It’s definitely been a good season,” Conwright said. “For somebody who lives and breathes racing like I do, taking a year out to test in 2017 was not easy, but it was the right decision and the prospect of rejoining the grid in 2018 kept my motivation levels high.

“More importantly still, I made sure to apply everything I learned last year to come back stronger than ever, and to achieve the results that we did was extremely satisfying. 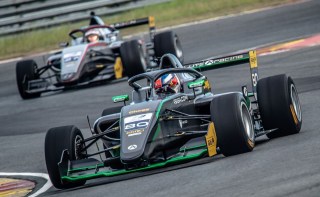 “Racing and testing require two completely different mindsets, and whilst my lap times were pretty good right from the outset, it took slightly longer to fully blow the cobwebs away in race situations, where I was a little bit rustier and had to re-adapt to things like standing starts and wheel-to-wheel battles – but I made consistent progress in terms of my driving and mental approach throughout.”

Conwright, a former World Speed Motorsports Rising Star Award winner, continues to work toward obtaining his FIA Super License with his sites set on continuing up the open-wheel racing ladder.

“Working with Absolute Racing was a total pleasure,” Conwright said. “It’s a real family environment and I honestly couldn’t have asked for a more supportive or capable group of guys behind me, and to be able to measure myself against such a high caliber of rivals in Asian F3 was very positive for my own career development.”

As for the future, “I’m not sure what’s in store just yet,” Conwright said. “But I definitely want to continue my progression in single-seaters – be that in Asia, Europe or back home in the US – because I still have more to learn in the discipline, and plenty of unfinished business.”