28 races from four different series to be televised on NBCSN

DAYTONA BEACH, Fla. – As fans get ready for IMSA’s 50th Anniversary season in 2019, they can start marking their calendars to watch their favorite IMSA Challenge and Single-Make series in 2019 as the sanctioning body, in conjunction with NBC, today announced the broadcast schedule for four series.

As part of the IMSA’s new agreement with the NBC Sports Group, 28 races from the IMSA Michelin Pilot Challenge, IMSA Prototype Challenge, Porsche GT3 Cup Challenge by Yokohama and the Lamborghini Super Trofeo North America will be shown on NBCSN throughout the season.

The IMSA Michelin Pilot Challenge broadcasts will be two hours in length while the other three will be one-hour shows. One of the highlights of the schedule will be the broadcasts will be shown closer to the date of the race making it better for fans to relive all the action from these races.

“Our fans are passionate about these series and when we were looking for a new broadcast partner, we wanted to ensure they would be able to watch these races,” IMSA Vice President, Marketing David Pettit said. “The fact that these broadcasts will take place closer to the actual race date and that they are all on NBCSN is a win for all of our fans as they help us celebrate our 50th Anniversary season.”

The first of these 28 broadcasts will take place on Tuesday, January 15 when the IMSA Prototype Challenge race from Daytona International Speedway will be shown on NBCSN at 5 p.m. EST.

Here’s the full broadcast schedule for each of the four series: 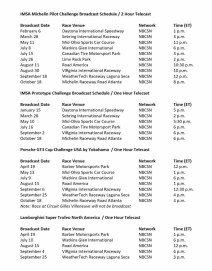