IMSA Wire Service
* Speeds continued to climb on the second day of the Roar Before the Rolex 24 At Daytona under Chamber of Commerce weather conditions in front of a huge crowd at Daytona International Speedway.

Jonathan Bomarito ended Saturday atop the IMSA WeatherTech SportsCar Championship time charts by the slimmest of margins, posting a best lap of 1 minute, 34.533 seconds in the No. 55 Mazda Team Joest RT24-P Daytona Prototype international (DPi). Bomarito’s time, which came under the bright lights of the 3.56-mile circuit Saturday night, was just one-thousandth of a second quicker than Renger van der Zande’s lap of 1:34.534 in the No. 10 Konica Minolta Cadillac DPi-V.R from the afternoon session.

Both laps were well under the current WeatherTech Championship track record of 1:36.083 set last year in Rolex 24 qualifying by van der Zande.

Nicolas Lapierre owns the fastest LMP2 lap of the Roar so far with a 1:36.553 in the No. 81 Dragonspeed ORECA. Richard Westbrook is the fastest in GT Le Mans (GTLM) with a lap of 1:43.148 in the No. 67 Ford Chip Ganassi Racing Ford GT and Trent Hindman tops GT Daytona (GTD) in the No. 86 Meyer Shank Racing Acura NSX GT3 at 1:45.533. All three laps took place in the Saturday afternoon session.

Sunday’s activities at the Roar include two more WeatherTech Championship practice sessions, as well as pit lane and garage qualifying for the DPi, LMP2 and GTLM classes. There also will be two IMSA Michelin Pilot Challenge practice sessions.

* The all-female No. 57 Meyer-Shank Racing Acura NSX GT3 team will have prime real estate to work with on Rolex 24 At Daytona weekend after Bia Figureido was the fastest qualifier in Saturday’s WeatherTech Championship qualifying session for GT Daytona (GTD) pit and garage allocations. Figureido, who was known as Ana Beatriz to U.S. fans when she raced IndyCar from 2010-13, posted a fastest time of 1:45.537 (121.430 mph).

She and the No. 57 car were second on the time charts at the end of the 15-minute session, but the session-leading No. 71 entry had all of its times disallowed as the Gold-rated Dominik Baumann drove the car during the session. IMSA rules require Silver- or Bronze-rated drivers only to participate in all GTD and LM2 qualifying sessions.

“I thought I was P2, but then with the disqualification, this is a very good position,” said Figureido, who will share the car in the Rolex 24 with Katherine Legge, Christina Nielsen and Simona De Silvestro. “It shows that we’re really competitive, so I’m really happy for everybody with our car.”

* Monster Energy NASCAR Cup Series 2004 champion Kurt Busch was an interested visitor to the Ford Chip Ganassi Racing pits at Daytona International Speedway on Saturday. Busch, who is joining Ganassi’s NASCAR Cup Series team in 2019, has raced twice in the Rolex 24 At Daytona.

He drove a Ford Multimatic Daytona Prototype along with fellow NASCAR drivers Matt Kenseth and Greg Biffle and sports car ace Scott Maxwell in 2006, then drove a Pontiac Riley DP for Penske-Taylor Racing in the 2008 race, finishing third alongside co-drivers Ryan Briscoe and Helio Castroneves.

“It’s been like a decade since I ran a prototype,” Busch said. “I live just down the road in Wellington, Florida during the offseason. I saw a practice on the schedule, I love seeing cars, tires and burning fuel, so I’m here checking it out with the Ganassi team.”

* With a bumpy freshman year in the rearview mirror, Winward Racing / HTP Motorsport is ready for its clean slate in 2019. Fielding two Mercedes-AMG GT4s in the IMSA Michelin Pilot Challenge, the driver lineups have altered a bit since the team’s last appearance in 2018.  Team Owner Bryce Ward is paired with Christian Hohenadel while Ward’s son Russell joins up with Dutchman Indy Dontje.

“I’m sure the whole team is looking forward to it,” said Russell Ward of the new year. “We’ve had some changes in the team and it’s exciting to be back here with the fresh start because it was pretty rocky last year. Second year for the team and it’s only up from here.
“My dad is driving the other car and he did a couple races with Christian and they really got along well. He made the call he’d like to do a full season with him and Indy was left open and he’s obviously very quick, so I think we make a good pairing. We get along well.” 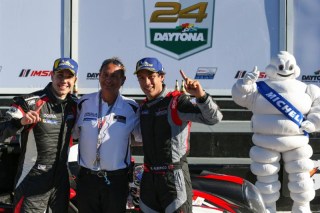 * As the first race of IMSA’s 50th Anniversary began, it was a tale of two races for the No. 4 ANSA Motorsports team in Saturday’s season-opening race for the IMSA Prototype Challenge at Daytona International Speedway. There was the start, when Brazilian Leo Lamelas had to navigate his Ligier JS P3 through a majority of the 19-car field after missing qualifying a day earlier due to an engine change and starting 16th. And then there was the finish, when Lamelas’ co-driver Neil Alberico – making his first career IMSA start – held off that same field of drivers from the lead on a restart with 34 minutes remaining to score the season-opening victory. It was the second consecutive Daytona win for ANSA Motorsports, with the team using great pit strategy and consistent driving from both Lamelas and Alberico to beat the No. 47 Forty7 Motorsports Norma M30 duo of Austin McCusker and Rodrigo Pflucker by 13.987 seconds ANSA Motorsports also won the inaugural IMSA Prototype Challenge race at Daytona one year ago with Roman DeAngelis scoring the victory. “It was my first race ever here in Daytona,” said Alberico, who previously raced in the open-wheel ladder system. “The IMSA series is awesome. It’s my first experience here and to be on the podium – let alone a win – is awesome with these ANSA Motorsports guys. Congrats to Leo, and hopefully there’s more to come.” “I’m so grateful to everyone,” said Lamelas, who won at Sebring last year with Charles Wicht Racing. “Our team did a perfect job. It’s very special for me too. I love Daytona, so I’m very happy to win here. Last year, my team, CWR, was an excellent team also. Today, I had the opportunity to go to ANSA. I’m just grateful for everyone who is making this possible for me. It’s a dream for me to be here racing in IMSA.” It was a strong points day for the runner-up Forty7 Motorsports team, who also had to start from the back after missing qualifying. The team and McCusker finished second in the LMP3 standings last season with two wins and two runner-up finishes in six starts. Pflucker was making his first start with the No. 47 team after driving the team’s No. 74 entry last season. “I was a little bit worried going into the race that points are so tight in this series that one bad finish can hurt you for the whole season,” said McCusker. “We’re in the championship hunt and that’s what we’re pushing for. Hopefully we can continue this at Sebring.” McCusker was running second on the final restart with 34 minutes left but had multiple lapped cars between himself and Alberico. He made a bold move into Turn 1 on the restart to get around the lapped cars, but ran wide and Alberico was able to pull away for the win. “I just got caught behind a lapped car and it was tough to get by him,” McCusker added. “I don’t know if I would’ve been able to catch Neil, but we did what we could and I am happy to finish in second after starting last.” The trio of Bruce Hamilton, Tonis Kasemets and Scott Maxwell rounded out the podium in the No. 60 Ligier JS P3 for Wulver Racing. Kasemets set the fastest lap of the race, lapping the 3.56-mile course in 1 minute, 44.021 seconds. Finishing eighth, but winning the inaugural Bronze Cup as the highest-running Bronze-only driver lineup was Jonatan Jorge, and his P1 Motorsports co-driver Joel Janco. “Starting and just focusing on the Bronze Cup, we had the pace I think to be on the podium overall,” said Jorge. “But still a good day for the Bronze Cup. We’re happy to be here and ready for the next one.” The IMSA Prototype Challenge returns to the track at Sebring International Raceway as part of the March 13-16 weekend that includes the Mobil 1 Twelve Hours of Sebring Presented by Advance Auto Parts. The television schedule for the IMSA Prototype Challenge was announced earlier Saturday. As part of IMSA’s new agreement with the NBC Sports Group, all IMSA Prototype Challenge races will be shown on NBCSN throughout the season beginning with the Daytona broadcast on Jan. 15 at 5 p.m. ET.
Powered by WordPress VIP