To explain how he controls a BMW M8 at speeds above 180 mph by using two hands and no foot pedals, Alex Zanardi cites another virtuoso with his hands.

Imagine Jimi Hendrix running through the chord progressions of “Purple Haze” or “Little Wing”, and you will have a decent idea of the dexterity needed to record elite-level laps around Daytona International Speedway by Zanardi, who lost his legs in a 2001 crash.

“I’m not that talented,” the Italian jokes when Hendrix is referenced. “But they are the type of exercises that remind me of what a guitarist has to do. To work independently with his finger over different chords and buttons.

“Not impossible” could be the mantra of Zanardi’s extraordinary life, which could be viewed as adding another remarkable chapter with this weekend’s Rolex 24 Hours at Daytona.

The veteran of CART ChampCar (where he won consecutive championships in 1997-98) and Formula One became a world-class athlete in other sports after the Sept. 15, 2001 wreck in Lausitz, Germany that ended the first phase of his auto racing career.

Competing in Paralympic handbike, Zanardi, 52, won gold medals at the 2012 London Games and won another gold at the 2016 Rio De Janeiro Games. He also finished the 2014 Ironman World Championships triathlon.

But he has returned to motorsports the past few years, and the Rolex 24 will be his most high-profile test yet.

After deciding to run the endurance race a little more than a year ago, Zanardi spent a few days with BMW engineers in Munich, Germany, to develop a setup that would optimize his driving and driver changes during the race with teammates John Edwards and Jesse Krohn.

Zanardi, who has been proactive in designing and developing implements to overcome the challenges of his lower body, brought ideas for his specially modified steering wheel. Within a month of the initial meeting, the setup was ready to be mounted and fitted.

“Everything basically felt right, so damn right,” he said. “I was very, very impressed by the amazing job they did in Munich in solving every concept I dedicated to develop this and transform all that into reality. Everything was installed.”

He has had a few warmups to test the equipment ahead of Daytona, including a DTM Championship race where he was “very competitive.” His endurance was measured in another two-day test at an Italian circuit.

“It was very demanding from a physical point of view,” Zanardi said. “They were concerned I wouldn’t survive more than half a day because that is a very physical car, very demanding car like an Indy car, and I basically wore the car out. They said, ‘We cannot stop, we don’t have any more mileage in the engine.’

“I did almost like 800 miles in two days. That was a lot, and I really enjoyed myself. I had a blast. I was a little sore but don’t tell them!”

Zanardi struggled while racing touring cars with prosthetic legs from 2005-09. Though they granted more freedom to move his hands over the wheel, he was uncomfortable with the bulkiness and weight of the prosthetics.

It wore him down too much during a 24-hour race in 2015 on the Spa circuit in Belgium, and the hand controls will allow him to stay much fresher at Daytona, where he will drive in stints that last three hours.

“I don’t feel any weaker over the distance of a single lap,” Zanardi said of the hand controls. “I can squeeze every ounce of performance from the race car. I proved that. On top of everything, the advantage I will have is indescribable. In the past, I wasn’t able to keep up with same the quantity of driving as teammates and wasn’t able to help as much as I wanted.

“To do a double stint in the middle of the night and then be completely trashed. I had to rest, and that was difficult. Here, I’m planning to shout, ‘Present!’ whenever they say we need you back in the car.”

Zanardi controls acceleration and shifting through buttons and levers and uses a trigger on the side for braking. It gets trickiest when the car is sliding.

“Mainly when you get sideways above a certain angle, and you have to play with the steering wheel more than you had planned approaching the turn,” he said. “The risk is that by turning the wheel too rapidly, you lose grip on the throttle mechanism. You use more oversteer because of the sharp reducement of power. You could generate more oversteer closing top too rapidly. When the car gets sideways a little, you countersteer and tease a little with the throttle.

He also can control fuel mapping in the engine while driving and shifting. “This is where I say I’m a little like Hendrix,” he said. “Sometimes I make small mistakes, but the good thing is that I’m safe. This is not dangerous neither for myself or other drivers. Maybe sometimes I’m a little late executing commands from the pit. Other than that, everything works best it can be.”

His teammates can attest it isn’t easy. Edwards tried driving with Zanardi’s steering wheel during a Daytona test and nearly looped it because he was unaccustomed to the brake bias.

“My heart rate took the rest of the end lap to come back down and be able to do a debrief,” Edwards said. “I didn’t know how I was going to explain it if I lost the car. Especially if I lost it and touched the wall because I was just trying to screw around with the hand brake.

“To be as quick in a race car having changed the whole way he drives is totally unbelievable. When that stuff isn’t second nature and you’re in the middle of your life, to retrain your body and get back to a similar level is something I don’t think many people can achieve.”

Krohn helped develop the hand controls in testing and said he was faster using his hands instead of the footbrake because Zanardi’s system is so efficient.

“What he can do on track and off track, he doesn’t have a disability,” Krohn said. “Just his mindset is driven to work with what he has. He’s been able to really drive on that.”

Edwards said the only challenge that might arise is if Zanardi’s detachable wheel gets stuck during a driver change (Edwards and Krohn wouldn’t have to rely on the hand controls, but the pedal functionality could be more difficult).

Swift driver changes have gone well in practice. Zanardi, who shares a seat insert with Krohn, is able to swap out his ride in 14 seconds, which is about half the original time.

“It looks like a dance; quite artistical,” Zanardi joked about the change, which he can do much quicker without prosthetics. “I’m actually faster than able-bodied drivers are to get in and out of the car, which compensates a little bit for the extra time we waste in changing the steering wheel.”

Though his goal is “to leave the circuit with a smile on my face,” Zanardi, Krohn and Edwards all believe they have the car and talent to win their class.

Such an achievement would be regarded as sublimely as any riff that Hendrix ever dreamed, but it would just be another brilliant piece for Zanardi in the daily demands of songwriting his unique life.

“These days, every day, I have to adapt,” he said. “It’s my life. Every time I come to a different step, different door, different obstacle, I have to figure a way to go around that problem.

“For sure, when you go through types of problems, you develop new instruments which may enable you to do things you didn’t think possible.” 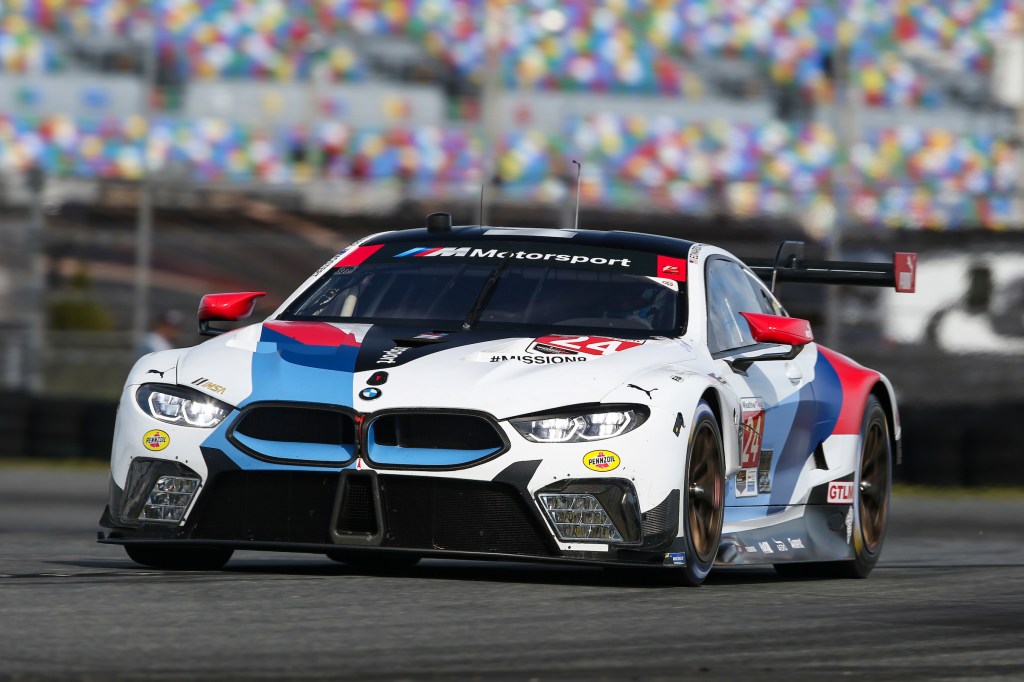