When it comes to why NHRA superstar Courtney Force announced Thursday that she was stepping away from drag racing, the speculation has moved into high gear.

Let’s dispel perhaps the most widely-held presumption by Force’s countless fans: she is NOT pregnant. NBC Sports has confirmed that with a John Force Racing spokesman.

And forget the idea of Courtney Force moving to another racing series.

Even though she has long been a fan of NASCAR and, of course, the sport husband Graham Rahal races in, IndyCar, Force has and always will be a drag racer at heart. She’s not going to jump to NASCAR or IndyCar and try to be the next Danica Patrick. It’s just not happening.

But beyond that, however, what is in Force’s future remains to be seen. And yes, there are other elements in play that will have many of those same fans still wondering: 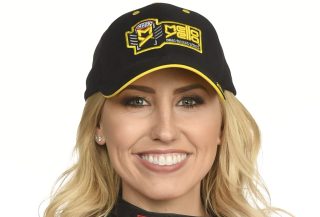 A) What happens to Courtney Force’s Funny Car? Can team patriarch, JFR owner and Courtney’s father, 16-time Funny Car champion John Force, find a replacement driver at this late stage of the game with engines ready to fire in just two weeks at the NHRA season-opening WinterNationals in Pomona, California?

B) Or will JFR at least temporarily scale back to only a two-Funny Car (John Force and Robert Hight) and one Top Fuel dragster (Brittany Force) operation for at least the outset of the season, and then perhaps bring in another driver to go back to a three-Funny Car program?

JFR is reportedly preparing an announcement that potentially could answer some, if not all of those questions, perhaps as early as tomorrow (Friday). There are plenty of rumors already circulating, and it’s likely the true story will ultimately emanate from one of those rumors.

Force’s departure is nothing short of a bombshell to the NHRA. She has been one of the sport’s biggest stars, essentially joining her father John as one of the biggest faces of NHRA. And even though she never won a Funny Car championship, there were plenty of signs that 2019 very possibly could have been her year to finally join her 16-time Funny Car champion father and sister Brittany (won the NHRA Top Fuel crown in 2017) as a NHRA champion.

The timing couldn’t have been worse for the NHRA. They’ve built so many promotions and TV commercials around John Force’s youngest daughter. And there’s absolutely no question that Courtney has drawn droves of fans to buy tickets to attend NHRA national event races in-person.

Now, with just two weeks until the first green “go” light flashes on a dragstrip to kick off the new racing season, she’s gone.

She likely will continue as a spokesman or endorsee for several of her sponsors, most notably Advance Auto Parts. That means Courtney will still be at most if not all 24 NHRA national events in 2019.

And, even though she said she is moving out of the driver’s seat, it would not be a total surprise to see her in a one-off ride that JFR would potentially field for the U.S. Nationals – the sport’s biggest race of every season – in early September. Maybe even Gainesville’s 50th annual Gatornationals in mid-March (although that seems like a longshot right now).

Other opportunities could include present themselves, as well. Much like how Dale Earnhardt Jr. joined NBC Sports as an analyst after his racing career ended, Force could become part of the Fox NHRA race broadcast crew. When you’re John Force’s daughter, as well as the winningest female driver in Funny Car history, you’re a walking, talking encyclopedia of drag racing. It would be great to see Force impart some of her insight in front of a camera.

Much like her older sister Ashley Force Hood and step-sister Adria, Courtney Force could also move into a management role on the operations side of John Force Racing, of which its Indianapolis shop is less than 10 miles away from where Courtney’s husband Graham Rahal toils on occasion, Indianapolis Motor Speedway. The couple also have a home in Indy.

While Courtney Force will no longer be hurtling down a dragstrip at 330-plus mph, she won’t be a stranger to the sport that made her rich and famous. And again, just like Dale Jr., while her role may change, she’ll likely remain as popular out of the car as she was in it – maybe even more so, and with a lot less of the risk of possible crashes or devastating motor explosions.

NHRA has seen many of its greats come and go over the years. Fans will adjust and start cheering for someone else. It’s human nature. But Force won’t be forgotten soon. Even her sister, Ashley Force Hood, is still fondly recalled by fans nearly nine years since she retired to start a family.

As for the NHRA, Courtney becomes the second big female star to leave the sport in less than two years. Another fan favorite, Alexis DeJoria, called it quits at the end of the 2017 season after one of the worst wrecks of her career.

While NHRA is losing one of its biggest stars, Courtney Force’s departure also will help pave the way for greater attention not only on Courtney’s older sister, Brittany, it will open the door for additional female stars to make their own name and path in the sport. As a sanctioning body and series, NHRA is far and away the most diverse and open to female racers, bar none.

Sure, calling it a career at an age when Courtney barely had scratched her prime and potential is disconcerting. And that Courtney has essentially retired long before her famous father, who turns 70 in May, will. One wonders if John ever will hang up his firesuit for a final time.

And let’s not forget that Brittany will still be around in Top Fuel to carry on the Force racing name and legacy (although she’s last in line unless one of John’s grandkids eventually follow in his footsteps).

But at the same time, the sport is very lucky to have had Courtney Force around for as long as it did. Since she first started racing in a Funny Car in 2012, she brought so much attention to a sport and a racing series that otherwise might not have had such a level of attention. Yes, it’s only seven years, but it seems like she’s been around a lot longer

Now, it’s time for Force to pay attention to herself, her husband, her family and her life. While she will be missed in a race car, it’s better that we had her for as long as we did, rather than not to have had her at all.