It’s Pedregon’s home race track, having grown up in nearby Chino, about 20 minutes away. Formerly known as Pomona Raceway, it was where Cruz and brother (former NHRA champion and current FOX NHRA TV analyst) Tony first got their exposure to drag racing from their late father, Frank, and where they both cut their own quarter-mile teeth, so to speak.

Even though he now lives in suburban Indianapolis, Cruz Pedregon always looks forward to the two annual NHRA national events at Pomona: the season-opening Lucas Oil Winternationals and the season-ending Auto Club Finals.

Going back to the West Coast is a definite homecoming for the veteran drag racer, who is starting his 28th season in NHRA competition at this weekend’s season opener. He’s looking forward to catching up with family, maybe grab a Double-Double or two from In-n-Out Burgers, and potentially catch some rays and take a dip at the beach.

But most importantly, the man nicknamed “the Cruzer” wants to start the 2019 season with a win. It’s been a long time since he’s won at his home track – one win in the Winternationals (1995) and two wins in the Finals (2008 and 2012) – something he hopes to change this weekend.

“I’m very optimistic about this season,” Pedregon told NBC Sports. “We always feel optimistic at the start of the year. We have the holidays, come out refreshed, ready to go. But I’ve always felt like there was work to be done and things had to kind of fall in line.

“This year, I just have a good feeling and feel like making the moves that we’ve made as far as personnel-wise and shuffling, I guess the best way to say it is I trust me more than I trust other people.

“I’ve put the bar pretty high so our expectations are to go out and be right there in the middle of everything. Pomona is one of the legendary races. I love the sport, I feel good about it, I haven’t lost the edge or the desire or anything like that. I’m just more experienced and know more about what to do and what not to do. It would be big to start off right there at Pomona. We’re notorious slow starters but I hope to change that this year.”

There’s several reasons why Pedregon has a good feeling about this weekend:

* First, after two seasons of delegating motor tuning duties to others, Pedregon will once again tune his hot rod, in addition to his driving duties.

“For me, to go back to that role is exciting, it’s a challenge but I’m up for the challenge,” Pedregon said. “I’m kind of reinvigorated – not that I needed that before – but I felt like there’s a lot of knowledge in my brain being a sponge working with all the crew chiefs I have over the years. Will I be busy? Absolutely. Is it something I can manage? Sure. I welcome it.

“I have a good feel for what I have to do. … For me, it’s good, old-fashioned experience that plays an important role in being a tuner. You have to go off the seat of your pants quite a bit. It’s just got to be a feel, you have to know what to do, you have to study, you have to be dedicated and committed. I felt that guy is hard to find, so I looked in the mirror and I said I better use this resource.” 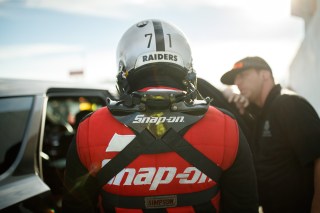 “It’s like a football team,” said Pedregon, who is a diehard Raiders fan and whose race helmet is similar to the Raiders’ football helmets. “Some head coaches call their own plays, others don’t. I guess you could say I’m going back to calling my own plays.

“For me, all that was left was to do was to put the emphasis to make sure I hired not one but two key guys that could oversee the operation. With Glen and Nick, I feel like we’re going to be as strong as ever.”

* Third, after 11 years running a Toyota body, Pedregon has switched to driving a Dodge Charger body for 2019.

“Toyota informed me middle of 2018 that the support was going away, so that left me kind of a free agent, so to speak,” he said. “I’m very happy to be with Dodge. It worked out very well that I was able to obtain Dodge bodies over the winter through my connection with Don Schumacher Racing. So, basically overnight, we went from Toyota to Dodge.

“Let’s face it, the engines in these cars are (Dodge) Hemis. Dodge goes way back in NHRA racing. Dodge is a racing group, a racing family and their hot rod cars that they come out with now, all the things they’re doing in the high-performance world, makes a guy like me want to be a part of that.”

GOING FORWARD AFTER A ROUGH 2018

Pedregon will be the first to admit last season was a rough one. He won one race (spring event at Charlotte) – his first victory in four seasons — but because of oil-down penalties at three other races due to major – and very expensive – motor explosions, he lost valuable championship points that ultimately cost him a spot to qualify in the top 10 for the six-race Countdown to the Championship playoffs.

“That was financially a big hit for us but we survived,” Pedregon said. “We’ve since addressed those issues, but that was definitely not the most fun part in any way, shape or form, particularly for the owner, who has to write checks to replace them.

“The thing that hurt most is we were in good position to make the top 10, however, with the point deduction based upon the NHRA rule where if they roll trucks to clean up your mess on-track, they actually deduct points. I had enough penalties or infractions that it bumped me out of the top 10, so that was a double whammy for me.

“If we would have made the top 10, we would have salvaged our season. … It was probably one of the most frustrating times of my career.” 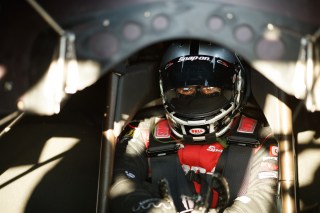 Pedregon has put the struggles his team has gone through the last few seasons in his rearview mirror. He’s perhaps as positive and optimistic as he’s been since he won his last Funny Car championship in 2008.

“I’ve set my goals pretty high,” he said. “I want to be top five in qualifying every race and I want to win five races this year. I’m throwing it out there, lofty goals.

“To me, it starts with goals and you have to do things that are consistent with those goals. I’ve made the financial investment on the right equipment and hopefully the right people.”

The 55-year-old Pedregon is hoping 55 is the new 35 for him. He’s ready to win a ton of races and a third championship. He’s far from climbing out of his race car or turning it over to anyone else. He knows he has a big job to turn things around, but he’s up for the task.

“I really want to perform at a high level and win,” he said. “I know I’m no spring chicken. I don’t know how many years I have left, so I’m not going to look back, I’m going to give it all I’ve got. I’m more motivated than I’ve ever been, so yeah, I’m very optimistic.

“Last year, there were too many chefs in our kitchen. This year, there’s going to be only one chef – and I make a heck of a steak.”