After one of the most dominating and successful seasons in NHRA history, one question remains about 2018 Top Fuel champion Steve Torrence: how much better can he become?

The Texas native, who has an affinity for wearing cowboy hats, is ready for his next rodeo – otherwise known as the 2019 NHRA Mello Yello Drag Racing Series, which kicks off this weekend with the season-opening Lucas Oil Winternationals at Auto Club Raceway in Pomona, California.

Having conquered both cancer and a heart attack in recent years, Torrence, who turns 36 in April, had one of the most impactful seasons in NHRA annals in 2018, winning nearly half of the races – 11 of 24.

Included in that outstanding performance was something the NHRA has never seen: Torrence won every one of the six Countdown to the Championship playoff races as he powered to the Top Fuel crown. 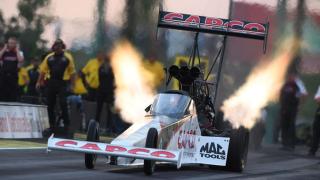 So what does Torrence do for an encore?

“We don’t have the same point to prove as last year, but it’s the same drive and maybe more, just for different reasons,” Torrence said in a media release. “The performance the last couple years speaks for itself, but we want to keep driving that home.

“We’ve gotten to the top, established the fact that we deserve to be there and we’re going to do everything we can to stay there. It’s business as usual for us (heading to Pomona) and that’s the way we’re going to approach it.”

Torrence, who won every time he reached the final round in 2018, ended the season with the championship-clinching win at Pomona, and now he kicks off the pursuit for a second title at the same location.

“I think we can maintain that focus,” Torrence said. “We had the same focus and drive we had in 2018 as we did in 2017 (finished second), we just channeled it and got used to working at a more intense level.

“We’ve been able to operate at such a high level for so many races, I think we’re accustomed to doing that. You see the way guys like Tony (eight-time champion Tony Schumacher) and Antron (three-time champ Antron Brown) operate and they’re used to being battle-ready. That’s how we want to be.”

Torrence’s performance in the last three seasons – 3 wins in 2016, 8 wins in 2017 and 11 triumphs in 2018, part of his overall 27 career Top Fuel wins – has vaulted him into conversations as one of the best drivers Top Fuel has seen in quite a while.

And given what Torrence and his 11,000-horsepower Capco Contractors dragster accomplished at last weekend’s annual NHRA preseason test in Chandler, Arizona – being the quickest car with a run of 3.689 seconds at 328.78 mph – it’s pretty clear he’s ready to pick up where he left off at the end of the 2018 campaign.

“To go do what we did at testing, that just bolsters our confidence,” Torrence said. “We’re looking forward to Pomona and we’re going to be real simple about it.

“The key is to go out and win rounds and if you’re able to do that four times, that’s a race. That’s how we’ve approached it the last two years and we’re going to keep that same approach.

“It’s humbling to be in the position we’re in and to think about the success we’ve had, but we’re not close to being done yet.”