Herbert was competing in the annual NHRA preseason test in suburban Phoenix in late January 2008 when his ex-wife, Sonnie, called. In tears, she told Herbert that their two sons, Jon and James, en route to McDonald’s for breakfast, had been involved in a traffic accident near their Cornelius, N.C. home.

The crash was so horrific that police would not allow Sonnie Herbert near the crash scene. She told Doug she’d call back once she got more information. Less than an hour later, as Doug Herbert was already traveling to the airport to fly back to Charlotte, his ex-wife called back with the devastating news: 17-year-old Jon and 12-year-old James had both been killed.

The police crash investigation said Jon, who was driving, was going 80 mph in a 45 mph zone when he lost control and slammed into an SUV. The boys were pronounced dead at the scene.

“I was devastated,” Herbert told NBC Sports. “Not only were they my sons, they were my best friends.”

Almost immediately after the funeral, Doug Herbert decided to forego much of the rest of his racing career, as well as divest himself of much of his performance auto parts business, and instead devote the rest of his life to honor his sons’ memory by forming B.R.A.K.E.S. (Be Responsible and Keep Everyone Safe), a non-profit organization dedicated to improve teen-aged drivers’ ability behind the wheel.

“I just tried to figure out how to deal with (his sons’ deaths) and one of the first things I learned is that car crashes are the No. 1 cause of fatalities for teenagers,” Herbert said. “Actually, in 2008, more teens died in car crashes than the next four things put together.

“It just really opened my eyes. If I had known that, I would have been doing more. I needed to do something about this. I made my mind up almost immediately that I was going to make sure Jon and James had a legacy that we were at least going to have some classes and teach their friends how to be safer and defensive drivers and learning about the dangers of being in a car crash and how to avoid car crashes.

“B.R.A.K.E.S. is good therapy for me, knowing that we’re making such a difference. It’s a pretty good feeling to have.”

B.R.A.K.E.S. is a four-hour program – one hour in a classroom and three hours behind the wheel of vehicles provided by Kia Motors – and intense indoctrination to safety measures over and above what the students might learn in school. Herbert refers to it as Advanced Driver Training.

Herbert – who wears a shirt with the photos of his sons emblazoned upon the back while teaching – also mandates that at least one parent accompany their teen to every class.

“As parents, we’re probably the most important part of our kids’ early driving careers,” Herbert said. “They’re driving our cars, we’re probably paying their insurance and we’re responsible for that.

“When you see your kid go down the street and see the taillights fade into the distance, you’re thinking, ‘I hope I did everything I could to make sure that my kid understands how serious this is.’”

Not surprisingly, parents get as much out of the class as their kids do – not to mention some even getting a break on car insurance once their kids complete the program.

“We get letters or emails at the office every day from teenagers or their parents that they learned something that saved their lives,” Herbert said. “We’ve saved lives and that’s so satisfying and makes me so proud to know I’ve been able to push this along and be connected to so many other great people who also want to make a difference.”

Each B.R.A.K.E.S. class begins with a shock to the attendees’ system: a video that tells the story of Herbert’s sons, including graphic photo footage of the accident scene, how it impacted Herbert and his former wife’s lives, as well as the life of their daughter, Jessie, now 20 years old.

To this day, Herbert still breaks into tears almost every time he watches the video. It’s readily clear that even now, 11 years later, his pain and grief are as fresh today as January 26, 2008, when his sons were taken from him.

Upon learning the devastating news, NASCAR Hall of Famer Bobby Allison and wife Judy who were among the first individuals to comfort Herbert and his ex-wife. The Allison’s also lost two sons: Clifford in a race car crash at Michigan International Speedway, and Davey, 11 months later, in a helicopter crash at Talladega Superspeedway.

“There’s not too many people that can understand losing two sons, but Bobby and Judy did,” Herbert said. “Bobby gave me such incredible advice that I think about every day. He told me, ‘Doug, I know how down you are. And if I could just change that in one second and take away all that pain and all that sadness, what do you think?’

“I said, ‘Of course, I’d do it.’ But, Bobby then said, “but the catch is you get no Jon, no James, they just never existed, you never got them.’ I said, ‘No, I wouldn’t do that because I have so many memories of such great times.’ He said, ‘That’s right. That’s what you need to focus on, how lucky you were to have 17 and 12 years of being their dad and all the good times you had because you can never take that away. You had one bad thing and millions of good things.’

“Sometimes it’s hard. Even Bobby will get choked up some times at what could have been or what should have been. But I was lucky and privileged to be the dad to two really great kids and I’m trying to make sure they are still making a big effect on others even now, 11 years after they’re gone.”

An NBC News video from several years ago illustrates the impact B.R.A.K.E.S. is making:

HOW B.R.A.K.E.S. HAS GROWN SINCE JON AND JAMES’ DEATHS

As he wrapped up his final full-time season of drag racing, Herbert also oversaw the training of 50 teenagers in B.R.A.K.E.S.’ first year in 2008.

“I was pretty excited about that and happy,” Herbert said. “I didn’t know where it was going to go from there. I had more parents call me when would I do more classes, so we did some more, and it just snowballed.” 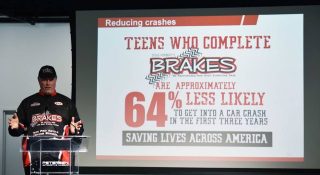 “I had a professor from UNC-Charlotte who put together a study and analyzed 5,000 of our students and compared them to standard Department of Transportation statistics and found that 64 percent (of students who completed the B.R.A.K.E.S. program) were less likely to be involved in a car crash,” the 51-year-old Herbert said. “If it was one percent, I’d be happy, but at 64 percent we’re saving lives and Jon’s and James’ lives are making a difference.”

In just the Charlotte area alone, over 4,000 students are on a waiting list to take B.R.A.K.E.S. training, which indeed can often be the difference between life and death, Herbert noted wistfully.

“Last year, on the Monday before a weekend class, we sent out an email on where to go and so forth,” Herbert recalled, his voice filling with emotion. “This mom emailed back and said they were looking so forward to coming and had been on wait list for three months and her daughter died a week before she was scheduled to take the class.

“She dropped a tire off the road, over-corrected and went across the road and rolled. That’s one of the exercises we do in a car. Talking to that family, that was just really, really difficult.”

Herbert’s efforts have been so embraced and so impactful in teaching young drivers and their parents that nearly two weeks ago, legendary 14-time NHRA Pro Stock Motorcycle champion Terry Vance donated $1 million to Herbert’s organization to further its mission and expand its reach even more.

What a moment! Terry Vance made a 1 MILLION dollar donation to @DougHerbert and @PutOnTheBRAKES! 👏 pic.twitter.com/2L2sT08aAl

B.R.A.K.E.S. is a family operation at heart. Not only is Herbert one of the lead instructors, daughter Jessie is a certified instructor as well, and Doug’s second wife, Mimi (daughter of Chip Ganassi Racing minority owner Felix Sabates), is also an integral part of the overall operation.

Longtime lead instructor Matt Riley also has a personal investment in B.R.A.K.E.S.: his mother was struck and killed in a crosswalk by a teenager who was driving and texting at the same time.

In addition, there are more than 300 trainers around the country that help B.R.A.K.E.S. put on as many as four classes across the country on any given weekend.

“Many other instructors have lost relatives due to what a teenaged driver did,” Mimi Herbert said. “When you come to B.R.A.K.E.S., it’s very apparent that everybody there is trying to help.”

As a promotional brochure states: “B.R.A.K.E.S. provides the foundational skills a new driver needs to make good decisions behind the wheel and reduce the risk of a crash. Courses include distracted driving awareness, panic braking, drop-wheel/off-road recovery, crash avoidance and car control/skid recovery – all of the biggest causes of crashes for new drivers. Other educational elements often include ‘Big Rig’ safety, first responder vehicle extrication demonstration, and what to do in the event of a traffic stop.”

Even with the impact B.R.A.K.E.S. has had upon young drivers, car crashes remain the No. 1 cause of death among teens. That’s why Herbert will never stop in his quest.

“My sons were my life,” he said. “I trained them to follow me into business. I had a race team and airplanes and a big house at the lake, a fast boat and all this stuff, and then I realized none of that mattered.

“I’m proud to have been Jon and James’ dad and I want to continue to make sure that their lives are able to make a difference and we can keep some parents from getting that same phone call that I received. I don’t want any other parent to get that call.”

For more information and/or to register for a B.R.A.K.E.S. class, visit www.putonthebrakes.org.