Don Schumacher has built the most successful organization in NHRA drag racing history, a seven-team behemoth that has earned 334 national event wins and 17 national championships in either Top Fuel or Funny Car.

Now, the man who is the figurehead for the organization but humbly likes to stay in the shadows while letting the success of his drivers and teams do his talking for him, will take his well-deserved place among the greatest names of motorsports.

Schumacher, 74, will be one of seven individuals inducted into the Motorsports Hall of Fame of America on Tuesday, March 12, at The Shores Resort in Daytona Beach Shores, Florida, just a quick burnout from Daytona International Speedway.

“It is a very humbling experience,” Schumacher said of his pending induction. “This is not something that I ever imagined being a part of.

“To be inducted into America’s Motorsports Hall of Fame with the Andretti’s and Foyt’s and Earnhardt and Garlits, and John Force and Jeff Gordon and on and on, these are the heroes of motorsports, and for my name to somehow be included in that is really a humbling, overwhelming experience for me.” 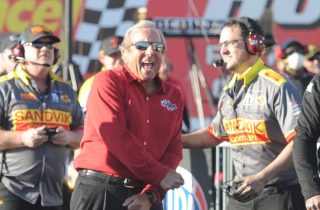 Schumacher was one of the most successful drag racers of his era in the 1960s and into the 1970s before stepping away from the sport to build a worldwide electronics company that employs over 2,000. He stayed away from drag racing for nearly a quarter-century before getting back into the game in 1998 with the formation of Don Schumacher Racing.

The next 20-plus years has been historic, including his own son, Tony Schumacher, becoming the most successful driver in Top Fuel racing history with eight championships and over 80 national event wins.

“It is really an honor to be able to represent NHRA Drag Racing in the Motorsports Hall of Fame of America,” Schumacher said. “It allows me to represent the sport that I love and have been involved in for decades.

“I respect the sport and what it has accomplished for America, but also for my family. It’s a very, very rewarding experience to be able to be out there and represent NHRA Drag Racing.”

Funny car driver and former NHRA champion Ron Capps, who has the second-longest tenure among all DSR drivers, calls his boss’s induction “fantastic.”

“Being able to work for him and drive for him since 2005, I can tell you that he attacks his team ownership like he did as a racer,” Capps said of Schumacher. “If you look back at his driving career in the late 1960s and early 70s, he was an innovator.

Schumacher will be presented for induction by one of his drivers, Funny Car pilot “Fast Jack” Beckman, who has the third-longest tenure with DSR behind Tony Schumacher and Capps.

“I was beyond honored for my boss, and one of the baddest drivers in the country the first year I attended a drag race, to ask me to induct him,” Beckman said of Schumacher. “Of all the high level friends and fellow racing legends that he could have asked, I’m really not sure why he picked me. My tux is packed, I’ll work on a short speech, and I can’t wait to bring Don up on stage to make it official!”

Don Schumacher secured Funny Car victory No. 150 as a team owner two weeks ago at Phoenix, Arizona, when Matt Hagan captured the win. Schumacher will be looking for another win or two in Top Fuel and Funny Car later in the same week as his induction with the Amalie Motor Oil Gatornationals in Gainesville, Florida, March 15-17.

“The key to success to accomplish this is the hard work of my teams on all aspects,” Schumacher said. “From the guys that change the oil to the guys that do the bottom end, to the crew chiefs, to the drivers, to my management team; the people at the machine shop and the fab shop in Brownsburg (Indiana), everybody plays a part and works so hard and does such a phenomenal job.

“The fact that we have accomplished this is beyond belief for me. I got into the sport of NHRA Drag Racing back in the early 1960s. I never imagined winning any event, no less 334 events and multiple championships. It’s an overwhelming accomplishment that my people have accomplished for me and I’m the one being honored (referring to the HOF induction), but I have to tip my hat to all of my Don Schumacher Racing and Don Schumacher Motorsports employees.”