That’s a little harder to explain to his legendary team owner, A.J. Foyt, whose death-defying exploits and longevity occasionally have made him seem a racing immortal.

“I said you know ‘AJ, I’m getting old,’ ” Kanaan said with a laugh during a new episode of the NASCAR on NBC Podcast. “He said, ‘What do you mean? I retired when I was 58.’

The 2013 Indianapolis 500 winner joined A.J. Foyt Racing in a multiyear deal that “I can assure you, this is my last contract in IndyCar. I’m loyal to AJ, and I will drive as long as he will provide me a car.”

Kanaan, who began racing in the CART series in 1998 and has been full time in IndyCar since moving over in 2003, just isn’t sure precisely how long that is, particularly after a solid run at last year’s Indianapolis 500, where he led 19 laps and was on track for a good finish before crashing with a flat tire.

“To be honest, I made a mistake in the past to try to put a number on (retirement),” Kanaan said. “Saying, ‘Oh, I have two more years, three more years, one more year.’ I’m in a very good place here. I have the motivation to do it. I’m pretty sure I’m still fast. I’m still extremely competitive at the Indy 500.

“When I make this team more successful, and we’re fighting for wins, that probably would be the time I said, ‘All right, my job is kind of done here, and I might go do something else.’ But if you asked me if I wanted to write the perfect end to my career in IndyCar, it’ll be at least this year and two more.” 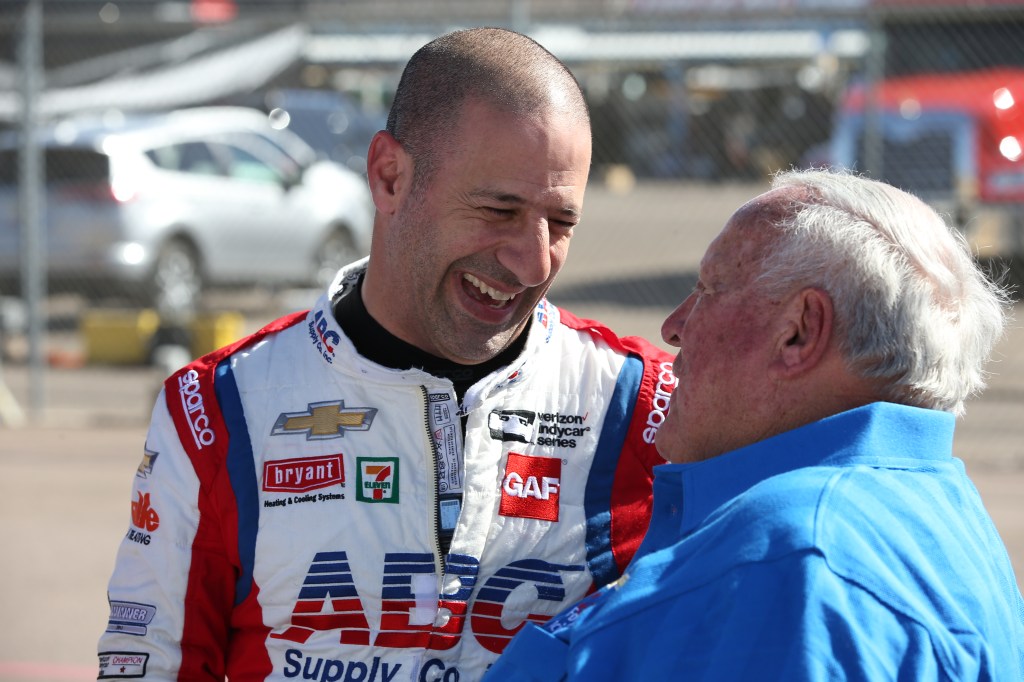 What’s next after that? Kanaan said he has talked with NBC Sports Group broadcasters Townsend Bell, Paul Tracy and Dale Earnhardt Jr. about what the transition from driving to the booth is like. He has dabbled in some on-air work as an analyst.

“I love the broadcasts,” Kanaan said. “People keep saying I do really well. I don’t know. It’s something that the more of my friends are doing it, like Dale, PT, Townsend Bell. I’m not saying I’m going to be as good as them, but the times I’ve participated, people kind of liked it, so that would be something I’d entertain.

“Or maybe even staying here and helping A.J. to manage this team. People ask me what about sports car? If it goes according to plan, I’ll be 47 by the time I quit this. I don’t know if I’m going to be driving something else. … So yes, I’d say perfect world, three more years. Maybe a couple more just doing the 500 and broadcasting is something that interests me a lot.”

Other topics discussed during the podcast by Kanaan, who finished 15th in Sunday’s season opener at St. Petersburg:

–What it’s like driving for A.J. Foyt and how their aggressive styles are similar;

–Some offseason personnel changes at A.J. Foyt Racing, which hired Scott Harner as the team’s vice president of operations after Harner worked with Kanaan at Chip Ganassi Racing;

–How his move to Indianapolis has gone to help with team management;

–The cyclical changes he has witnessed in the IndyCar Series over the past 20 years;

–When he might be driving a 7-11 throwback paint scheme to his 2004 championship and glory days.

You can listen to the podcast by clicking on the embed above or by listening via Apple Podcasts, Google Play, Stitcher and Spotify.