Cooper Webb’s remarkable run for the championship began in January with his first career win in the Triple Crown format of Anaheim II. That night, he won the first two Mains and safely managed his final feature to finish third. Round 13 of the Supercross season was much the same. Web finished 2-1-3 to sore the overall win.

“It was a tough night,” Webb said on NBCSN after winning the overall. “You always forget in the Triple Crowns how many laps you end up doing, so for me it was great to go out and get a win.”

It was the sixth win of the season for the rider who entered 2019 without a single 450 victory to his credit.

The evening was not without controversy as Webb manhandled teammate Marvin Musquin (5-3-1) in the first Main and put the Frenchman in a hole that his Main 3 win could not overcome. Off his rhythm, Musquin struggled with mistakes in the first two Mains before finally getting it right in the final feature.

Musquin was not happy with the way he was treated by his teammate. And even though Webb was able to increase his points lead by three, the rivalry is heating up. With four rounds remaining, if Musquin is able to continue to keep the pressure on, this will turn out to be a pivotal race because he knows where the battle lines have been drawn.

“Triple Crown is always super aggressive racing,” Musquin said reflecting on the contact in Main 1. “It’s only 12 minutes, so you’ve got to go for it. I was really aggressive. I made a clean pass on Cooper and I was pretty happy. Obviously I didn’t like the pass he made. He got really aggressive and was riding the bike super hard on multiple turns and he finally got me and pushed me off the track.

“It was pretty sketchy. … I guess that’s the way it is. I will have to do that if I have the opportunity or if I need to to make a pass.” 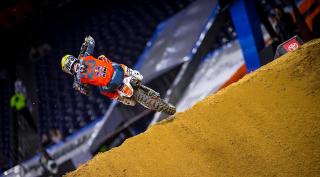 Dean Wilson (3-2-5) stood on the podium twice during the night to finish third overall.

It was not a points win, but Ken Roczen (1-21-8) scored got the checkers first for the first time in two years with his Main 1 victory. His previous best finish in the Triple Crown format this year was a second in Main 1 at Anaheim II. As has been the case so often this year, however, a strong run was followed by disappointment.

Roczen crashed hard in Main 2 and smashed his toe. He was unable to return to the second feature with a 21st-place finish, but gutted out the third Main and finished eighth in it. His disappointing Main 2 contributed to his overall finish of 10th.

In fifth, Cole Seeley scored his first top-five of the season.

Color commentary was provided by Ricky Stenhouse Jr., who made the flight over from Fort Worth where NASCAR is prepared to race Sunday at Texas Motor Speedway.


In 250s, Dylan Ferrandis made the most of his opportunity. As his principal rival in the 250 West championship stumbled, Ferrandis rode at the front of the pack throughout the three Mains to score the overall win. Ferrandis finished 2-1-2 in the Mains to beat second-place RJ Hampshire (3-2-4) by four points.

“I just did not give up but there was no risk to take for nothing, (so) I was just doing my race,” Ferrandis said on NBCSN after the conclusion of the third Main.

With the overall win, Ferrandis closes the gap to five points to Adam Cianciarulo (1-10-3), who finished fourth overall.

“Two wins in a row. I’m so happy. It’s a different feeling from last week because it was the first one. Now I’m really looking for the championship because it is the only thing that can give me full satisfaction.”

Cianciarulo took the blame for his modest performance.

“As much as I’d love to tell you … I had this guy crash in front of me – this guy cross jump in front of me, it really comes down to my fault because I didn’t get the start in the second Main. I put myself in a bad position,” Cianciarulo said after the race.

After winning the opening Main, the remainder of Cianciarulo’s night was marked by mistakes, but more importantly courage and ability. After going down twice in the second Main and falling to 19th, he mounted a charge that brought him to 10th at the checkers. In Main 2, he fell again and dropped to 13th early in the race. Cianciarulo made up another 10 positions and stood on the podium. With a 1-10-3, he finished fourth overall to minimize the damage.

“We have two races to make it happen and I couldn’t be more confident in myself,” Cianciarulo concluded.


450 Main 1: After grabbing the hole shot, Ken Roczen’s quest for his first win in two years got underway with the Main 1 victory. He stretched his advantage to 8.562 seconds over Cooper Webb and the rest of the field. … Dean Wilson rounded out the podium. … The drama came in the middle stage of the race when Webb body slammed his teammate Marvin Musquin off course after the wall jump as they battle for third. Musquin climbed through the field and was battling Wilson for third with a minute remaining, but was knocked off course and fell to fifth at the checkers. … Eli Tomac’s title hopes thinned with a sixth-place finish. – Complete Results

450 Main 2: Cooper Webb scored his fourth Triple Crown Main win. He won two Mains in Anaheim II and one at Detroit. … Dean Wilson finished 3.121 seconds behind in second. … Marvin Musquin had a bad start and was forced to overcome sixth-place on Lap 1. With time off the clock, Musquin cross-rutted and went down in the sand as he battled for every position possible. He fell one spot to third. … Justin Barcia went down with three minutes remaining. … Ken Roczen stepped off the bike in Turn 1 and smashed his toe. After winning the first Main, he was forced to retire from the second. – Complete Results

450 Main 3: Marvin Musquin wrestled the lead from holeshot winner Joey Savatgy in Turn 2 of Lap 1 and held his advantage till the end. … Main 3 was a battle of championship contenders as Eli Tomac finished second with Cooper Webb rounding out the podium. … With a smashed toe, Ken Roczen was able to finish only eighth. … Savatgy fell to ninth. – Complete Results

250 Main 1: Adam Cianciarulo grabbed the lead on Lap 1 and never looked back. He ran away with a nine-second advantage. … Dylan Ferrandis was eighth at the end of Lap 1. He steadily picked off the riders in front of him and passed for second as the white flag waved. … RJ Hampshire rounded out the top three. … Cameron McAdoo got the holeshot, but failed to navigate the first turn; he faded to ninth at the end. … James Decotis had a solid second-place run going until the four-minute remaining mark. At that point, he lost his rhythm and dropped to sixth. – Complete Results

250 Main 2: Last week’s winner at Seattle, Dylan Ferrandis snatched the lead from Chris Blose on Lap 2 and held on to win. … RJ Hampshire stayed within striking distance for much of the race, but finished 4.740 seconds behind. … Garrett Marchbanks rounded out the podium. … The championship battle came down to making the best of a bad situation. Adam Cianciarulo got pushed off line on the opening lap and fell to ninth. Mired in the field, his problems compounded when he crashed a second time on the blind side of the bridge. He was run into as he tried to remount. A clutch problem sent him to the mechanics area briefly. He rejoined the race 19th. Cianciarulo battled back to 10th at the checkers… Blose fell all the way to 19th at the end. – Complete Results

250 Main 3: Colt Nichols rode to an easy win over Dylan Ferrandis. … Adam Cianciarulo had another bad start and went down on Lap 1 in the whoops when he got tangled up with Michael Mosiman. He dropped to 13th. Cianciarulo put his head down and refused to panic, picking his way back to the bottom step of the podium. – Complete Results

Season passes can be purchased at NBC Sports Gold.