NHRA Top Fuel driver Leah Pritchett is used to pressure, having battled it since she began drag racing at eight years old in her native Southern California.

Rather than fearing pressure, Pritchett embraced it right from the start. From eight until 16 years old in NHRA’s Junior Dragster program, she took home 37 winner trophies.

These days, the 30-year-old Pritchett, who now lives in suburban Indianapolis, is one of the most popular racers in the National Hot Rod Association.

And she’s still scoffing at pressure, like the kind she and her 10,000-horsepower, 330-mph Don Schumacher Racing Top Fuel dragster will face in this weekend’s Mopar Express Lane NHRA SpringNationals Presented by Pennzoil at Houston Raceway Park in suburban Baytown, Texas.

That pressure will be elevated even more with the fact that she’s sponsored for this race by Pennzoil. She wants to win not only for herself and her team, but also for her sponsor. 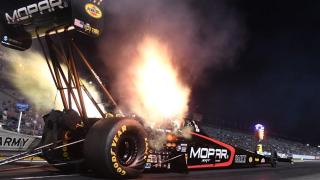 Pritchett, who finished fourth in the Top Fuel final standings last season with two wins, three runner-up and four other semifinal finishes in the 24-race national event tour, is off to a good start to the 2019 season.

In the first four races, she finished runner-up to Billy Torrence (father of defending Top Fuel champ Steve Torrence) at Phoenix in late February, lost in the quarterfinals in both the season opener at Pomona, California, and the 50th annual Gatornationals three weeks ago in Gainesville, Florida, as well as an early first-round exit this past Sunday in Las Vegas.

“So far this season we have already had some intense highs and lows comparable to a roller coaster, but what has stuck out the most to me is our team’s undeniable positive attitude to find a way to prevail,” Pritchett said in a media release. “It is contagious, inspiring, and that is why we will be heavy in the hunt for a championship come November.

“This year I am really trying to fine-tune how to be deadly on the (starting line) tree. My sole focus in Houston is to bring home the Wally gold (winner’s trophy) for our golden Pennzoil partners.

“I (can) already feel the excitement building, knowing that collectively this race is going to be a huge deal. The transformation of colors everywhere immediately created a sense of home turf.

“That’s a feeling few get to experience. Winning at a sponsor’s race undoubtedly brings an extra sense of gratitude and accomplishment, and is a rare, real-time, in-person opportunity for key partners to experience the highest of racing highs.”

Even with a home turf feel, Pritchett knows she has her work cut for her to not only reach the final round on Sunday, but also to claim the victory.

Among the top obstacles in her way: points leader Kalitta, as well as Brittany Force, who won the Top Fuel class in last year’s SpringNationals.

In addition, there have been three different winners and six overall different finalists in Top Fuel in each of the first three races.

But a very confident Pritchett is up for the task – and the pressure that comes with it.

“Embracing every moment is key,” Pritchett said. “If there’s one thing I can apply from our experience of winning at a sponsor’s race with a matching partnered car, it’s to morph any sense of extra pressure to perform, and mold it into high-energy excitement.”