LONG BEACH, California – The Acura Grand Prix of Long Beach will forever remain pivotal in the careers of Will Power and Helio Castroneves of Team Penske.

It was at this race 10 years ago that Power’s future with Penske was determined, although the Team 2014 NTT IndyCar Series champion and defending Indianapolis 500 winner had to be reminded of that.

For Castroneves, it’s the 10thAnniversary of one of the most important moments of his life.

It was April 18, 2009 when Castroneves was acquitted of all charges in a tax evasion trial in a United States Federal Court in Miami, Florida.

Instead of being led out of the courthouse in shackles, Castroneves was able to continue his racing career.

Power, who won the Champ Car Series finale in the 2008 Toyota Grand Prix of Long Beach for KV Racing Technology, was out of a ride after the 2008 IndyCar Series season. Less than one month into the offseason, Castroneves was indicted for tax evasion and tax fraud.

If convicted, Castroneves faced a prison sentence and deportation to Brazil.

Team owner Roger Penske stood by the driver, who at that time was a two-time Indianapolis 500 winner.

Castroneves would be unable to compete for Team Penske during the trial and Penske told him that he would get his IndyCar Series ride back if he was cleared of all charges.

Meantime, Penske needed a replacement driver that could drive for the team while Castroneves was having his trial. Power did not have a full-time deal with any team and believed a part-time ride with Team Penske would give him a chance to showcase his skill with one of the top teams in the series. 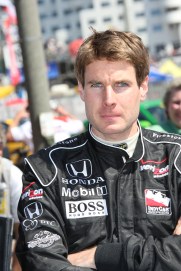 As the trial began, Power started sixth and finished sixth in the season-opening race at St. Petersburg, Florida on April 5, 2009. The next race was in Long Beach and as Castroneves’ trial entered its final phases, Team Penske was prepared for any and all outcomes.

The team brought an extra transporter to Long Beach, one that was painted black with no distinguishing sponsor logos. Inside was an extra Team Penske car with the No. 12.

If Castroneves was found guilty, Powers would remain in the No. 3 entry. Once he was acquitted, however, Power would step aside from the No. 3 and give it back to Castroneves.

At that point, Team Penske would bring out the extra car and prepare it as a “one-off” for Power.

It was about 11 a.m. Pacific Time on Friday of the race weekend that word began to circulate around the paddock that Castroneves had been cleared of all charges.

The emotional Castroneves sobbed openly in court, happy to be free to remain in the United States and continue his life as an IndyCar Series driver for Team Penske.

It proved to be a monumental moment in the careers for both drivers.

“Wow – the 10-year anniversary of Helio getting acquitted. That was my big shot,” Power told NBC Sports.com. “I had just finished the Friday practice first in practice and Tim Cindric (Team Penske president) and said to me in the pits, ‘The good news is you are P1. The bad news is Helio is on his way.’

“I was relegated to the back of the pit lane with a whole new crew, whole new car, felt good, went fast in practice on Saturday and won the pole.

“They had another car for me, and I felt like this was a big shot for me at this race.

“To qualify on the pole and finish second confirmed to Roger Penske, ‘Well, we probably should give him another chance.’” 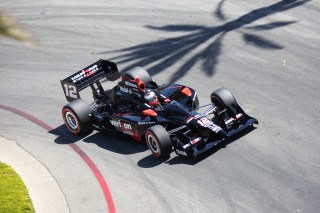 Power’s No. 12 was sponsored by Verizon, beginning a long sponsorship with the company that continues today. By winning the pole at Long Beach, he outqualified both of his teammates. Castroneves qualified eighth and finished with limited practice time on Saturday and none in the preseason. Ryan Briscoe qualified 10thand finished 13th.

“That definitely solidified my place on this team,” Power said. “I outqualified my teammates. That’s the first thing I needed to do to show Roger I could do at least as well as those guys. Also, he was giving me a chance in the Indianapolis 500 as well. So, I had two races to prove myself.”

Power focused on the job at hand. He finished fifth at the Indianapolis 500 that year. Team Penske added four more races to the schedule in 2009 and Power made the most of those with a third-place finish at Toronto and a dominant victory from the pole at Edmonton. He finished ninth at Kentucky but was involved in a crash in practice at Sonoma Raceway that left him with a broken back.

Power would recover and was rewarded with a full-time ride at Team Penske beginning in 2010.

Since that time, he has become one of the greats of his generation with 32 of his 34 career IndyCar wins coming with Team Penske after the 2009 Toyota Grand Prix of Long Beach. He won the 2014 NTT IndyCar Series championship and the 102ndIndianapolis 500 in 2018.

He is second all-time in IndyCar poles with 55. Mario Andretti is the leader in most poles with 67.

“The 2009 season was such a pivotal year for me and so important to execute in every race,” Power said. “It ended with a bit of an issue with me breaking my back, but I would recover and had shown Roger I was able to do the job.”

As for Castroneves, Penske already knew he could do the job. He is the only driver in Indianapolis 500 history to win the race in his first two attempts (2001 and 2002). He was already a big-name star in the series and was gaining fame outside of racing as the champion of ABC’s “Dancing with the Stars” in 2007.

When asked to reflect on the importance of that weekend in 2009, Castroneves smiled.

“Actually, my sister and attorney have called me this week and we are trying to have a reunion of the attorney’s this year at the Indianapolis 500,” Castroneves told NBC Sports.com. “It’s not something you want to talk about, but for sure it was a pivotal moment of my life that brought me back to racing and I’m happy to be here.

“It changed perspective of a lot of things and made me realize how much I love racing. With the victory at Indianapolis that same year, it showed that is what I was born to do. Hopefully, I can keep going as much as I can.”

It was five weeks after he was acquitted that Castroneves won his third Indianapolis 500 on May 24, 2009.

Instead of being incarcerated, Castroneves was in Victory Lane at the Indianapolis Motor Speedway. He has experienced the lowest valley in life to the greatest achievement of his career.

And it also played a vital role in the start of a career for Power, who has become one of the best drivers of his era.

“He wouldn’t have become who he is, so talk about destiny,” Castroneves said of Power. “Sometimes, you can’t plan. God has a plan and it worked for me; it’s worked for Will. It has worked the way it should be.”

Ten years ago, Castroneves remembers making that phone call to Penske to tell him he had been cleared. Penske told him to get ready, he was sending his private plane.

“The plane got to Miami about 6 p.m.,” Castroneves recalled. “I don’t even remember packing; I was just wanting to get out of Miami. We all jumped in RP’s (Penske’s) plane. It was surreal.”

The flight landed about 11 a.m. Castroneves could not sleep that night and he couldn’t wait to get to the track and be reunited with his team.

“I didn’t have much rest, but who cares? It was a new day for me,” Castroneves said. “And that’s how Verizon got started with this team. It changed a lot direction for a lot of people, including mine and Will.

“For that, Long Beach will have a special place in my heart.”

Verizon would go on to sponsor the IndyCar Series from 2014-2018. Castroneves has since moved over to IMSA to drive for Acura Team Penske but will return to the Indianapolis Motor Speedway for the IndyCar Grand Prix on May 11 and the 103rdIndianapolis 500 on May 24.

On Thursday, Power was inducted into the Grand Prix of Long Beach “Walk of Fame” as a two-time winner of this great event. He was given a dozen red roses along with a plaque similar to the one that will be displayed on Pine Avenue with all of the other racing greats.

Power walked up to Castroneves during a luncheon on Thursday and gave Castroneves the roses along with a hug.

Perhaps that was meant as a way to thank Castroneves and Team Penske for the strange and ironic way that day in 2009 meant for his career.