LONG BEACH, California – Thanks to the addition of rookies Felix Rosenqvist and Marcus Ericsson, interest in the NTT IndyCar Series is soaring in Sweden.

Rosenqvist calls it a “game breaker” in his homeland.

“When I signed with Chip Ganassi Racing, people were very happy that I was coming to IndyCar,” Rosenqvist told NBC Sports.com. “Many of my fans in Sweden were not happy with me being in Formula E. When I signed in IndyCar, all of the old Kenny Brack fans came back to life. When Marcus came to IndyCar, everything exploded and got three times bigger.

“It seems to be that IndyCar is what the fans in Sweden are following at the moment instead of Formula One.

“That’s a game-breaker for our country.”

Rosenqvist started his rookie season as the big story to come out of the Firestone Grand Prix of Long Beach when he started third, led 31 laps and finished fourth in the 110-lap contest. He was a leading contender at Circuit of the Americas on March 24 after qualifying fifth, but after he got punted in Turn 20 by Canada’s James Hinchcliffe, the 27-year-old from Malmo, Sweden finished 23rd.

Last week in the Honda Indy Grand Prix of Alabama at Barber Motorsports Park, Rosenqvist started 17thand raced his way up to 10th.

As the NTT IndyCar Series prepares for the second street race of the season in Sunday’s 45thAcura Grand Prix of Long Beach, he is hoping to give his fans in Sweden something to cheer about.

Watch Sunday’s race at 4:30 pm ET on NBCSN or the NBC Sports app

“I always look forward to these races, just to have this atmosphere,” Rosenqvist said. “It’s a special vibe for everyone to be at street races. I always tend to do well in them, and that helps.

“It’s a mixed feeling. I started off really well at St. Pete. COTA was amazing up to the race, when I had some issues. Barber was like a big joker the way everything happened. I want to work on my race pace. The qualifying pace seems to be there, and I want to improve my race pace.”

The top three drivers were in Hondas. 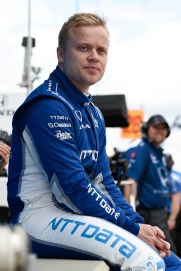 “I think he has been really strong in the races,” Rosenqvist said of Ericsson. “In all three races this year, he has been poor qualifying, but really strong races. I think it’s only a matter of time before he qualifies in the Top Five and has a run for the podium.

“I think his day will come. There are a lot of things to learn. Every week, they throw something different at you that is a surprise.”

Rosenqvist missed the setup in qualifying last week at Barber but plans on getting it right at Long Beach.

“It’s all things that we need to think about and work on for the future.”

The Acura Grand Prix of Long Beach has a rich heritage in Formula One and became part of the CART series in 1984 and IndyCar in 2008.

Even in Sweden, they know about this event.

“It’s perfect timing for me now to try to come back here now and try to get a podium.”

Plus, Rosenqvist’s mentor and agent, former Formula One and CART driver Stefan Johansson of Sweden, lives just up the freeway in Santa Monica, California.

It could all add up to another big weekend for Sweden in the NTT IndyCar Series at the 45thAcura Grand Prix of Long Beach.