INDIANAPOLIS – It was a frustrating day for two-time Formula One World Champion and 2019 Rolex 24 at Daytona winner in his return to the Indianapolis Motor Speedway as his time on the track was limited by rain and later, an electronics issue with his Chevrolet.

By contrast, it was a breeze for 19-year-old NTT IndyCar Series regular Colton Herta, who sailed through his Rookie Orientation Program (ROP) with ease and is cleared to compete in full practice for the Indianapolis 500 when practice begins on May 14.

There they were, the 37-year-old international racing superstar seating alongside the 19-year-old rookie who grew up in racing and has been around big-name race drivers his entire life. But when asked if it were, “pretty cool” to be seated next to Alonso, Herta spoke with the savvy of a veteran.

“It’s cool, but I don’t see it that way because I have to beat him,” Herta said to NBC Sports.com. “Maybe if I were at a grand prix weekend, I’d feel that way a bit more, but not on these weeks. 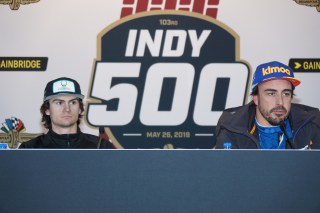 Alonso discovered how different his latest attempt at the Indy 500 was from his first effort in 2017. Two years ago, McLaren partnered with Andretti Autosport and had a solid car and team right off the trailer. That allowed the driver from Spain to quickly get up to speed, qualify fifth for the 101stIndianapolis 500 and ultimately lead 27 laps in the Indy 500 before his Honda engine blew up 21 laps from the checkered flag.

He finished 24thbut was determined to come back to Indy and attempt another run at the Indianapolis 500.

This year, however, it’s a full McLaren effort with Chevrolet. The car was built at McLaren’s racing facility in Woking, England. It has a technical alliance with Carlin, a full-time NTT IndyCar Series team, but the car and crew are all McLaren.

The test session was originally scheduled to begin at 11 a.m. and last until 6 p.m. Eastern Time. But rain halted the session about 11 minutes into the session and the track was shut down for the next four hours.

Once the rain subsided, the veterans were on track for 94 minutes. After that, Alonso and the other drivers that had to take a “refresher test” were allowed on track.

Just after Alonso drove his McLaren Chevrolet onto the track for its first lap, the engine died. That brought out yellow flag as the team tried to fix an electrical issue that prevented the car from running. He finally got on the track at 6:33 p.m. and ran until 7:18 p.m. when more rain fell on the track.

“It felt good to be back and again feel the magic of the place and this facility,” Alonso said. “To come in the morning and see the size of this place and the magic, it felt good. Unfortunately, the weather did not allow us to have the times we wanted for practice. There were not enough laps and time in the car to get a proper feeling.

“I guess it’s the same for everyone.”

Alonso believes even the limited amount of time that he had in the car that he had on Wednesday was better than no track time at all.

“It’s always important,” Alonso said. “The track time that you have, you might discover issues with the car and issues with a driver. This is a brand-new car.

“Today was a difficult day for the weather and for the time they gave to the rookies, but there is nothing we can do about it this time.”

Alonso comes from racing series, such as Formula One and World Endurance Championships, where the show goes on, even in the rain.

“It was frustrating for everyone,” Alonso told NBC Sports.com. “We lost a little bit of track time at the beginning, but that was expected because it was a brand-new car, and everything was finished last week. We expected to run slowly, step-by-step, and that is what we did.

Alonso said it was an electronics issue that plagued his Chevrolet. 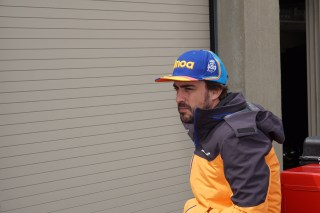 Other than that, he was happy to be back at the Indianapolis Motor Speedway.

“This place is great,” he said. “The event is going to be amazing. We were slow because of the weather and some of the decisions people make for running time, but we believe we can do well.

“It’s a bigger challenge, no doubt. We have to do everything ourselves as far as setup and operational side and strategy and tire management. All of these basic things were ready with Andretti and that saved a lot of time.

“It’s a bigger challenge, but it could be a bigger reward in the end. McLaren is making the decisions now and with Andretti, we just followed what we knew was working. It was easier, but now we can discover new things.