INDIANAPOLIS – As defending Indianapolis 500 winner Will Power was hitting the throttle of his No. 12 Verizon Chevrolet in Wednesday’s “Open Test” at the Indianapolis Motor Speedway for this year’s Indy 500, directly in front of him was a three-inch piece of titanium, just a few inches in front of the steering wheel.

“Anything they put to protect a driver’s head is a good thing,” Power said. “You notice it there, but you need to be at top speed, following cars to really know for sure.

“The ‘Halo’ they use in Formula One is much bigger and obviously higher. Believe me, you are going to want it there if a piece of debris hits that. It’s worth it, in that respect.”

All 29 cars on the track for Wednesday’s open test were equipped with the Advanced Frontal Protection (AFP), the latest safety advancement in cockpit safety.

The AFP will be used for the rest of the 2019 NTT IndyCar Series season, including the 103rdIndianapolis 500 on May 26.

Wednesday’s rain-interrupted session was the first time the AFP has been used on the track. The AFP is made of titanium by IndyCar chassis manufacturer, Dallara. That company introduced the AFP to INDYCAR in January as the series continues to test a protective windscreen that can withstand high impacts from debris.

The concept of the AFP began in 2012 and the current AFP has been subjected to, and passed, the same loads as the roll hoop.

Bolts included, the AFP weighs just 2.8 pounds and reinforcements to the monocoque weight 2.1 pounds. It costs $5,000 per AFP.

It’s the next step in safety, and to a driver such as Team Penske’s Power, it is very important. Power has been involved in several serious crashes during his career.

“It’s the luck of the game, man,” Power told NBC Sports.com. “When you have a car crash in front of you on a superspeedway, the amount of stuff that goes flying, man, it’s really the luck of the draw whether it hits you.

“The windscreen can’t come soon enough. INDYCAR is constantly working on ways to make it safer. You have to hand it to INDYCAR President Jay Frye, he gets after it in terms of safety and is really, really good.” 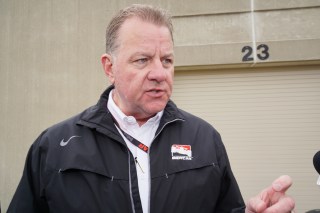 Frye gave an overview of the new device before Wednesday’s testing began at 11 a.m. Eastern Time. He said the AFP was considered after testing results of the windscreen did not meet INDYCAR’s wishes.

While that program continues to be developed, the AFP serves as another safety device to help the drivers and teams in debris situations.

“We’re worked really hard the last couple of years to come up with a solution,” Frye said. “This is Phase One of that solution. Phase Two will be announced sometime in May. This is the first piece of that process.

“This process began in 2012 and we resurrected it. We were confident of what this piece can do, so we were able to get it on the car now.”

The AFP is designed to deflect the flying debris over the head of a driver.

“We work on safety every day and this is the latest piece of that,” Frye said.

Five-time NTT IndyCar Series champion Scott Dixon tested the new device on a simulator to helped give the drivers an idea of how it affects the driver’s vision.

“After today, the drivers will get more used to it in their line of vision,” Frye said. “Scott said it didn’t bother him. This is narrower than the F1 Halo. By their second time out today, they won’t even notice it is there.

“Scott didn’t even notice it when we did the testing on the simulator. It was important we had him do this because we had him run the windscreen in Phoenix. We put some different devices in front of him and he thought it was fine.” 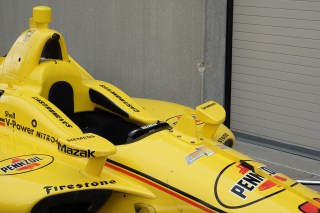 According to Tino Belli, INDYCAR Director of Aerodynamic Development, the height of the device was determined by simulator results.

As for the windscreen, Frye said a new evolution of that technology continues to be tested and he is pleased with the results so far. He hopes to give more information on that in May.

“We are doing this to help the drivers, so it’s a good thing,” Frye said. “The new piece we are working on for the next phase is for 2020. We feel good where we are at in that process.”

This device could have helped save James Hinchcliffe from a concussion when he was hit by a piece of the wing from Justin Wilson’s car in the IndyCar Grand Prix at the Indianapolis Motor Speedway in 2014.

“We think this would have helped that a lot,” Frye told NBC Sports.com. “That’s all we can do. It would have been a better outcome in that instance.”