Three-time NHRA Top Fuel champion Antron Brown is getting ready to do his best Spiderman imitation: he intends on casting out a web to lure opponents into a false sense of security in this weekend’s NGK Spark Plus NHRA Four-Wide Nationals.

Given that the host facility, zMAX Dragway in Concord, North Carolina, is a suburb of Charlotte, you might say Brown is throwing out a Charlotte’s web of sorts.

And for good reason: he’s the winningest Top Fuel driver at zMAX Dragway since the NHRA first began racing there a decade ago, with five triumphs – including victories in the 2014 and 2015 Four-Wide Nationals (also won non-four-wide races there in 2011, 2015 and 2016).

Even though he’s originally from New Jersey and now lives in suburban Indianapolis, it’s very clear Brown feels right at home in Charlotte. And given how he’s coming off his first final round appearance of the season two weeks ago at Houston, he’s ready to make it win No. 6 at zMAX. 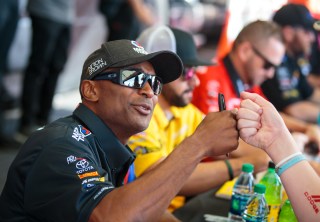 “Charlotte has always been a real special place for our Matco Tools Toyota team,” Brown told NBC Sports. “The city has such a rich race history from NASCAR to bringing NHRA there for one of our biggest races of the year in the Four-Wide Nationals.

“So every time you go to Charlotte, you always want to show out and stake your claim to a little bit of history in one of the meccas of racing. There’s no secret that you want to bring you’re A game.”

But the Don Schumacher Racing pilot isn’t living in the past notoriety of his five prior wins at Charlotte.

“You don’t really think about that: the focus is on winning the next Charlotte,” Brown said. “So going there into this year’s Four Wide nationals, our mindset is to go there heads down and pedal down, and, hopefully, at the end of the day, you’re sitting on the top of the mountain.

“We’ve had a lot of success there because we’ve had a mindset of one team, one mind and one focus to go there and compete at a high level.”

Not only must Brown forget about his past success at Charlotte, he also has to forget about the struggles he had last season. He won just once (Seattle), an uncharacteristic performance drop after having won at least four races or more in the previous seven seasons – including six or more wins in five of those seasons.

“We’ve been going through a lot of adversity and we’ve just been fighting through it as a unit together,” Brown said. “Last year was a learning year. We started the year off with just two people in the same positions they were in 2017 – (crew chief) Mark Oswald and myself. Everyone else was in a new position with new responsibilities.

“It was a growing experience for everyone on the team and all it takes is one thing to go wrong to end your day.“

He also finished an uncharacteristic sixth in the overall 2018 standings in the 24-race Mello Yello Drag Racing Series season.

“Yet, we were still competitive all year,” Brown said. “This year, everybody is in the same place and we’ve shown some real good speed at times, but we need to keep improving our consistency and, hopefully, get some good luck to go our way. We just want to keep building off of Houston.”

With his Houston runner-up finish, Brown feels strongly that he has turned the corner from last year’s struggles and is prepared to go on a tear. He has 50 career Top Fuel wins, good for fourth on the all-time Top Fuel wins list, just two victories behind third-ranked Joe Amato. Brown also earned 16 career NHRA wins in his previous stint racing a Pro Stock Motorcycle.

“Houston gave us some momentum, now we need to start where we left off there,” he said. “We just need to keep getting better. That’s the name of the game.

“It’s still early in the season and we want to keep improving the car. I’m proud of my boys. They were up late Saturday night in (Houston), where they rebuilt the whole clutch system. Now the car is doing the things we want it to do. We’re on the road to recovery and we’re going to keep pressing.

“The main thing is just making it to the finals. Once you get to the finals, it’s anybody’s game. There’s so much parity in Top Fuel right now. We have had five different winners in the first five races and there are at least five more teams out here who have proven they are capable of winning. We’re looking to get back into the winner’s circle soon and then we want to be able to go out and compete for our fourth championship.”