“I liked it a lot, it was great, a lot of fun, and we got along really well,” Power told NBC Sports.com at the Indianapolis Motor Speedway before Wednesday’s rain-abbreviated Indy 500 “Open Test.”

It was the first time Power got to know Earnhardt, though the two live just 7 miles apart from each other in the Lake Norman area north of Charlotte, North Carolina.

“We did an appearance for Chevrolet up in Detroit once, that had a bunch of drivers, but I never knew him other than shaking his hand at that appearance,” Power said. “It was cool to be on his show. I’ve watched Dale, and he is massively popular in the motorsports community. I was really honored that he asked me to be on his show.

“We talked about everything from driving an Indy car to fighting in Toowoomba (Power’s hometown in Australia) to karaoke machines to everything.” 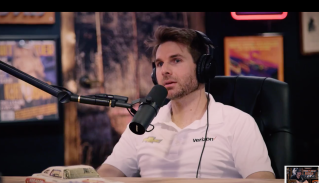 Power has his own unique personality that can often be described as “quirky.” Earnhardt, a former NASCAR star and two-time Daytona 500 winner, remains one of the most popular figures in NASCAR and is currently part of NBC Sports broadcast crew of NASCAR on NBC.

“He is very charismatic,” Power said. “I always thought when I saw him do commercials, that guy could be an actor as good as he is in front of the camera.”

In May, Earnhardt will get to attend the Indianapolis 500 for the first time in his life and will be part of NBC’s inaugural telecast of the Indy 500.

“Dale asked me a lot about the 500 and asked me what the first thing he should do when I get to the Speedway,” Power said. “I told him to stand on the pit wall near Turn 1 and see what it looks like. It’s a pretty cool experience.

“Dale told me he watched the Indy 500 since 1982. It’s pretty cool to have him commentating on it this year.”

Wednesday’s “Open Test” was the first time this year Power has returned to the track where he won the 102ndIndianapolis 500 in 2018.

“I drove into the Speedway today with a big smile on my face and very proud to have that banner of my win up there at the main entrance to the Speedway,” Power said. “I was super proud to win the race. But, you reset. You want to do it again. You understand what a great feeling it is, what an accomplishment it is to win this race and how special the place is.

“It’s such an amazing event with so much history. 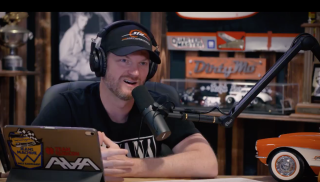 “I can’t wait to come out there and see where you stack up. It makes me more determined to win it again. There is no better place in the world than to win it here. I get goosebumps just thinking about it.”

Power and the 29 drivers who hit the track on Wednesday had to dodge several rain delays that limited track activity. That gave Power time to absorb the “Dale Jr. Download” podcast as the track was drying.

“I certainly enjoyed it and would enjoy doing it again,” Power said. “There was plenty of random thought about different things, and it’s not all about motorsports.

“He was shocked that we live so close to each other in North Carolina. Maybe we will go cycling now.”