Tuesday’s edition of the Dale Jr. Download may go down in history as one of the wildest, most raucous episodes ever.

What else would you expect when your guest is legendary drag racer John Force – who talks almost as fast as he drives.

The 16-time NHRA Funny Car champion, who is one win away from earning his 150th career national event victory, joined Dale Earnhardt Jr. and co-host Mike Davis on this week’s DJD. Catch the video portion of the telecast on today’s edition of NASCAR America from 5-6 p.m. ET.

They covered a number of topics, from gators to golf, to all of the crashes and fires Force has endured in his career, his racing family, and much more.

In fact, the ever-so-chatty Force had so much to talk about that this week’s DJD lasted over two hours.

Click here for the full Dale Jr. Download. But before that, here’s some of the top highlights:

Force on Dale Jr.’s new book, Racing to the Finish: My Story: “Hey, I read your (book). Unbelievable. I got an education. And you know what, I thought it’d be all about racing, but it really was all about the things that happen to race car drivers. And people don’t get it, but I got it. I’ve been doing this for 100 years, before you were born son. And I look at this and said, ‘Oh God, I never realized so many things.’ I called up my shrink and said I needed to be committed today. But I learned so much. If you get a chance, buy this book. I’m not trying to plug it (Dale Jr. said go right ahead). But it was great. I got it, took it. My daughter Courtney joked. We went to Tahiti … and it was painful for me. But I got up every day and started reading the book because I needed something to do. My daughters will tell you, I got hooked on it. I started underlining things so I could remember how things happened. It was just really cool. I never fell asleep reading your book. I spent a couple hours every day reading your book. It was really cool reading it and the education I got.”

Force on some of the songs that are played over drag strip public address systems when he brings his car to the starting line: “(They used to play) ’Jesus Take The Wheel’ and they used to play ‘Take This Job And Shove It’ and they played it at every race when I got ready to start my car. Now, they play, ‘I Don’t Want No Rockin’ Chair’ and half the fans in the stands say ‘I never heard these songs. Who is this guy?’”

Force turns 70 this Saturday. What keeps him going: “There’s reasons why I stay in this sport. We lost a young driver, Eric Medlen, and three months later, the cars had gone through a transition. We lost (Scott) Kalitta and a number of other drivers. … We’re warriors, but that ain’t the truth, that ain’t the way the world really works. … You start realizing things can go ugly here. You’re not Superman and you get through it. But I looked at Eric and I thought there must be a reason for me, why would the Good Lord take a beautiful kid like him and keep a guy like me. There must be a reason. When we lost your dad, it broke my heart. When you watched the funeral, you thought it was the president. In the middle of it, there must have been a reason for me to build safety, now I have chassis shops and motor programs in Indy.” 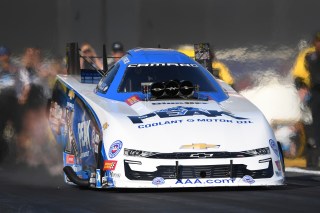 Who will fill Force’s shoes when he retires – that is, IF he ever retires: “I’m doing okay in the points, but the last couple years I’ve been struggling. I think they’ve all filled my shoes already. But I love these young kids and yeah, we have arguments and fights and things that go down, but they love what they do and they want to be the best. … Matt Hagan, (Jack) Beckman, (Ron) Capps naturally, the Pedregon brothers (Cruz and TV analyst Tony). … Next week, I’m going to be 100 in Atlanta. I’m embarrassed to say my age anymore. But I don’t know where to go, I’m just kind of lost out there. New stars are growing. (Steve) Torrence, the kid who won the championship (Top Fuel, last season), J.R. Todd. … They’re speaking out from the heart because you have to talk from the heart.”

When asked about whether he has any hobbies, Force went from golf to gators, both with near-disastrous results: “I don’t have a life. I go fishing with my grandsons and they say ‘you don’t know how to fish, do you? You don’t know nothin’ but a race car.’ tried golfing once. I was on the golf course. I hit the ball from the tee and it went to the right. Tiger Woods couldn’t have done that. It bounced off the golf cart. Wally Parks, founder of the NHRA, was sitting there and he didn’t see the ball and it just missed him. So they said, ‘you drive the beer cart.’ Me and my buddy drove the beer cart and drove it all day and we were so drunk.”

Now, as for the gators: “So we went swimming in a big old pond. A guy come by and said, ‘Hey, get out of there, there’s (water) moccasins in there.’ I almost got ate by a gator in Florida a couple weeks ago. If it’s a gator, it’s put there on a rail. … I was in a restaurant once in Florida with my brother, we looked out a window and saw a gator walking around across the back of the restaurant. So we went out there and a guy said, ‘Are you nuts?’ I said how could they just let a gator walk around there. They said, ‘you better be afraid.’ If I’m going to go down, if it ain’t in a race car, I want to tangle with a great white (shark).”

While there’s still plenty more to come in the podcast, we’ll leave you with one last Force comment that presents a strong visual: “And then I watched the ‘The Exorcist.’ Oh man, I got a real problem. I sat in my bedroom, hugging my teddy bear, waiting for the exorcist to come in.”

Once again, tune in to the TV version of the Dale Jr. Download today on NASCAR America on NBCSN from 5-6 p.m. ET., or hear the full interview with John Force by clicking here.