Indianapolis Motor Speedway officials revealed an initial entry list of 36 cars for the 103rd Running of the Indianapolis 500 (Sunday, May 26 on NBC).

2001, 2002 and 2009 winner Helio Castroneves, who moved to full-time IMSA competition in 2018, will once again return to the Brickyard. The Brazillian hopes to take his No. 3 Pennzoil Team Penske Chevrolet to what would be a record-tying fourth victory.

Two-time Formula One World Champion Fernando Alonso and McLaren are back as well, with Alonso driving the No. 66 entry. The Spaniard, who led 27 laps in his sole Indy 500 appearance in 2017, looks to complete his quest for auto racing’s “Triple Crown”, having won the Grand Prix of Monaco in 2006 and 2007, and the 24 Hours of Le Mans last year.

Other entries of interest include current IndyCar points leader Josef Newgarden, with Shell V-Power sponsorship on his No. 2 Team Penske Chevrolet, and Marco Andretti, who looks to finally end the “Andretti Curse” on the 50th anniversary of his grandfather Mario’s Indy win in 1969. Marco will sport a livery similar to Mario’s winning Brawner Hawk/Ford entry.

Two entries currently do not have announced drivers as of Wednesday’s announcement, with the No. 32 Juncos Racing and No. 77 Schmidt Peterson Motorsports teams to announce their respective drivers at a later date. 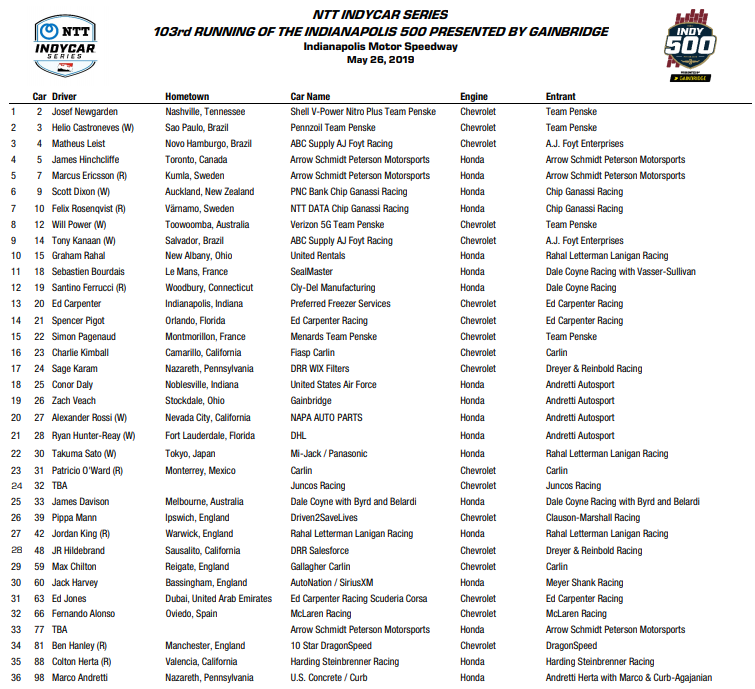