Ask the Team Penske driver a question about the future, and his eyes widen with a smile as he talks about the confidence level that has made him one of the stars in the NTT IndyCar Series.

But ask him to reflect on his winless streak that dates to the final race of the 2017 season, and the Frenchman will firmly say he doesn’t talk about the past. He looks only ahead for more success.

Although Pagenaud doesn’t like to talk about it, others that work with the 2016 NTT IndyCar Series champion have their own theories and reasons why the driver has not visited Victory Lane since Sonoma in 2017.

He is one of just two drivers that have won on the 2.439-mile, 14-turn road course. Pagenaud won the inaugural road course event at IMS in 2014 when he was driving for Schmidt-Peterson Motorsports. It was also a key victory in his 2016 IndyCar Series championship season at Team Penske.

Will Power of Team Penske is the only other driver to win the IndyCar GP. He has won it three times, including the past two seasons, and was fastest in the opening practice Friday.

How big would it be for Pagenaud to end his winless streak Saturday at Indianapolis Motor Speedway?

“It would be huge,” Kyle Moyer, Team Penske IndyCar general manager who also calls Pagenaud’s race strategy, told NBC Sports.com. “It would be absolutely huge for Simon to win any race right now.

“Last year was pretty much an ‘In the dumps’ kind of year. We had some problems and some unforced things that were not under our control. At the same time, you are expected to win at Team Penske. His teammates were winning. We didn’t win a race. We just came off two seasons finishing first and second in the championship and winning eight races.

“We didn’t even sniff it last year. We had two podiums and that was it, and that is really disappointing.”

Moyer and the rest of the team, however, see a faster, more competitive Pagenaud in 2019. Although his qualification performances do not reflect it, Pagenaud has been able to find speed to race from the back to respectable finishes at St. Petersburg (seventh), Barber Motorsports Park (ninth) and Long Beach (sixth).

“Having said that, coming into this year, the speed has been there for him and the whole team,” Moyer said. “He is getting more and more confidence every race. Long Beach and Barber were good races for him.

“If we got a win, that would get us over the hill, and that would make him a championship contender. He can do that. He can win three or four races in a row. I think if we can get the first one, that’s a possibility.”

Moyer believes last year’s car with the lower downforce took more time for Pagenaud to adapt to it compared to his teammates.

“Simon is a very intelligent driver and that is good in some ways and bad in other ways because sometimes, you just have to forget about it and drive the car,” Moyer explained. “I think we raced well last year. We passed more cars than anybody out there by a lot, but you want to get the qualifying right.

“There were some things that bothered him about the new car and to be honest, our cars weren’t very good at street courses. This year, our cars are much better. Simon is more comfortable, and he is driving it now more than the little things.”

It’s an important year for Pagenaud because it’s the final year of his contract with Team Penske. Moyer said that doesn’t matter because a driver is expected to win at Team Penske.

“He needs to get winning, contract or not. That’s what we are paid to do. That is what we are expected to do.

“Does he need to win?

For Pagenaud, he has time to turn around his fortunes at Team Penske and battle with the likes of his teammates, Will Power and Josef Newgarden as well as rivals Scott Dixon and Alexander Rossi.

There is no better place to turn around that season than the home of IndyCar, Indianapolis Motor Speedway.

The grand stage of racing would be a tremendous place to break out of the winless streak beginning with the IndyCar Grand Prix. The 103rdIndianapolis 500 on May 26 pays double points.

Pagenaud enters the month of May 11thin the standings, but is only 79 points behind the leader, Newgarden.

Ben Bretzman is Pagenaud’s longtime race engineer. He knows what a driver can do and believes he has much left to accomplish with the team.

“This year has been interesting because our pace has been there this year, Bretzman told NBC Sports.com. “Simon is much happier this year, but two of the first four races we have had to start from the back, which hasn’t been good.

“Once we get a win, it will take off from there. We’ll feel a lot better about things.”

Bretzman sees Pagenaud’s confidence level continue to grow and he’s ready to break out. In a highly-competitive series, however, there is no margin for error.

“We have to get that next level of confidence for him and he will be set,” Bretzman said. 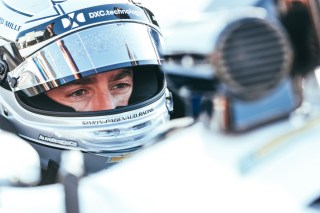 Pagenaud knows he is a good driver, especially on the Indianapolis Motor Speedway Road Course. He is fully aware that he hasn’t been winning races and is anxious to end that doubt with a decisive performance in Saturday’s race.

He is one of only two drivers that have ever experienced winning the IndyCar Grand Prix.

A third win could be vital.

“A win is always important,” Pagenaud told NBC Sports.com. “We are doing this to win races; not to be second or third. In our sport, we lose more often than we win. My biggest goal is to win the Indianapolis 500 and to win another championship.

“It’s a big month with a lot of points available. That is a big focus.

“We are very happy with the way the car handles now. We have been fast all year. At Long Beach, we were back in the game in terms of qualifying. Race pace is not a problem. From now on, the stars have to align, and we will be winning races soon.

“It’s about performance and now, it’s about executing. We have to execute before we can win races. It’s getting there quickly and I’m excited.”

“It was a big trophy, a big highlight, because it put me on the map in Indianapolis,” Pagenaud said. “It was a good win to have. It was a great race and a great weekend to have, especially with the team I was on that year with Sam Schmidt and Ric Peterson.

“In 2016 with Team Penske, I was involved with John Menard and he has become a great friend. It’s the best livery on the grid and it was important to give John Menard something special with his first IndyCar win at the Indianapolis Motor Speedway.”

Pagenaud would like to forget about the 2018 season, take his lessons and apply them to 2019.

“Last year, we didn’t have enough pace and this year we do,” Pagenaud said. “We didn’t hit the setup. There were two opportunities to win races and I took too many risks.

NBC Sports kicks off more than 100 hours of INDYCAR coverage in May this weekend with live coverage of the INDYCAR Grand Prix from Indianapolis Motor Speedway this Saturday at 3 p.m. ET on NBC, marking the first-ever NTT INDYCAR race to be broadcast on NBC.