INDIANAPOLIS – David Letterman packed his bags and left Indianapolis in 1975 to pursue his dream of becoming a stand-up comedian. But Indiana never left his heart, and his love affair with the Indianapolis 500 never diminished.

“Every time I come here, I get lost, I don’t recognize things, I know landmarks and I can find my way to the speedway,” Letterman told NBC Sports.com Friday at the Indianapolis Motor Speedway. “I know where Broad Ripple High School is. I know where Monument Circle is. I know where Long’s Doughnuts is off 16thStreet. I know where Shapiro’s Deli is and a few landmarks like that.

“Other than that, it could be Tucson. I don’t know.

“Burger Chef is gone, but is that really a loss? It’s more like a public service.”

Letterman’s career became part of television history. He was a regular “guest host” for Johnny Carson on NBC’s Tonight Show and in 1979 was given a morning talk show on NBC. Letterman’s show was short-lived for the time slot, but it was cutting edge and ahead of its time.

He would return to NBC in 1982 as the host of “Late Night with David Letterman” and his television career took off. He left NBC in 1993 but continued his talk show career on CBS until his retirement from television when he taped his final show on May 20, 2015.

The team won the 2004 Indianapolis 500 with Buddy Rice as the driver. 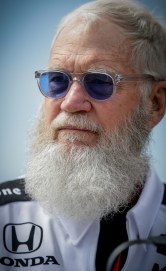 That victory has boosted Letterman’s confidence heading into Saturday’s INDYCAR Grand Prix and the 103rdIndianapolis 500 on May 26.

“I’m extremely confident about the team heading into the Month of May,” Letterman said. “The starting grid in Alabama was a delight for me and the results of that race was also a delight. People who know racing have told me there are things in place now that will translate to the two races here.

“I think we are going to have a strong month.”

Retirement has allowed Letterman to take a more active role in the NTT IndyCar Series team.

“Hanging out with Bobby is always fun,” Letterman said. “I’m going to be 100, so I’ve had a lot of Bobby time, and that is good. I’ve known Graham Rahal since he was a kid and getting to know Takuma Sato has been great fun.

“Being at Barber Motorsports Park and starting 1-2, you look one way and see the rest of the grid and look the other way and see the pace car. You think, ‘This is something that doesn’t happen much.’ I loved it and it reminds you of everything that is cool about this sport.”

Letterman’s favorite memories are when Bobby Rahal drove to victory in 1986 and when Rice won the 2004 Indianapolis 500 with Letterman watching Rice win.

“It was like somebody threw a switch and up in the pit stand was Scott Roembke, and it started to rain, and they threw the yellow and red flag out and Buddy was in the lead,” Letterman recalled. “I looked at Scott Roembke like this (thumbs in the air) and he was ‘No, no, no, no. There is still one lap to go.

“That was a lesson, not only for racing but for life.

“When the checkered flag fell, it was like a switch had been thrown. I was lit up like crazy. There was a group of people around me, nearly knowing me down and asking questions. There were two thoughts that went through me.

“One was uncontrollable joy of having won the Indianapolis 500. And the other was, ‘Well, I had nothing to do with this.’ But I loved it.

“It went on, and on and on. That was the standout memory.

“After experiencing that feeling, you want to win it every year.”

Letterman’s son, Harry, is a race fan, but there is no way he wants to see his son go into racing.

As far as the drivers on his own team, he has tremendous admiration for Sato, who won the 101st Indianapolis 500 for Andretti Autosport, and Graham Rahal.

“If you don’t think that is going to happen, you are making a huge mistake. Plus, the guy is pretty good on the equipment.

“But what else impresses me is the kid is so mature. He is so thoughtful, well-spoken and articulate. He has a big heart and is a gentleman. He is as good out of the car as he is in the car.” 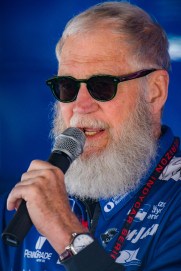 Letterman is excited about the future of the NTT IndyCar Series, including its new television contract with NBC.

“I think now we are in the start of something that is going to be great,” Letterman said. “At the start of this season and the end of last season, you had young guys you may not have known of coming from places you may not have heard of, and if this series was drying up, you wouldn’t have new blood desperate to get on the starting grid. You have younger guys pushing the older guys.

“The other thing is the media attention this year with the entire schedule on one network is incalculable. Now, we know where the races are and that is just great.”

In Letterman’s mind, it’s always a good day to be at the Indianapolis Motor Speedway. Sort of.

“Unless it’s 48 degrees, but I would agree with that in theory,” Letterman said. “How often would you like to see me? And where do you live?

“We’ll be here, and we’ll be here for the 500 so that is two more weeks at the Indianapolis Motor Speedway, so what more can you want?”