INDIANAPOLIS – In 1970, famed innovator and marketing genius Andy Granatelli wrote a book entitled, “They Call Me, Mr. 500.” He was the genius behind the famed STP Turbine and prior to that, the thunderous Novi engine. Granatelli was the winning car owner for Mario Andretti when he won his only Indianapolis 500 in 1969.

There are only two drivers who have won the 85-lap race on the 2.439-mile, 14-turn Indianapolis Motor Speedway Road Course. Simon Pagenaud won the inaugural IndyCar Grand Prix in 2014 for Schmidt Peterson Motorsports and again in 2016 with Team Penske. Power has won the IndyCar Grand Prix three times, including the past two years from the pole.

“I like it because of how smooth it is, and the style is very European. It’s a technical track where every complex rolls into the next. It’s right up my alley.”

Of his three wins in the IndyCar GP, Power said last year’s win was the most difficult because of fuel strategy. He had to save fuel while holding off a charging Scott Dixon.

“At that time, we were not getting very good fuel mileage, and I had to be very quick, hold off Scott Dixon and save a big, big number,” Power said. “I did both and was very exhausted after that race.

Starting on the pole in this particular race is important because the long front straight features a wide entrance to a tight, right-hand Turn 1. That turn becomes a funnel, and mayhem often ensues at the start of the IndyCar GP.

The pole winner can be ahead of the mayhem, and that can be the key to victory.

When it comes to keys to victory in the IndyCar GP, Power needs a very large key ring.

“You get those tracks that you just fall in love with since Day One,” Team Penske IndyCar general manager Kyle Moyer told NBCSports.com. “The second-best guy there is Simon Pagenaud, and they both drive for us.

“Everybody has a good track that they really love. Alexander Rossi has become the new ‘King of Long Beach’ where it used to be Al Unser, Jr. Will Power is the King of Indy GP. Scott Dixon was the King of Watkins Glen.

“It’s fallen where Will Power is the ‘King of the IndyCar Grand Prix.’ As long as it stays like that, he is comfortable there.”

There are many reasons why Power is so good at the Indianapolis Motor Speedway road course. When he arrived at Team Penske, first as a fill-in for Helio Castroneves during his tax evasion trial in 2009 and then as a full-time driver beginning in 2010, Power has been IndyCar’s “King of the Road.”

Twenty-eight of Power’s 35 career IndyCar wins have come on road and street circuits.

Of those road courses, the Indianapolis Motor Speedway Road Course is his best. 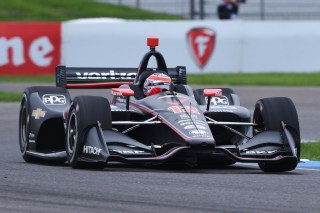 “He knows what he wants there typically, and it has worked for us in the past,” David Faustino, Power’s race engineer at Team Penske, told NBC Sports.com. “It is one of those tracks where he is certain where he thinks the car should be and the compromises that track holds. The fact it’s a short format weekend is good because he has usually been able to sort that out pretty quickly, especially last year with a new package.

“All of those things combined make it a track he has been successful at.”

With four wins in the five previous IndyCar GPs, combined with a record 17 wins in the Indianapolis 500, it’s fair to say that this is a “Penske track.”

“Last year as a team, we were pretty strong on the natural road courses, like Barber and the Indy Road Course,” Faustino said. “This year, it seems like everybody has caught up with us. The Honda teams have tested there, and the Chevy teams didn’t. It will be a lot more challenging this year.

“We need to keep our heads on straight and get there during qualifying.”

Because road courses are not as unpredictable as street courses, it’s harder to pass because drivers don’t make as many mistakes. That is one reason why on the natural terrain road courses, the driver who starts on the pole appears to have an advantage and can lead most of the laps.

“The car has a lower downforce level, so when you are in clean air, it’s easier to be fast and it is an equalizer in traffic,” Faustino explained. “The longer road courses, the leader doesn’t run into traffic as much. It is easier and that is what we hear on the longer tracks.

“The leader always has a target on their back, though. If you are the leader and have one or two guys that can hang on to you, you have a feeling you are not in as much control because the car behind you can save more fuel because they are sucked in hour two. You can’t make decisions based on who is behind you.”

In 2018, Power was both “Mr. IndyCar Grand Prix” and “Mr. Indy 500” as he became the first driver to win both races at the Indianapolis Motor Speedway in the same year.

“That was a great accomplishment, and it almost happened in 2015,” Power said. “I love superspeedways now. I love them, enjoy them and know what the car wants and feels. It’s a month I really look forward to.”

The only thing Power did not claim at the Indianapolis Motor Speedway last May was the pole for the Indy 500. That went to Ed Carpenter for the third time in his career.

Power started third and led 59 laps to win the Indy 500 for the first time in 11 starts.

“That was pretty amazing,” Faustino recalled. “It was a career highlight for him and for the whole team. We are going back there to do that again. It seems improbable, but we put the same effort into everything we do.

“If things pan out, it’s possible again. If Chevy brings the same power to the table, we can do it again.

Especially for Will Power.

“This month showcases what IndyCar is all about,” Power said. “It’s still very cool. I’m very glad this race is part of the ‘Month of May.’”