Shank was originally not convinced that was a good idea.

The team owner wanted to stick to a plan that he used last year by skipping the road course race at the Indianapolis Motor Speedway so the team could have a well-tuned, thoroughly prepared car for the 103rd Indianapolis 500. That way, the team could spend the first weekend at the Indianapolis Motor Speedway massaging the car rather than spending all day Monday, dramatically changing the car’s setup from road course configuration to oval.

Harvey was determined to convince Shank the IndyCar Grand Prix was a good idea.

“We chatted about it, and then we chatted about it again, and I could tell there was something that wasn’t selling very well,” Harvey told NBC Sports.com on Saturday. “I just said to him, ‘Trust me. I’m good at this track.’ It’s a track we come to and I believe I have enough talent to deliver the result that we have.

“It was trust on his part. I wasn’t trying to BS him. I was being honest with him, and I believed it. The result today showed it.”

Harvey lived up to his promise and finished third in Saturday’s INDYCAR Grand Prix, the highest finish of his NTT IndyCar Series career.

“Hopefully, next time when I say, ‘Hey, I can do that,’ he will know it then,” Harvey said. “Michael is as good a team boss as you can ever have.”

Shank stood in the rain in Victory Lane watching his driver celebrate on the podium. He is glad he listened to his driver and let him talk him into adding the race to this year’s expanded schedule.

“I’m really pleased, super proud of him,” Shank said. “The way he integrated with the crew chief, the engineers and Honda this weekend was literally perfect.

“He had never driven in the rain today. We literally dropped him in the fire and said, ‘Don’t mess this up.’ There’s a lot of joy and a lot of happiness right now.

“This is a step in the right direction. We are way ahead of schedule.

“Jack deserves a chance at this. He has worked his ass off; he is great with people, and he deserves this. If this race had been in the dry, we are second and could have maybe had more.” 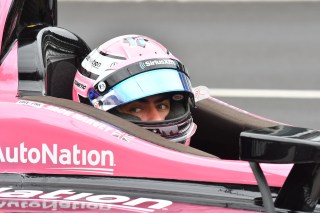 Harvey showed his promise and potential in Friday’s qualifications when he finished third. He was impressive in the race as weather played a major factor in track conditions.

In many ways, Harvey never turned a wheel wrong all weekend.

“To qualify third, to finish third I think was a result that if you’d have offered it to us before the weekend started, we would have taken it, and hopefully this is just that springboard for us, for first off of May,” Harvey said. “Hopefully it gives us some good momentum throughout the rest of this month, but also looking forward to the future, to the end of 2019 and looking forward to 2020.”

When Simon Pagenaud was charging to the front in the closing laps, a key moment in that winning drive came when he passed Harvey in Turn 1.

“There was a few laps where I thought we could hold him off, and then you talk about a bright car,” Harvey said. “Into Turn 1, I saw this ‘Yellow Dart’ suddenly just like arrive straight at the apex and thought, ‘Man, that was pretty brave,’ and thank God his car is so bright.’

“Clearly Simon had a very quick car today. We were racing together in the dry. We were racing together in the wet. He had a bit more pace than we did at the end there, and I thought his move was pretty good on Scott Dixon, too. I was a little bit behind it, but around the outside in Turn 8 and then on the inside through 9, it was a pretty stout day, and I think I heard Scott mention, you see how much it means to win just a race, because it’s so difficult all the time.

“I think we’ve been on the edge of a good result like this for a while, but actually trying to gel those pieces, put it all together have been tricky, so that’s why I think you have to enjoy every podium, every win that comes, especially in this place because I feel like the Indianapolis Motor Speedway is a racing driver’s ‘Neverland.’ It’s where we come to try and not get old.

“Did I think we could hold him off? Yeah, I certainly hoped we could, but in the end, we couldn’t quite.”

At the checkered flag, it was Pagenaud defeating Dixon by 2.0469 seconds with Harvey’s Honda in third.

The podium celebration is one that Harvey will always remember. 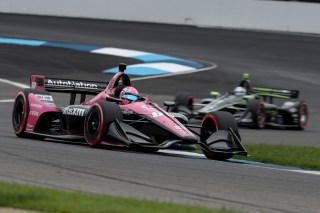 “To share the podium with both of those guys I think is pretty special,” Harvey said. “Our first podium in IndyCar today, and hopefully it’s the first of a few, and we’re just going to keep using it to keep learning, get more experience, and hopefully it won’t be as much of a shock when we get in here again.”

“I think it’s very important for the future of the sport,” Dixon told NBCSports.com. “Jack has done a fantastic job, I think, bringing different sponsors to the series, as well, and even his owner with Shank. He’s a great person, very successful in many other forms of racing, and it’s good to see them come over here.

“But it shows you the ability of any team with the parts and pieces that everybody has, you can come here and run strong, and if you’ve got a good driver, you can make it happen. I think that’s why we’re seeing such a big influx from Europe and great drivers that have come through the ranks here in America, too.