INDIANAPOLIS – When it comes to “Slicing and Dicing,” Alexander Rossi is the best thing since Ron Popeil’s “Veg-O-Matic.”

The NTT IndyCar Series star is fantastic when he starts up front, but he becomes “Captain Ridiculous” when he has to start midpack or lower.

At Phoenix in 2017, Rossi suffered a variety of issues but passed his way through the field twice. Rossi passed 53 cars in the race after an early drive-through penalty for hitting one of his crew members dropped him to last place.

In last year’s 102nd Indianapolis 500, Rossi’s car had a rear tire go flat on the final lap of his four-lap qualification attempt. Instead of challenging for a starting position of 10th or 12th, he had to start 32nd in the field.

In the race, Rossi put on an incredible show. While other drivers had difficulty passing cars on a hot and slick Indianapolis Motor Speedway, Rossi was able to make brave passes and finished fourth.

After failing to advance out of the first segment in Friday’s qualifications, Rossi’s No. 27 Honda started 17th in Saturday’s IndyCar Grand Prix at the IMS road course. Fans already were excited over the prospect of watching the talented driver from Northern California “slice and dice” his way through the field around the 2.439-mile, 14-turn circuit.

Alexander Rossi was going to put on a real show.

Instead, he was out of contention moments after the green flag waved. As the 24-car starting lineup raced down the frontstraight, rookie Patricio O’Ward ran into the back of Rossi’s Honda. The impact damaged the corner of Rossi’s car, and he had to head to the pit area for repairs.

“He just smoked the back of me,” Rossi told NBC Sports as he stood on pit wall after the race. “He got a drive-through penalty for it. Unfortunately, we had to replace the right-rear corner, so we were four laps down.

“A drive-through penalty doesn’t really bring me back anything.” 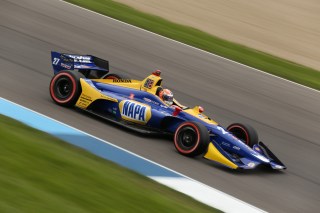 Despite the drive-through penalty, it put O’Ward on a different pit stop strategy than many of the other drivers in the field. That allowed him to race as high as second place at one point in the 85-lap contest.

“Considering where we started and a mishap on the start, we had made up a ton of ground,” O’Ward said after finishing 19th. “Regardless of how the race ended, I think we should be very pleased with how we ran and our overall pace.

“In the end, we just made a mistake.”

Rossi would return to the race and had a fast car but was too many laps down to be a factor. So, for the next 2 1/2 hours, Rossi had to ride around on his own lap. He finished the race 22nd, four laps down to the winner, Simon Pagenaud.

“It was difficult, because that is not what we are here for,” Rossi said. “You stay in it and hope guys will fall out, and you will be able to pick up positions through attrition, which wasn’t really the case today.

“But hey, we had a fast race car for the first time all weekend. It’s unfortunate it was a day late. If we had qualified better, we wouldn’t have gotten hit at the start, and it would have been a different day.”

Because he was out of contention so early but remained in the race, Rossi had to drive a different race than what he expected.

“I had to be very respectful of guys racing for position and let them go and do their thing,” Rossi said. “When we got clean air, we pushed, and we were in the top three or four most competitive cars on the track in the wet and dry.

“Hats off to the NAPA Auto Parts/Andretti boys for staying in it. You never know what can happen; it just didn’t come back to us today.”

It could have been worse for Rossi, however. His points situation was mitigated when NTT IndyCar Series leader Josef Newgarden finished 15th after leading the second-most laps (20).

Had Newgarden’s strategy of pitting out of sequence worked, Rossi could have lost a lot more points.

Beginning Tuesday, Rossi and Newgarden will be among the 36 drivers who begin practice for the 103rd Indianapolis 500 on May 26. That race pays double points, and Rossi can quickly erase Saturday’s disappointment.

“That’s it, it’s the big one,” Rossi said. “We’ve been fast every year in the 500. We need to put our heads down this past week, make sure we dial in the car and hopefully start better than 32nd come race day. We’ll go from there and hopefully have a chance to win it.

“We are already rebounded. Today is irrelevant. We will get back to work on Tuesday.” 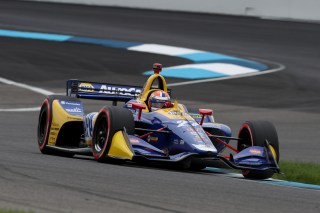 Rossi’s storyline was among the many that made Saturday’s first telecast of an NTT IndyCar Series race from the Indianapolis Motor Speedway on NBC a success.