INDIANAPOLIS – Fernando Alonso was forced to take it slow in order to pass his Indianapolis 500 “Refresher Test” before he was allowed to turn it loose on the Indianapolis Motor Speedway oval on Tuesday.

Alonso easily passed that final phase with 10 laps over 215 mph, but he never got a chance to turn it loose later in the day.

The two-time Formula One World Champion from Spain was prepared to develop a baseline setup on his car during Tuesday’s “Opening Day” practice session for the 103rd Indianapolis 500.

Instead, an electronic issue sent his McLaren Chevrolet back to the Gasoline Alley Garages.

He completed 50 laps around the 2.5-mile Indianapolis Motor Speedway oval but without full power from his engine, his best lap was 224.162 miles per hour. That was 32nd fastest out of 39 car/driver combinations that turned laps on Tuesday.

Compare that to the fastest speed of the day when defending Indy 500 winner Will Power went 229.745 mph in the No. 12 Verizon Chevrolet.

According to McLaren officials, Alonso was frustrated at the lack of track time on a beautiful day in Indianapolis.

The 39-year-old left the track without speaking to the media, but that was part of McLaren’s plan to “lay low” on Opening Day. 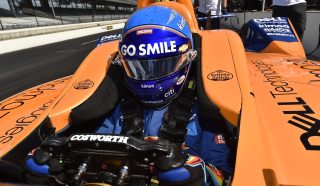 NBC Sports.com got an exclusive interview with McLaren team principal Gil de Ferran, who won the 2003 Indianapolis 500 when he was with Team Penske.

“I think the plan here was to run more than we did,” de Ferran said. “Obviously, I’m disappointed and a little frustrated we had the issue in the afternoon. We are trying our best to understand what the problem is. So far, it’s baffling. We lost the entire afternoon session.

“This morning was a bit of a warmup. He still needed to do a bit of a run to complete his refresher with a conservative setup on the car.

“Not running this afternoon really hurts us. Here in Indy, when the weather is good, you want to be out there, and today was a day of good weather.

“We have a lot of capable guys. We will get on top of this matter and see.”

De Ferran and McLaren had not determined the cause of the electrical issue Tuesday night as they continued to scour over reams and reams of data on their computers.

NBCSports.com was allowed into the team’s garage in Gasoline Alley as lead engineer Andy Brown continued to look for the cause of the issue.

“If we understood what the issue is, it would have been fixed,” de Ferran said. “That’s why it’s so baffling. It’s an electrical issue; not mechanical.

“It’s been a difficult start. No doubt about that. We’ll see what we can do.”

In 2017 when “Alonso Mania” swept through the “Month of May” as Alonso skipped the Grand Prix of Monaco to compete in the Indianapolis 500, he was a quick study. He got up to speed in a hurry, qualified fifth on the grid and led 27 laps in the race before his Honda engine blew up on Lap 180.

In 2017, McLaren partnered with Honda team Andretti Autosport, one of the top teams in the NTT IndyCar Series. Andretti provided Alonso with one of their top cars along with an outstanding collection of crew members and engineers who completely understood how to set up a competitive car for the 500-Mile Race. 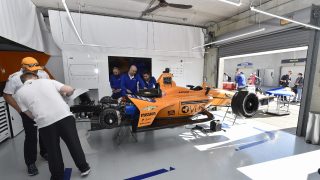 Unable to continue with Honda, McLaren is powered by Chevrolet and has an engineering alliance with Carlin Racing, one of the smaller teams in the Chevy camp.

“We are under no illusions how big a challenge we have,” de Ferran admitted. “We are racing against some really good teams. I’m under the opinion two heads think better than one. We have a lot of experienced people in the group, but we haven’t run together as a team ourselves everyone together before. Any help that we can get is better than no help.

“This is our crew. There are some really talented guys, but we have a lot of work ahead of us.

“I don’t think of those expectations. Even when I was a driver, I’d look at the situation I’m in, try to understand he weaknesses and opportunities we have and tackle them head-on. If you do that in a consistent basis every day and successfully, usually the results will come.”

As for Alonso’s response to a disappointed Opening Day, de Ferran said, “He is very aware we needed the running. It was not a happy moment for anyone on the team, including Fernando.”

Wednesday will be a new day for the teams at the Indianapolis Motor Speedway. It’s another seven hours of practice from 11 a.m. to 6 p.m. Eastern Time.

McLaren and Alonso know they have some time to make out after a lost day of practice on Tuesday.

“One step at a time,” de Ferran said. “Hopefully, we’ll get on top of some of the issues we have today and get a fresh start and clean run on Wednesday.

“We need to review what we are going to do now. We lost three hours this afternoon. We have to develop the setup. We haven’t discussed exactly how we want to do the day on Wednesday.”

McLaren CEO Zak Brown has said a full-time NTT IndyCar Series team in 2020 is dependent on how well the operation does at Indianapolis in May. It would be a two-car team and some drivers, such as Team Penske’s Simon Pagenaud, already have been considered as possibilities within the inner bubble of IndyCar.

When asked if he had an eye on future drivers for a full-time operation, de Ferran said it’s not his primary focus.

“Right now, I have my hands full,” de Ferran said. “Right now, our key focus is doing the best we can in the Indianapolis 500.”

There remains time for Alonso and McLaren to overcome Tuesday’s disappointment.

From Tuesday to Thursday of this week, IndyCar teams and drivers work on “Race Setup” with lots of full-tank runs and group runs to see how this car will work in traffic.

Teams start to trim for “qualifying setup” Friday because they are given extra boost. Teams work in reverse order to the month because they believe it is much more important to be ready for the race in case of rain. Speed setups can be handled in the “Fast Friday” and Saturday morning practice sessions.

“If the weather holds, we’ll have plenty of opportunity to recover from a day like today,” de Ferran said. 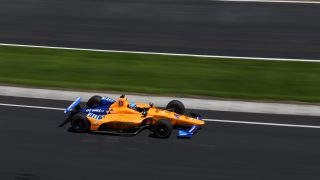 NBC, NBCSN and NBC Sports Gold’s “INDYCAR Pass” will combine to provide 13 hours of Indy 500 qualifying coverage, beginning Saturday, May 18, exclusively for “INDYCAR Pass” subscribers from 11 a.m. – 5 p.m. ET before shifting to NBCSN at 5 p.m. ET. The final qualifying session, which will determine which driver earns the pole position, airs Sunday, May 19, from 12-3 p.m. ET on NBC.

NBCSN and “INDYCAR Pass” will also combine to provide coverage of Indy 500 Carb Day, the IPL 500 Festival Parade, and the Indy 500 Victory Banquet.

The 103rd Running of the Indianapolis 500 presented by Gainbridge will be the first ever on NBC. Coverage begins on Sunday, May 26, with eight hours of programming: a pre-race show on NBCSN at 9 a.m. ET; race coverage at 11 a.m. ET on NBC; and a post-race show at 4 p.m. ET on NBCSN.