INDIANAPOLIS – If Fernando Alonso and McLaren thought they got off to a slow start in Tuesday’s “Opening Day” for the 103rdIndianapolis, then Wednesday’s second round of practice was downright miserable.

It was potentially devastating to his chances to have a competitive Indy 500 in 2019.

He lost control of his McLaren Chevrolet at 12:34 p.m. on Wednesday when it drifted high into Turn 2 and brushed the outside wall. It then rebounded across the track and slammed into the infield retaining wall.

“It was just pure understeer on the car,” Alonso explained. “Even if I lifted the throttle on the entry to the corner it was not enough. I lost completely the front aero. The wall came too close and too quickly. Unfortunately, it happened today, and we will lose a little bit of running time again. I’m sorry for the team.

McLaren took the damaged car back to its garage in Gasoline Alley to assess the damage. It was determined the primary car should be moved aside in favor of the backup car that was used at a recent test at Texas Motor Speedway.

McLaren IndyCar president Bob Fernley said both are McLaren-built cars, but the one that will hit the track on Thursday was built by McLaren at the Carlin Racing garages in Indianapolis.

The chassis that got damaged will be rebuilt and prepared as a spare car by Friday time, in time for this weekend’s qualifications at the Indianapolis Motor Speedway. 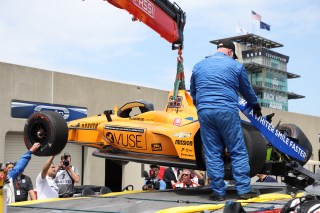 Fernley confirmed the issue that sidelined the team on Tuesday was an alternator problem. According to several crewmembers, there was some debris inside the alternator that kept it from functioning properly.

“Chevy will look into that,” Fernley said.

Two full days of practice have gone by, and McLaren has yet to have more than a few hours of running time. That has set the team back in terms of preparations for this weekend’s qualifications for the 103rdIndianapolis 500.

“You can never have enough laps,” Fernley said. “It’s not helpful in the process, but I think, unfortunately, it’s part of the Speedway program. I think we’ve reacted pretty quickly. The boys are doing a great job and we’ll be back out tomorrow.

“We definitely thought we were going to have a good run. And it was looking very good. Very steady, so it’s unfortunate.”

Unlike 2017 when McLaren formed an alliance with Andretti Autosport that gave the program a fully prepared Honda with crew and engineering support from Andretti’s IndyCar operation, this year is much different.

McLaren is attempting to create its own NTT IndyCar Series program. It is a Chevrolet operation because Honda officials in Japan prohibited Honda Performance Development (HPD) from doing business with McLaren after its Formula One team disparaged Honda’s F1 effort in 2017.

“I think this is an enormous challenge under any other circumstances,” Fernley said. “But it’s something McLaren has to do because what it’s done, it’s given them the foundation for the future.

“Working with Michael (Andretti) is fantastic, but you don’t learn anything. And that’s what you need to be able to do. In order for McLaren to take those next steps, they need the knowledge and foundation of what we’ve been doing the past few months.” 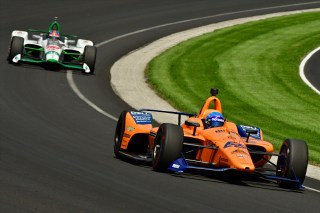 McLaren has an engineering agreement with Carlin Racing and can share data and other information, but the cars are built and prepared by McLaren.

“I don’t think we can rely on Carlin at all,” Fernley said. “They’ve got three cars to run. We have enough crew to do this ourselves.

“The Carlin part of it was mainly about logistics and helping us in the beginning, particularly with equipment. What we’ve had to do to set up a team, they did a year earlier. So, they were the nearest to what we’ve been having to do. So, they were very, very helpful.

“I think it’s slightly bigger challenge, not necessarily in terms of the organizational elements of it. The technology has moved on. All of which we expected, but all were a little more challenging than we thought it would be.”

Zak Brown, McLaren’s CEO, told NBC Sports.com in April that a full-time NTT IndyCar Series effort in 2020 depended on how well the team performed at the Indianapolis 500. If the team is able to overcome the obstacles it has been dealt in the first two days of practice, that might prove the mettle of this operation.

“I think what it will show, and I’m absolutely sure we will overcome the obstacles, is how good a little team we’ve built in a short period of time,” Brown said Wednesday. “The guys have worked incredibly hard to get it where it is today. And now they’re going to have to work very hard now to get us back on track again. 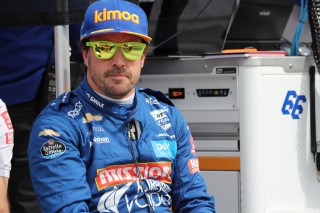 “A lot depends on how tomorrow goes. The annoying part for us is we’ve had two perfect days weather-wise, and we’ve lost a little in both those days. But it’s one of those things. You have to recover from it and get on with it. It shows the depth of the team to recover from something like this. Tomorrow we’ll brush ourselves down and start all over again.

“Every has to have one (that first hit at the Indianapolis Motor Speedway). We’re looking at it like that. It’s part of IndyCar. If it was easy, everyone would do it.”

Fernley has no doubt that once the backup car is repaired and Alonso returns to the race course on Thursday morning, he will be fully focused on getting up to speed.

“You never faze him,” Fernley said. “The beauty of it is he’ll dust himself down — of course there’s a little knock in confidence — but he’ll get a few laps under his belt and be back to normal.”