“My wife sensed his charisma years ago when his car broke in an F1 race and he sat down in a lawn chair to get some sun,” Johnson said. “My wife said, ‘Who is this guy?’ He’s really cool.”

And having someone of Alonso’s stature only helps elevate auto racing’s biggest event, which airs May 26 on NBC.

“I’m glad you are in the States and racing in the Indianapolis 500,” Johnson said to Alonso.

“I am excited, too,” Alonso said. “This race is very important, too. We hope to get a good result next Sunday.”

Both are legends and true racers; just with a different focus.

Alonso is the two-time Formula One champ. Johnson is a four-time Brickyard 400 winner. He has competed in the Cup race at Indianapolis Motor Speedway 17 times. But Thursday was the first time he ever attended an IndyCar event at the Speedway. The Indianapolis 500 is what Johnson watched growing up in El Cajon, Calif.

“It’s nice to finally be here and see these cars whip around here.”

After visiting with Alonso, Johnson talked to NBC Sports.com about his first trip to Indianapolis Motor Speedway during the month of May. NBC Sports.com got exclusive access, thanks to McLaren’s IndyCar program and Johnson’s representative, John Lewensten.

“It’s cool to be here,” Johnson said. “I’ve had this on my list for years but didn’t plan far enough in advance. I always kicked myself. I want to come back and see the start of the race, and I would love to do that this year. More important to me, I wanted to see some friends and hang out.

“I had an awesome experience with the McLaren guys when I did the car swap last year.

“I didn’t have anything else going on today so heck, why not?” 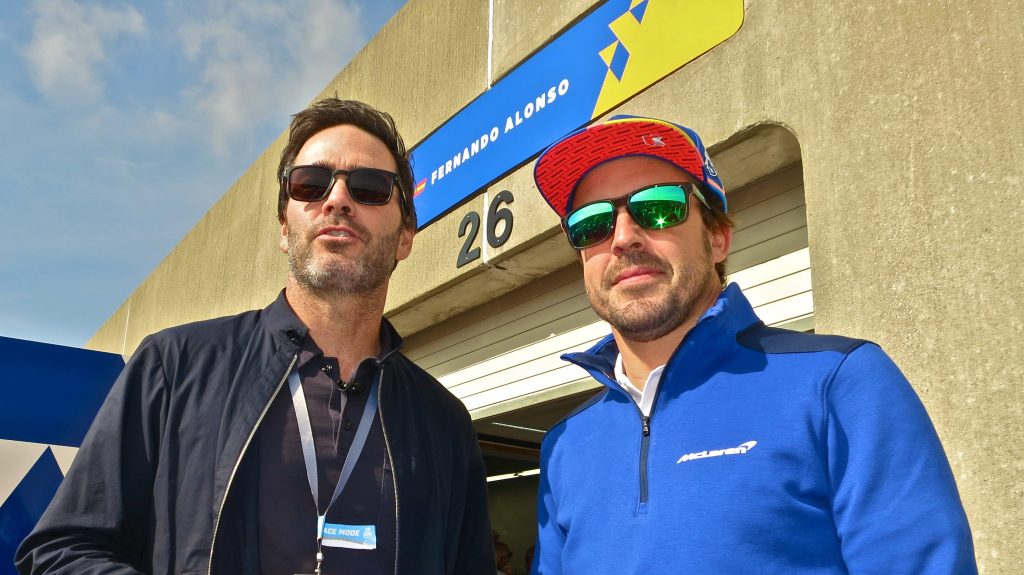 Alonso told Johnson, “You need to jump in this one,” pointing to the McLaren Chevrolet the team is trying to prepare for the Indy 500. “But your wife would not be happy.”

Last year, he told Motorsport.com that he had been approached several times about the Indy 500 and said that “I’m not overly excited about those fast ovals, but I think with my status and relationships I could put together some road course races in IndyCar.”

“I’ve run so many ovals, I want to do some road course racing,” Johnson told Alonso. “Especially, after feeling the braking and the downforce when I drove your McLaren at Bahrain last November.”

“You saw how little performance our cars have,” Johnson said, referring to the No. 48 Chevrolet.

There is a mutual respect that champions have for other champions, and that was evident between Johnson and Alonso.

“I’ve always had fun meeting people along the way and building friendships,” Johnson said. “I’ve done the Race of Champions. When these guys come to our races, I make sure to meet them and get to know these other guys.

“My phone is blowing up now that other people know that I’m here. I better go visit them.”

Johnson met Alonso for the first time during the 2018 Rolex 24 at Daytona, and that is when the idea for the car swap last November began.

Johnson has followed McLaren’s progress, or lack of progress, during the first two days of Indy 500 practice. An alternator issue limited the team’s track time in Tuesday’s Opening Day. On Wednesday, Alonso crashed in Turn 2 just 1 hour and 34 minutes into practice and never returned to the track.

According to McLaren officials, the backup car won’t be ready for practice on Thursday until after 1 p.m.

“Every team struggles here at some point or another,” Johnson said. “There is still a lot of time.”

Johnson admitted walking into the Indianapolis Motor Speedway in May gets him jacked up.

“You are not human or a racer if you don’t,” Johnson said. “A Cup car is awesome to see here, but one of these cars not lifting into Turn 1 is spectacular.

“The Indy 500 is definitely off the table for me.”

Chase Sexton won two of the three races in the Monster Energy Supercross Anaheim 2 Triple Crown, which was enough to overcome a fifth-place finish in Race 2 and give him the overall victory. It was the second Supercross win of his career.

“Super big night for me,” Sexton told NBC Sports’ Will Christien. “After last weekend with that being a struggle, I just need to come out here and stop the bleeding a little bit and I did that tonight.”

Sexton suffered a crash on Lap 1 of his heat, sending him into Last Chance Qualifier. The bad gate pick put him in a difficult position to start the race and he was able to climb to only fifth at the checkers.

At Anaheim 2, three riders entered the final race of the Triple Crown in a winner-take-all scenario. Sexton, Jason Anderson and Eli Tomac each had a shot at victory. It raised the intensity level for all riders in an evening that featured a lot of comers and goers.

Jason Anderson took the early lead in Race 3, which set him up for the overall victory. Sexton stalked and passed him midway through the race and then a minor mistake late allowed Webb to slip around as well. Anderson’s 5-1-3 gave him second overall.

“I had a tough couple of rounds, getting off that Anaheim 1 crash and then last week weekend I fumbled a little bit, but I’m excited to get back on the box and start moving forward,” Anderson told Jason Thomas.

Anderson finished seventh in the first two rounds of 2023.

Ken Roczen was the model of consistency in the opening rounds and at Anaheim 2. In three races so far this year, he’s gotten progressively better each time with a fifth in A1, a fourth last week in San Deigo and a third this week.

With results of 2-3-4, he earned his first podium of the season, which lands him fourth in the standings.

“This was hard earned,” Roczen said after the race. “I completely botched the start and then to have to work my way up. I only happen on the very last lap to step up here on the podium.”

Webb’s solid second-place finish in the third race allowed him to leapfrog several riders and finish fourth overall, but a seventh in Race 1 kept him off the podium. He improved in each race in Anaheim, however, with a 7-4-2.

With a 4-6-5, Dylan Ferrandis rounded out the top five.

The intensity of the race was a little too much for Tomac.

While battling side-by-side with Webb in Race 3 at the one-third mark, Tomac jumped wide and crashed hard. He fell to 14th, doing some damage to his bike in the process. He advanced only one position in that race to 13th. His first two races, a third and second, were strong enough to give him sixth overall. He retains the points lead, but it has shrunk to a gap of only four over Sexton and Webb.

Malcolm Stewart injured late in the week and was not able to mount.

Levi Kitchen became the first rider to unseat Jett Lawrence in the Triple Crown format at Anaheim 2 and won the overall with consistency. In his three races, Kitchen finished 4-2-2 to narrowly edge the winner of the first two races.

“This whole day; this is unbelievable. I took a few good slams in practice and I was down on myself,” Kitchen told NBC Sports Jason Thomas afterward. “The first moto I got a good start and got shuffled back, then I knew I just needed to be consistent.”

Jett Lawrence saved his best for last – which wasn’t hard given the struggles he experienced in the first two races.

Despite those problems, he entered Race 3 of the Triple Crown three points behind Kitchen after suffering a pair of disappointing races by his personal measuring stick. In the first and second 250 races of the night, Lawrence hit the ground. He dropped to the final rider in the running order in Race 2 with a Lap 1 fall. But in both races, he was able to overcome his mistake and close the gap so that he had a chance to take his first Triple Crown win of his career.

Lawrence rode to third in Race 1 and sixth in Race 2. In the final race of the night, Lawrence did all he could. He earned the holeshot, but when Kitchen fell in behind him, Lawrence’s fate was sealed. His 3-6-1 tied him in points with Stilez Robertson, but the tiebreaker goes to the final round and his win secured second-place.

“I can definitely say Triple Crowns are not my thing,” Lawrence told NBC Sports Will Christien. “We have one more to try and fix this, so hopefully we can get that done.”

Lawrence will move into the 450 class for the Lucas Oil Motocross outdoor season and his 250 record book will be closed.

The best news for Lawrence is the other riders who entered this round in the top three had a worse night, so Lawrence leaves Anaheim with a 16-point gap on Cameron McAdoo and 17 over RJ Hampshire.

Roberston finished 6-1-3 to take the final step of the podium.

“Getting that win in the second Main meant a lot,” Roberston told Thomas. “I wish I could have done a little better in the third one, but we’re still up here on the box.”

Mitchell Oldenburg used consistency to earn fourth in the overall. He finished 5-4-6.

After missing the Main last week in San Diego, Max Vohland finished 7-8-4 to round out the top five.

RJ Hampshire set himself up as the early favorite with his Race 1 win. In Race 2, it all fell apart. He fell in the sand section and damaged his bike, finishing last in that race. The final event of the night for the 250s provided only a 13th-place finish, leaving Hampshire deep in the points.

Cameron McAdoo hard crash in qualification, which was scary news for a team that has seen three of their riders sidelined with injury. McAdoo was never quite able to get his rhythm with an 8-7-5.