INDIANAPOLIS – Fernando Alonso could finally breathe a sigh of relief after running 77 laps in Indianapolis 500 practice on Friday.

Then, the two-time Formula One World Champion was asked if he were concerned that his “No Tow” speed of 226.869 miles per hour in the No. 66 McLaren Chevrolet, 30th in that category, had him concerned he might not make the field of 33 for the 103rd Running.

“I am,” Alonso admitted. “It’s the same for everyone. The order and when you draw the run are a factor. If it’s a hot day, that will matter because the track is hotter. Let’s see how it goes tomorrow, but nothing is guaranteed.

“As we saw in 2017, surprises can happen. Let’s hope tomorrow is a good surprise and not a bad surprise.”

A “No Tow” speed is a lap that is either 10-seconds ahead or 10-seconds behind the nearest car on the track, meaning the speed is not increased by the wake or draft of either car. That is a truer indication of the fastest speeds for a single lap around the 2.5-mile Indianapolis Motor Speedway.

An even better indicator are teams that area able to simulate a four-lap run without the benefit of a “Tow.” That is even harder to achieve with so many cars on track during “Fast Friday.”

Saturday’s qualifications begin at 11 a.m. and run through 5:50 p.m. ET. Positions 10-30 will be locked into the starting lineup for the race.

Saturday’s qualifications will also determine the “Fast Nine” that will battle for the Pole on Sunday and the cars in the “Last Row Shootout” on Sunday.

Ed Jones was the fastest driver on the “No Tow” list of 230.106 mph. His team owner and teammate, Ed Carpenter was next at 229.879 mph. Both drivers are in Chevrolets.

Conor Daly was the fastest driver of the day with a fast speed of 231.704 mph in the No. 25 Honda for Andretti Autosport. That knocked teammate Marco Andretti off the top of the charts after he put up a speed of 230.851 mph earlier in the day.

Both of those speeds came in traffic and had the benefit of a “tow.”

Alonso, the 2017 Indianapolis 500 Rookie of the Year and two-time Formula One World Champion, was able to have a full day of on-track activity for the first time since practice began on Tuesday. Since that time, Alonso’s Chevrolet was sidelined by alternator issues on Tuesday that sent him back to the Gasoline Alley garage. On Wednesday, he crashed his primary car into the Turn 2 wall just one hour and 34 minutes into the practice session.

The McLaren IndyCar team brought out its backup car and began to prepare that with a hope of returning for a full day of activity on Wednesday. That took much longer than expected, and then the team discovered an issue with the Chevrolet engine and had to make an unexpected engine change that was going to take overnight.

A severe storm washed out the remainder of practice around 4:30 p.m. on Thursday.

After three days, Alonso had about a third of a day of practice combined.

That is why his full day of action Friday was finally a good sign for the beleaguered team.

“It was a positive day for us, and we were able to put the car on track and try different directions on the setup and learn a little bit about the track and the day,” Alonso said. “Obviously, the (turbo) boost was up today, so the speeds were higher, and it was more a qually (qualifying) preparation than race setups.

“We had a lot of new tires from the last couple of days. So, we were able to do a lot of runs, and yeah, hopefully that information will give us tomorrow a little bit of confidence into qualifying.”

McLaren’s Sporting Director is 2003 Indianapolis 500 champion Gil de Ferran, who has had to navigate through a maddening array of obstacles just to get a car ready in time for the Indy 500. Unlike 2007, when McLaren was using an Andretti Autosport car with an Andretti crew and engineering staff, this year, it’s a full McLaren effort.

The inexperience at this form of racing has left the team scrambling this week.

“I think we’ve been going through everything together, the whole team,” De Ferran said. “We have a lot of guys with experience, but I think as a crew we’re very new together. Obviously, we have to step through things very calmly, very slowly in a very determined manner, and today was actually all about that.

“We had a nice clean day, as Fernando said. We had a lot of tires. We were working through changes in the setup and slowly trying to trim out the car towards the latter half of the day. I think in the situation we find ourselves, it’s important to stay calm and continue to improve the car little by little.”

Of all of the days of frustration and waiting, Alonso said the worst was Thursday. That is when he admitted a high degree of anxiety.

“Nothing we could do at that point, getting ready for today and having that extra time to check everything and to be ready. It was frustrating, but at the same time, as I said before, we saved a lot of tires that we were able to set up the car today maybe in a more — in a better way. And also, the track kept changing.

“Every day the temperature is completely different. Today, tomorrow, then Tuesday, Wednesday, things like that. Maybe things that you learn on Tuesday, Wednesday, they are not necessarily good for the race week. So, I think in a way, it was not too compromised, the performance of the car or how we felt. The more laps you do, better it is, so hopefully in the next couple of days we can run more.”

This is also a new car and aerodynamic package than the Dallara that the driver from Spain raced with at Indy in 2017.

“I think today didn’t feel too bad compared to 2017 Fast Friday,” Alonso said. “Qualifying, I think the cars are light in general, and the downforce you feel always low, with whatever package you put on the car. I think in traffic, what I heard is that it’s much more challenging now than 2017. As long as it’s the same for everyone, it makes a good show, and if the direction is this one, what INDYCAR is taking for the future and more horsepower or whatever, maybe you’ll see a better show.

“As long as you can follow somehow, which I think is quite important at the end of the day because you can remove the downforce, but you cannot follow closely, you miss the action and you miss the overtaking in the race. So, you need to be able to follow to a certain point to have a good show. Hopefully they take into account that.” 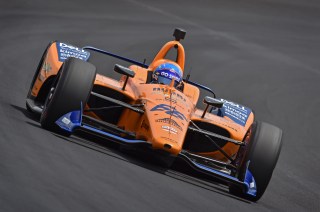 Back in the garage, for De Ferran and his team, the week of practice was turning into “Groundhog Day.”

“I think certainly yesterday, as you said, was a difficult day for everyone,” De Ferran admitted. “We’re a new crew. We respect this place a lot. So, we wanted to make sure that we put the car together the best way possible. Obviously that took longer than we expected, and I guess having been here before, I’m very aware — I was very aware of the importance of being out on the racetrack, both from Fernando’s perspective and for the development of the car.

“Even under those circumstances, I also know it’s very important to keep your cool, you know, so that you don’t make bad decisions going forward. Sometimes you can’t affect certain things, and you’ve got to make sure that you’ve got your game head on when things are ready to go. That’s what we tried to do last night. Obviously as Fernando said, it was frustrating for everyone, but today we’ll go back together.

“Fernando did a great job. The crew did a good job. We’re stepping through it and getting better together.”

The No. 60 ARX-06 won the 24-hour endurance classic at Daytona International Speedway by 4.190 seconds over Filipe Albuquerque of Wayne Taylor Racing with Andretti Autosport, giving Acura a sweep of the top two spots.

The Chip Ganassi Racing Cadillac V-LMDh cars took the next two spots with Renger van der Zande (the No. 01) and Earl Bamber (No. 02) as four of the nine new GTP cars finished on the lead lap within 12 seconds of each other and four more finished the race – quashing the prerace hand-wringing of mass failures for the highly technical cars in the debut of the hybrid prototype premier category.

“Amazed is the right word,” Honda Performance Development president David Salters said when asked about reliability. “These are sophisticated cars. It’s not easy. It’s a testament to each group that they did a really good job. It was a fight all the way through the race. I didn’t expect that at all.”

There were major problems for the manufacturer newcomers Porsche Penske Motorsport and BMW M Team RLL, whose two pairs of cars all finished at least a dozen laps down or more because of major mechanical problems in the IMSA WeatherTech SportsCar Championship season opener.

But there were no such failures for Acura despite the manufacturer skipping any endurance testing with the new LMDh car. Salters said his

It’s the third Rolex 24 at Daytona victory for co-owner Mike Shank, who won his first in 2012.

Just as he capped the 2022 season by winning the Petit Le Mans season finale in the No. 60 Acura to clinch the final championship of the DPi division for MSR, Blomqvist was behind the wheel again for his third overall victory in IMSA.

“That was crazy,” Blomqvist told NBC Sports’ Kevin Lee. “I knew we had a fantastic car. I’ve been working hard. Unbelievable. Massive, well done, everyone being part of this project and worked together on this project. What a car we’ve built.

“I was just a bit nervous. The 10 was definitely second fastest car, but we held them off.”

It was the second consecutive Rolex 24 victory for MSR’s trio of Blomqvist, Simon Pagenaud and Helio Castroneves, who were joined this year by Colin Braun (winning his first Rolex 24 overall).

Castroneves and Pagenaud are entering their second consecutive year as teammates for Meyer Shank Racing’s Dallara-Hondas in the NTT IndyCar Series.

“Can you believe that?” Castroneves told Lee. “Big props to everyone. Everyone did an amazing job. Everybody worked so hard together. We got it! Another one. I can’t believe it. This is absolutely a dream come true.”

The four-time Indy 500 winner led the team in his signature fence-climbing celebration afterward — just as he had when he finished MSR’s victory in last year’s Rolex 24 and when he won the 2021 Indy 500 for the team.

“It’s always fun to climb the fence with Helio,” said Pagenaud, who drove the second-to-last stint before Blomqvist closed it out: “The competition as amazing. It was tough out there. So much fun. Hope you had as much fun as we had. I’m going to savor this one.”

Winners in other classes were the No. 55 ORECA 07 of Proton Competition (which triumphed on a last-lap pass by James Allen on Ben Hanley), WeatherTech Racing’s No. 79 Mercedes in GTD Pro, Heart of Racing’s No. 27 Aston Martin in GTD and AWA’s No. 17 in LMP3.

A last-lap pass to WIN the @Rolex24Hours at @DAYTONA right at the finish line in LMP2! pic.twitter.com/Lk47HP0Hbn