INDIANAPOLIS – Two of the most traditional, time-honored and revered sporting events in America are hosted by adjoining states in the same month of the year. And both feature horsepower.

The Month of May kicks off with the Kentucky Derby at Churchill Downs in Louisville, Kentucky. This year was the 145thrunning of the famed horse race with a crowd of more than 150,000 watching the fabled event.

May ends with the Memorial Day Speed Classic, the Indianapolis 500 at Indianapolis Motor Speedway. The May 26 race will be the 103rd edition.

Both are national treasures that represent the pride of two great Midwestern states – Indiana and Kentucky.

Team Penske driver Josef Newgarden got the “Kentucky Derby Treatment” as a guest of NBC Sports when he attended “Derby Day” with his fiancé, Ashley Welch. The Indy 500 veteran was thrilled at the spectacle of 19 horses in the race for the roses.

On Sunday, May 26, more than 300,000 fans will watch Newgarden and 32 other drivers compete in the “Greatest Spectacle in Racing” featuring a combined 26,000 horsepower.

By attending the Kentucky Derby, Newgarden said it sparked his interest in horse racing. He won’t be able to watch NBC’s coverage of “The Preakness” on Saturday because he will be participating in qualifications for the Indy 500.

But he will be paying attention to what happens at Pimlico after his qualifications have concluded.

“I am interested but will be much more focused on Indy 500 qualifying, but I’ll definitely check out what happens after the fact,” Newgarden told NBC Sports.com. “My pick to win on Saturday is War of Will.

“It’s like coming to the Indianapolis Motor Speedway for the first time, when you go to the Derby, you start studying it more.”

By attending the Kentucky Derby as the guests of NBC Sports, Newgarden got to experience a great event for the first time. This will be his eighth Indianapolis 500 as a driver.

He is in a unique position to compare the two sporting events have each feature a slice of Americana.

“You feel the festivity of it, it has the same sort of vibe to it,” Newgarden told NBC Sports.com. “The way the stadiums are built, and the way people fill the infield and the stadium sections and seats. It looks like Indy, but just to a one-quarter or a half scale. To me, the whole vibe and atmosphere was very similar.

“I can see why the Kentucky Derby is such a special and historic event. Indy has that same charm. I hope people watching on NBC have that same sort of feeling.”

The fans who come to each event are big fans of the event, maybe more than for the sport. On Derby Day, 150,000 at Churchill Downs are big horse racing fans for that one day. The same can be said for the Indy 500.

“There are a lot of similarities,” Newgarden said. “There isn’t any live betting going on like you get at a horse track, but they have their books out, they see their stats and look at the drivers. At the Derby, they take look at the stats of the horses, try to understand the pedigree of the horses and their speed results.

“At Indy, they see the information on the drivers. People pull out their stopwatches.

“Horses and cars are quite different but very similar throughout the day.”

Fashion is also very important at both events in vastly different ways. 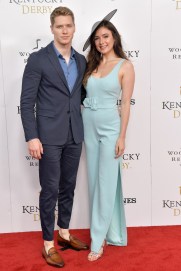 At the Kentucky Derby, it’s pastel-colored sport coats and fancy bow-ties for the men; springtime dresses with hats for the ladies. At the Indy 500, it’s checkerboard shirts, shorts and hats or American flag-themed apparel for both genders.

“You have styling on each front, but both are different at the same time.”

Newgarden and his fiancé were in the Stakes Room as guests of NBC on the top level of Churchill Downs.

“It was a very cool privilege to watch the race there,” Newgarden recalled. “I could see the infield and it’s like the ‘Snake Pit’ at the Indy 500. You don’t have the EDM artists or the fire going on during the race, but you could see people had been there and were having a great day. You could tell they were there for 24 or 48 hours prior.

Both have a very similar, distinctive feeling of being a truly, “Big Event.”

“I wanted to take the event in and take a closer look to it, but people are there because it’s a big deal, too,” Newgarden explained. “Both events are all about horsepower at the end of the day.”

Newgarden placed a $100 wager on Maximum Security and was ready to collect on the 9-to-2 odds. But for the first time in Derby history, an “objection” was requested about the finish. Race stewards determined Maximum Security had changed lanes and impeded other horses in the race.

The horse that crossed the line first and was believed to be the winner was disqualified.

“I thought it was going to take heaven and earth to strip the winner. Don’t expect the unexpected, just like the Indianapolis 500.”