INDIANAPOLIS – Watching Fernando Alonso and McLaren make five qualification attempts on Saturday, only to fail to make the top 30 for the Indianapolis 500, was like watching Michael Jordan or Lebron James miss shot after shot after shot.

It was like watching him play for the Washington Generals, the longtime hapless opponent for the Harlem Globetrotters in basketball.

The two-time Formula One World Champion arrived for his second Indianapolis 500 attempting to win his version of auto racing’s “Triple Crown.” That includes a victory in the Grand Prix of Monaco, the 24 Hours of Le Mans and the Indianapolis 500.

At the end of Saturday’s qualifications at the Indianapolis Motor Speedway, Alonso was 31st in a qualification session where the top 30 are locked in to the 33-car starting lineup.

Alonso has one final shot at making the race. It comes in Sunday’s Last Row Shootout, which will be televised on NBC beginning at Noon ET, weather permitting. It will be followed by the Fast Nine Shootout and the battle for the pole position.

There is a morning practice session for the six cars in the Last Row Shootout from 10:45-11:15 a.m. ET. After that, Alonso will have one last attempt, with the three fastest four-lap averages earning the final spots on the grid.

Alonso is four laps away from making the field or going home – a bitter disappointment for a driver that was such a big hit and popular figure in his first Indy 500 in 2017. 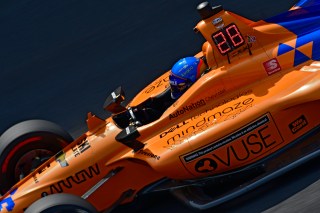 The 37-year-old from Spain has faced pressure before. He was just 24 when he became the youngest Formula One World Champion in 2005.

How will he approach his final qualification attempt for the Indy 500?

“The same as today,” Alonso said. “I think today I approached like they were the last four laps.

“You try to go in and more or less you are happy with your run, but then when you see the times, it’s not enough, obviously. There is not much we can do at the moment.

“Tomorrow we’ll try to do these four laps clean, no mistakes, try to be flat all four, and then if it’s enough to be in the top three of the six, we’ll take it, and we will try to do a good race.

“If it’s not enough and we are fourth of six, it’s what we deserve. There were maybe three cars quicker than us. So, nothing we can do more than that. Try to execute the runs tomorrow the best we can, and same thing with did today, stay calm, stay focused, and yeah, try to do a good job.”

It’s been a week of obstacles, errors, calamities, and humiliation for the McLaren IndyCar team. It’s a far different program than in 2017 when McLaren joined forces with Andretti Autosport.

That year, he had a powerful Dallara-Honda prepared by Andretti with Andretti engineers and crewmembers. This year, McLaren has tried to build its own IndyCar team with the cars built and prepared in England. Instead of Honda, the team was aligned with Chevrolet. Additionally, they are receiving engineering help from Carlin.

But that operation is struggling in this year’s Indy 500 as rookie Pato O’Ward of Mexico and veteran Max Chilton of Great Britain will also be in the “Last Row Shootout.” The only Carlin driver to make the top 30 was Charlie Kimball, 20th with a four-lap average of 227.915 miles per hour in a Chevrolet.

An alternator issue on Tuesday brought an early end to the team’s on-track effort. Then, Alonso crashed in the Turn 2 wall just one hour and 34 minutes into Wednesday’s practice. The team had to bring out the backup car, but had problems getting it prepared in time and was unable to return to the track on Thursday.

It had a rather uneventful, but slow, day of practice on Friday. It did one final practice on Saturday morning and after running a lap at 228.065 mph, McLaren was confident it could make the top 30 in qualifications. 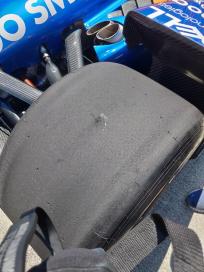 “We have a rear-right puncture and that didn’t help,” Alonso said after his first attempt. “Our performance has been quite bad all week and quite poor. If we add to that by withdrawing and doing the run now with this strong wind and have a puncture with the tire, the combination is quite bad.

“Hopefully, by the end of the day we can have a better shot.

“I don’t know when it happened, and we are not very competitive any way, so we don’t have any downside on that. The confidence is what it is. We saw this morning; we could be in the 228s (miles per hour). When you are borderline and have that drawing and a puncture, it is quite bad.

“Another chance will be in our hands and we’ll take it.”

“The team was not totally ready for the challenge,” Alonso said. “We’ve been slow. Juncos crashed yesterday and were ready to go today. That’s impressive for us. We’ve been a little bit slow for everything.

“It’s disappointing. But that is more a question for McLaren.

“It would be nice to go into the race, but it’s not in our hands. You get the speed of the car. I cannot go for much more.”

After O’Ward bumped Alonso, the Spaniard completed a four-lap run that began at 4:40 p.m. but the four-lap average was 224.414 mph.

Hildebrand returned the favor by bumping Alonso out of the top 30 with a four-lap average of 227.908 mph in an attempt that began at 5:41 p.m.

At 5:50 p.m., the gun was fired to end qualifications, and Alonso, who had been sitting in his race car since his second qualification attempt began at 3:47 p.m., climbed out of the car. He was immediately surrounded by media and photographers.

He jumped over the pit wall but was followed by NBC’s Kelli Stavast to get his reaction at missing the top 30.

“I have one last attempt, another chance to get into the race,” he told Stavast. “If we take it, ok. If we don’t take it, we don’t deserve to be in the race.

“We’ll try to do one last clean run and hopefully that will be good enough.”

As he ran through the pits, he would stop here and there to sign an autograph. Some fans would even rudely burst into the mob to take “selfies” with the driver, oblivious to the fact he was bitterly disappointed at not getting locked into the starting lineup.

How could Alonso, a driver that had been through heartbreak this week at Indy, still find time to sign autographs?

“They are out of the emotions and out of the environment that you are in on that moment. Maybe you jump out of the car, but for them it’s like you were walking there. They didn’t see what you were doing the last 10 minutes. So, it’s not something that they can control. You try to be nice with most of them, but I understand that a lot of them, they are not happy at the end of the day. So, you try to do the best way you can.”

It’s been an intense and frustrating week for both Alonso and McLaren, and it all came to a head on another disappointing day.

“Definitely it has been a difficult day again, difficult week in general but difficult day,” Alonso said. “The run in the morning maybe the conditions were not too bad. We thought that it was not a great number, but the teams were moving quickly, and we went out around 1:00. So I think the conditions were okay, but we have a rear puncture at that time, so we wait now until the afternoon to see the conditions, see if they were a bit cooler, and they did, so yeah, we took the chance another two, three runs to improve.

“We slightly improved the average lap, but it was not enough to be in the top 30 unfortunately, so we need to try again tomorrow, and now stay calm. Obviously, it’s a difficult moment for everyone in the team and for me, but there’s not much we can do now.

“We will try to do something overnight, but as I said, there is not much we can find from one day to the next.

“Hopefully it’s enough to be in the top three positions tomorrow of the six.” 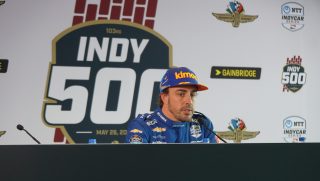 There are many in the Formula One crowd that look down at the NTT IndyCar Series and smirk, thinking it’s lower technology and less sophisticated than Formula One.

McLaren and Alonso have discovered this week the NTT IndyCar Series is pretty strong, especially when it comes to making the ‘500.’

“I think that part is obvious,” said owner/driver Ed Carpenter, who place all three of his cars in the Fast Nine including fastest of the day Spencer Pigot. “The quality of teams, drivers from top to bottom in the series I think is world-class.

“You just have to look back to last year, the types of drivers and teams that were not in the show, and even today, you look at who was fighting for that top 30, in and out, in and out, it’s not easy, and I don’t think they expected it to be easy.

“I think it’s a world-class field. I think it’s not just drivers here that would tell you that. I think there’s enough respect around the motorsports industry for the talent that’s here.”