INDIANAPOLIS – James Hinchcliffe has lived this nightmare before when he failed to make the field for the 102nd Indianapolis 500 in 2018. Most nightmares come to an end, however, as soon as someone wakes up.

In the blink of an eye Saturday, in qualifications for the 103rd Indianapolis 500, the nightmare returned.

Hinchcliffe began his initial qualification attempt at 1:20 p.m. Eastern Time and had just completed a fast lap on the first of four laps around the 2.5-mile Indianapolis Motor Speedway.

But on the second lap, Hinchcliffe’s Honda did a half-spin in Turn 2 and made hard left-side contact with the SAFER Barrier. The car rotated onto its left sidepod as it slid down the track and landed on all four tires before coming to rest on the backstretch.

Hinchcliffe was able to climb out of the car with help from the AMR INDYCAR Safety Team.

Unlike last year, when Hinchcliffe was bumped out of the 33-car starting lineup by Conor Daly with 20 minutes remaining in the session, there was time to correct the issue.

Last year, Hinchcliffe attempted to make a second attempt but had a vibration on his next qualification run. After correcting that problem, he was the last car in the inspection line waiting to go out before qualifications ended.

After his crash on Saturday, his Arrow Schmidt Peterson Motorsports crew quickly prepared a backup Arrow Honda with crewmembers from all three SPM teams pitching in, including teammates Marcus Ericsson and Oriol Servia.

The backup car was ready to roll about 4 p.m., and Hinchcliffe and crew returned to pit lane to the cheers of the fans at the Indianapolis Motor Speedway. When team co-owner Ric Schmidt was asked by NBCSports.com if he felt this was “Groundhog Day?,” he replied, “Yep.”

The popular driver from Canada gets one more attempt in Sunday’s “Last Row Shootout.” Coverage will begin on NBC at Noon ET.

He is one of six drivers fighting for the final three positions in the 33-car starting lineup. The others include two-time Formula One World Champion Fernando Alonso, IndyCar regulars Max Chilton and Pato O’Ward from Carlin, and part-time drivers Kyle Kaiser of Juncos Racing and Sage Karam of Dreyer & Reinbold Racing.

Hinchcliffe must reset his mind and make one final four-lap attempt to make the Indianapolis 500 field for the first time since 2017. 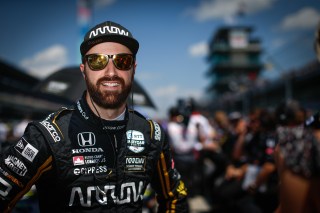 “Honestly, it’s part of our job,” Hinchcliffe said. “It’s what we do. It’s not the first time we’ve crashed. Probably won’t be the last. So, you just have to be able to put these things behind you and close the visor tomorrow and do it again.”

Hinchcliffe’s team did an incredible job getting his backup car together and ready to go in just under 3 hours.

“Huge credit to everybody at Arrow Schmidt Peterson Motorsports, it was a big effort from the whole team to get that car out there,” Hinchcliffe said. “Everybody from each team – they jumped in and helped.

“It’s a road course car, so it doesn’t have all the extra love on it that the oval cars, the superspeedway cars have, so we weren’t really sure what to expect. We came out, made some changes and found some speed, certainly. Obviously, it wasn’t quite enough today.

“Luckily, we’ve got a chance tomorrow. I’ve got a lot of faith in the crew, everybody at Arrow, everybody at Honda, they’ve done great today to rebound from a pretty bad situation. We just have to put our heads together, find a little speed on it tomorrow and come out and put this thing in the show.”

Hinchcliffe’s accident was a big hit, but he was able to escape the massive impact uninjured. He made a quick trip to the IU Health Infield Care Center where he was examined and released.

“The car was a little bit loose in (Turns) 3 and 4 but in 1 and 2 was solid, so actually I was just preparing to dial a bit of understeer in for the north end of the track,” Hinchcliffe explained. “I don’t know if we caught a gust or the wind changed or what. When it’s windy and it’s gusty and you’re in low downforce for qualifying, unfortunately that’s the risk you run.

“I got to (Turn) 2, and it just sort of suddenly snapped on me. I don’t know if it was a gust of wind or what. Worst-case scenario is doing it again tomorrow.

“We’re prepared. Obviously, this team is … they’re professionals. They know these things can happen. I’m not worried about getting back out. We just don’t know what kind of pace we’re going to have until we get there.”

“It’s pretty much worst-case scenario. It’s pretty much our nightmare. But I have a lot of faith in the Arrow guys. We’ll get one back together, and we’ll get back out there tomorrow.”