INDIANAPOLIS – When INDYCAR President Jay Frye added a “Last Row Shootout” to Indianapolis 500 qualifications, it was designed to give teams and drivers that had bad luck on Saturday an extra chance to make good.

At the Indianapolis 500, it should have been named the “Hinchcliffe Rule.”

Last year, Hinchcliffe picked the wrong day to have a bad day in Indy 500 qualifications. He was bumped out of the field by Conor Daly but remained confident he could easily get back into the race with another qualification attempt. But when he went out, his car suffered a bad vibration that brought him back to the pits.

The issue was corrected, Hinchcliffe got back in the tech line, but the qualification time ended before he got a chance to make another attempt as Pippa Mann was still on track when the gun sounded to end qualifications.

The most popular driver in the NTT IndyCar Series was left out of the starting lineup and he vowed that would never happen again.

During his first qualification attempt on Saturday, Hinchcliffe’s car slammed into the Turn 2 wall on the second lap of his four-lap attempt. The Arrow Honda was damaged, and the Arrow Schmidt Peterson Motorsports crew quickly prepared the backup.

Hinchcliffe made a few attempts late in the day but could not get the car up to speed to make the top 30. That put him in a group of six drivers vying for the final three positions in the 33-car starting lineup in Sunday’s “Last Row Shootout.”

Rain delayed the schedule 12:15 p.m. Shootout to 4:30 p.m. Hinchcliffe was the first of the six drivers to make an attempt and his four-lap average was 227.543 miles per hour.

He had to wait to see if three of the five remaining drivers could top that speed. The only driver out of that group that went faster was Sage Karam, who qualified at 227.740 mph over four laps.

When Kyle Kaiser was the last of the six drivers to make an attempt, he bumped Fernando Alonso from the field and Hinchcliffe had made the race. 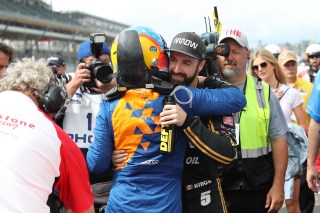 “I just want to say congrats to the other guys that made it in and comprised the last row,” Hinchcliffe said. “And just my heart goes out to the ones that didn’t make it, to Max (Chilton), Pato (O’Ward) and Fernando (Alonso). We all know how much goes into this race and how much this means to everybody, and I’ve been on the other side of this a year ago, so I know how much it sucks. I hate that we have to send guys home today.

“When I got out of the Med Center, I told everybody there’s no way we’re getting back on track yesterday. It just shows what I know. Everybody on Arrow Schmidt Peterson rolled up their sleeves and went to work, and we had the backup car out on track two and a half hours later, which is just incredible.

“It’s a road course car, it wasn’t really built for speedways, it didn’t have all the trick bits on it. But being able to get out there with enough time left to do three runs gave us a lot of information, a lot of data that we could kind of look at overnight and spend long nights working on the car trying to make sure we had the speed today, and man, it’s a nerve-racking feeling knowing that you only have one shot to get it done at this point, and with the weather moving in and being first, that was the same thing that happened to us last year, which was certainly not lost on anybody in the garage.

“Ultimately everybody at Arrow Schmidt Peterson, we took some parts off Marcus Ericsson’s car, everybody from Honda that pitched in to get us in there, man, it’s crazy. It’s way more dramatic.

“I’m getting too old for this stuff. I need a week off now, but we’ve got to be back in the cars tomorrow.”

Hinchcliffe’s situation is perfect proof at why Frye’s idea to give teams and drivers that had trouble on Saturday, one last chance to make the 33-car starting lineup, was a great idea.

“We got a car back on track yesterday, and had it been the old rules, we would have had three more chances and we just would not have got in. We’d be sitting here 365 days later in the same seat we were a year prior, which would have been just devastating.

“For me I think it’s great. It does add a little bit of drama. I think as long as we have enough cars to make it a cool session, which today we did, and — I mean, it was close.

“Good job, man, that was crazy. I was nervous. But yeah, no, I think it’s a cool thing. Hopefully the fans enjoyed it, and it kind of made today a little extra special for everybody.”

After getting a “Mulligan” after Saturday’s crash, Hinchcliffe delivered on Sunday by hitting it, “straight down the fairway.”