INDIANAPOLIS – There are two types of conditions race drivers fear when it comes to qualifications for the Indianapolis 500 – a hot surface and wind.

Colton Herta, 19, had no fear of either when he made the first of his two qualification attempts in Saturday’s Indianapolis 500 time trials.

The hotter the track, the harder it is for the race car to maintain grip. The windier the conditions, the more difficult it is to keep control of the car.

At 2:14 p.m. ET on Saturday, the temperatures were in the high 80s with gusty winds.

No problem for Herta, as he went out and ran a four-lap average of 229.033 mph to put him firmly in the “Fast Nine Shootout,” scheduled to run today for the Indy 500 pole, weather permitting.

Other cars and drivers, though, would move into the “Fast Nine”, and Herta knew he had more speed in his No. 88 Harding Steinbrenner Racing Honda. He was down to eighth place in the “Fast Nine”, and there were other drivers waiting for the final hour, when track conditions are better suited for grip and speed.

Herta didn’t want to wait and returned for a second attempt beginning at 4:44 p.m., when it was still quite hot.

The kid ran even faster, with a four-lap average at 229.478 mph and moved from eighth to fifth in the “Fast Nine.”

One of the first to congratulate Herta was his father, Bryan. As a team owner, he has won the Indianapolis 500 twice, including the late Dan Wheldon’s win in the 100th anniversary race in 2011 and the 100th Running with Alexander Rossi in 2016. 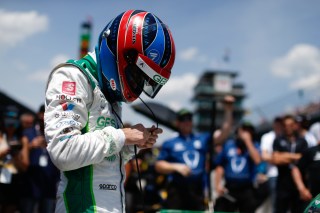 Herta is in charge of Marco Andretti’s car at Andretti Autosport.

As a driver, Bryan Herta competed in five Indy 500s with a best finish of third in 2005.

“He has respect for this place,” Bryan Herta told NBCSports.com on pit lane after his son’s run. “Maybe he doesn’t fear it, but he respects it, and that is all that you need.

“I’m off the charts when it comes to pride. I’ve been here on a hot, windy day, fully trimmed out. I know how hard it is to put four laps together. And he did it twice under the most harrowing conditions that we’ve had in qualifying here at the Indianapolis Motor Speedway.

“I’m very, very proud of him. When I talk to him, he doesn’t seem like a rookie. At no point did I ever feel he was over his head with this. You can win this race from anywhere, but he’s doing all the right things. He has a great shot.”

Some may call it a case of “He doesn’t know, what he doesn’t know.” But young Herta has unbelievable talent and poise for a driver who just turned 19.

“Middle of the second row isn’t bad if it rains Sunday,” Colton Herta told NBCSports.com. “It was tough on both runs because of the conditions. The last run we made; the car was more trimmed. But the first one, the car was glued down to the track despite the fact the track was hotter. It counteracted how hot the track was. It wasn’t terrible, actually.”

Young Herta believes his Harding Steinbrenner team has prepared a good race setup for next Sunday’s 103rd Running. Starting in the middle of Row 2 is a great starting position.

“It’s possible to win from anywhere; but it definitely helps when you start up front,” Herta said. “I knew we could probably make the Fast Nine if we did it perfect. I didn’t think we were going to be fifth. I thought maybe seventh, eighth, ninth was more realistic. It kind of blew my mind.

“We trimmed it on that last run and just kind of went for it, and yeah, the car was even a little better than it was on my first run.”

Troy Ruttman is the youngest Indy 500 winner in history; he won the 1952 race at age 22. Herta believes he has a great chance to break that record.

With his win in the IndyCar Classic at Circuit of the Americas on March 24, he was just a week short of his 19th birthday.

“I have a few chances to get the record (for youngest Indy 500 winner),” Herta said. “I’ll be trying this year, for sure.

“If we don’t, we’ll have three more chances after that.” 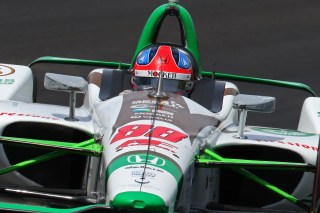